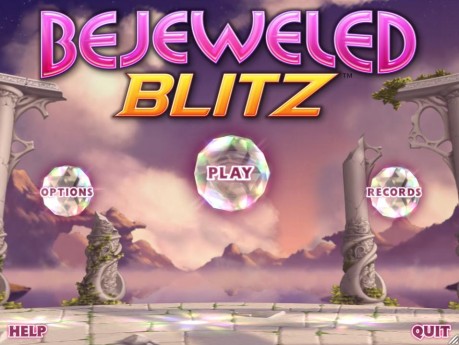 Gameplay:
The basics are still the same as you would find in any other bejeweled game. By making sets of three of the same color jewel, you will eliminate those three jewels. However in your normal Bejweled game, you can continue until you decide to either quit or until you can not make any moves.

This isn’t your normal Bejeweled and shouldn’t be treated as such. Because the added on Blitz to the name isn’t just for show, the games are fast and if you are only moving one crystal without looking what to do next quickly then time will run out. Each game of Bejeweled Blitz only lasts for one minute. There are add-ons which will extend the gameplay, but only for five extra seconds.

As you play through Bejeweled Blitz, you will receive coins that can be used to buy power ups for the next three games. Also, if you sync the game up with your Facebook account, they will automatically provide a free 1 million coins which is quite helpful. The power ups are; scrambler which mixes up the board pieces, +5 seconds which is self explanatory, detonator which explodes any special gems on the board, a free multiplier which spawns a multiplier jewel at the beginning of the game, and finally mystery gem which spawns a special gem at the beginning. Three can be chosen for each match.

The special gems really add a lot of spice to the game and when one comes into play it can create a huge speed and point boost. There are a variety of special gems starting with the fire gem which detonates and explodes any gems around it when matched. A star gem which will annihilate every gem in a giant cross with electricity. Then there is the multiplier gem that will 2x, 3x, 4x, etc. your score after activating the gem. And finally the grand gem of them all the Hyper Cube, which will eliminate every gem of the same color you swap it with. These are obtained through matching 4 of the same color, a cross of the same color, and 5 of the same color respectively. 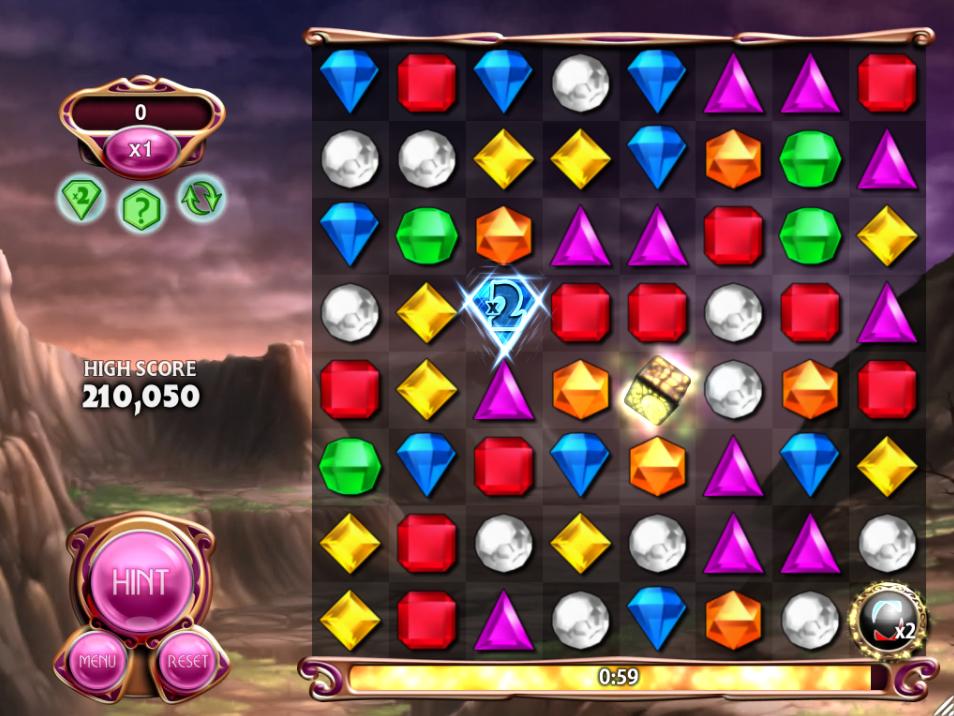 There are badges that can be awarded for certain conditions being met. These are something like achievements, as they are only unlocked when the condition is met. They start from bronze, all the way up to ruby and beyond. They aren’t much but they are a small reward for your game playing prowess and the time you’ve put into Bejeweled.

I greatly enjoyed the fast paced and short games. Many times there will look like there is literally no move available, and you could spend five to ten seconds peering at the screen. However once a match is found you can build on the match and start putting together amazing combinations and explosions using the special gems. With the multiplier special gem, scores can sometimes reach well over 500k+. With being hooked up to Facebook, you can compare your scores with all of your friends as well which is a handy little feature.

Graphics:
The high point of BB is the explosions and electric shocks produced by the special gems. Other than that the other gems and the transitions are what you’d come to expect. Everything is very crisp and well detailed but that is about all there is to say for that. The colors are bright and enjoyable, though some option to modify the colors of each gem could be a nice little edition.

There are a small number of backgrounds available during the game. They are not selectable however and are completely random. There will be many times that the same background will appear multiple times without any change. This is an unfortunate issue but only a small complaint over an otherwise great looking puzzle game. 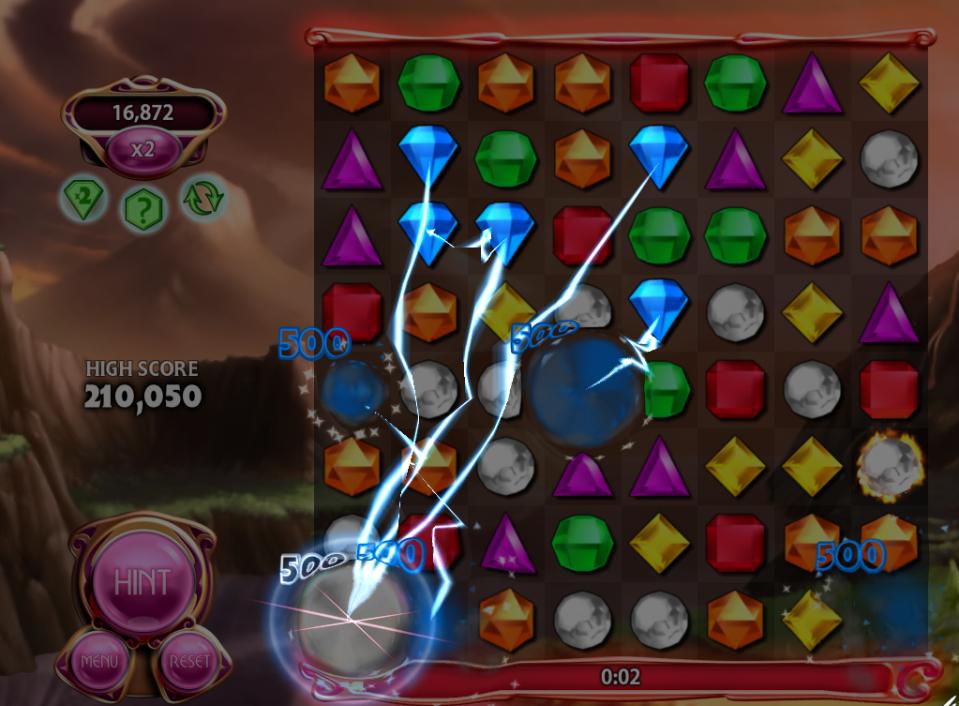 Sound:
The music is very soothing when you play the game, at least that is until your time begins to run out. The instrumental music slowly grows more fast paced and urgent sounding as the time counts down. This can sometimes cause a rush of confusion as you hurry to quickly gather points or help as you match to the faster beat of the song.

Then there is the announcer who will constantly be announcing your times and giving you compliments if you combo together a large amount of jewel combinations. The voice they used sounds a bit out of place, like something one would expect to hear in a Mortal Kombat game. Might be a bit out of place for a game that is more for the casual crowd.

Overall:
This is a great game for a time waster, and is definitely good enough to take your attention away from important things(like writing this review for instance). Bejeweled Blitz’s fast gameplay and insistance on speed will constantly have you trying to beat your latest high score and rank further among your friends. Despite some graphical lacking and a brutal sounding announcer Bejeweled Blitz is a great puzzler.

I give Bejeweled Blitz