If the game feels similar to Devil May Cry, there is a very good reason for that.  The game was directed by Hideki Kamiya, who also developed DMC, in cooperation with SEGA.  To say the least it is one crazy game, and it is sure to spark debates everywhere on who would win in a fight, Bayonetta or Dante?

Bayonetta is an action game where you slaughter the angels from Heaven, in many different and crazy ways and places.

You play as an Umbra Witch named Bayonetta, who has woken up with absolutely no memory, after 500 years of sleep in the bottom of a lake.  Shortly after beginning you are entered into a battle against the legions of Heaven.  Yes Heaven, unlike most other games, you are fighting against angels instead of demons. 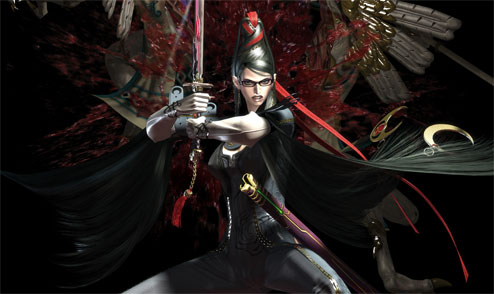 Avoiding the largest of spoilers, Bayonetta is searching for a gem stone called the eye of the world, and is told that it might have a possible link to her past. From here you depart on a journey across the town of Vigrid, both in the realms of mortals, and Paradiso.

The story mode for this game is strictly linear.  Though some may view this as unfortunate, there is still a small amount of exploration and secrets hidden throughout the levels, that if you rush through, you might miss something hidden simply behind a few rocks easily smashed out of the way.

There are also portals called Alfheim Portals, hidden in each level that require you to defeat a certain amount of angels in a certain way, within a certain time period.  Such as defeating a large angel, using only a certain amount of punches and kicks.  These challenges can be very frustrating at the start, but they are, however, very rewarding as completing a challenge will give you a quarter of a heart, which after collecting four will increase your health bar.

The graphics for each area are stunning and have realistic color tones.  Though this means more of a brown look for the city, you won’t be spending much time there.  From the ocean to the train station, each of the levels are amazingly well done.  Though there are many invisible walls which may cause you to jump off a ledge, thinking you can reach the pedestal beyond, only to end up falling and losing health from a wall. 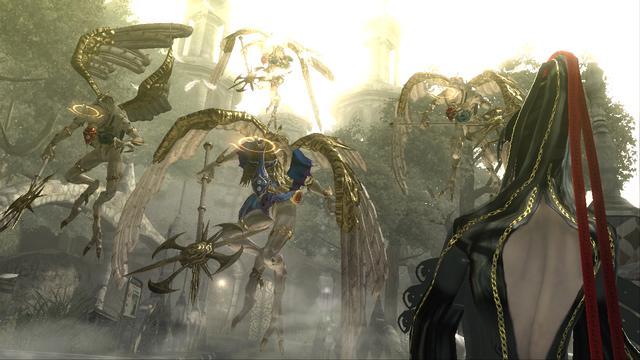 Each of the angels is very well done and stylized.  The angels take their appearances from both western and eastern religions, varying from serpents and flying cherub heads.  The angels also show damage, if you do heavy damage to a leg, plaster like flesh will fall off and expose muscle or organs beneath it.  This is especially the case with some of the larger monsters, where the damage will be hard to miss.

And now to our heroine, Bayonetta.  Her character design is very tantalizing, especially when you realize that her entire outfit, is made of her own hair.  Better yet, when you execute what is called a wicked weave attack (explained later) nearly all of her hair is put into the attack, leaving her in a swimsuit like outfit left.

Though also when you are executing a climax finisher on a boss, Bayonetta uses all of her hair, leaving her character model covered modestly by a stream of hair and ribbons.  It was very interesting to see how far the limits were pushed when it comes to censorship.  Thankfully the amount of fan service is used only when it makes sense, and never gratuitously. 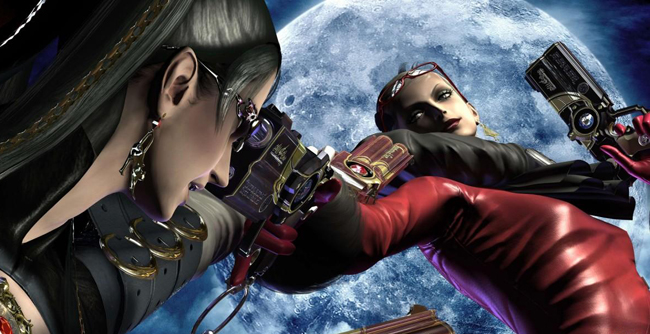 There are two types of cut scenes, and frankly both are very amazing to watch.  The first kind is where you will be watching your run of the mill cut scene, but it is always good to keep your fingers on the controller, because you never know when a quick time event show up.  Though there is another type of cut scene which treats the game like a film strip.  Showing only photos like a slide show, but with full voice acting.  Though this may seem cheap, the scenes portrayed in this method are more dramatic because of it.

Here is where the game really takes off, with the hectic and enjoyable gameplay.  The fighting is very well done and it is easily accessible to anyone.  During load screens the game will show you various combo’s you can perform, so as opposed to viewing a loading screen picture, you are able to test out the various combos and learn exactly what you want to use.

There are also a variety of different weapons available, which you can obtain by getting Golden LPs.  These weapons vary from everything to a whip, and bazookas.  The special part of this is, you get two weapon sets to equip.  One you equip to your hands, and the other to your feet. There are numerous combinations you can make, unleashing new devastating attacks.
Speaking of the attacks, the wicked weave attacks that I mentioned earlier are one of the most unique attacks I’ve ever seen.  At the end of a combo attack, Bayonetta will turn her hair into a giant fist, or foot, or sword blade, and slam it into the enemy dealing extreme damage.  When this happens she can also transfer into another wicked weave attack depending on the combo attack.  These are surprisingly easy to do and many of your combinations will end in these types of attacks. 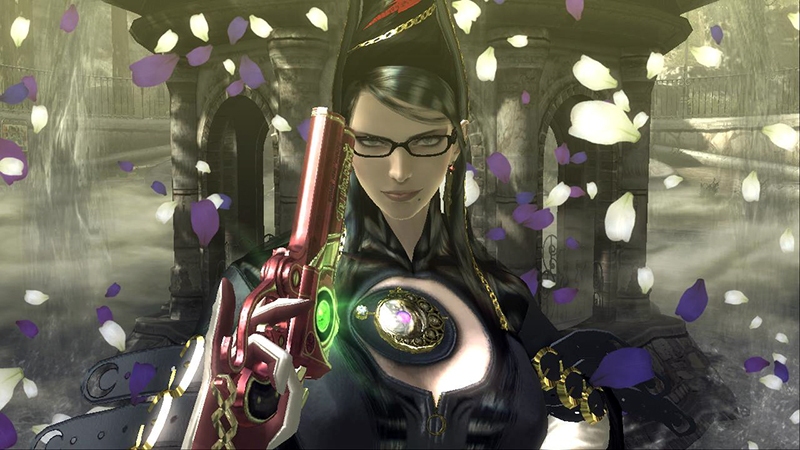 There is yet another unique feature when it comes to the battle system of Bayonetta.  When successfully dodging an attack, you will enter a period of slow motion called Witch Time.  During this mode, there will be a purple aura on the screen, and everything around you will be in slow motion, except for yourself.  This allows you to unleash a string of attacks to destroy your angelic opponents quickly and safely.

After a certain period of time, you will fill up your magic bar and when that is done, you can unleash an extremely powerful, though sometimes odd, execution attack.  Each execution attack will vary depending on what type of enemy you are facing.  Though to say the least you will be seeing everything from tombstones dropping on angels, to giant chainsaws appearing out of thin air, to even a wooden horse.

However in the midst of battle, you can be stuck in a very tight space, and the camera will completely go inside the wall and you won’t be able to see anything, leaving you to the mercy of your dodging ability until the camera fixes itself.  You can control the camera by turning it left and right, but this only helps occasionally.

At the start there are only three difficulties to choose from, from Very Easy, Easy, and Normal.  The first two difficulties offer a very unique feature, the ability for the game to play itself.  The only player input needed is to push one or two buttons and the game will just let you enjoy the game.  Playing through on Normal does not offer this feature, and you will play through some tough battles that are still quite deadly.  Beating the game unlocks Hard, which further increases the strength, health, and variety of the angels you will face.  There is also a mysterious mode for when the game is beaten on Hard that will challenge you to a completely different fight.

This game is very hard to pass up, especially if you are a fan of fast paced action games. There is little wrong with the game, minus the occasional invisible wall, or camera angle the game is superb and will stay in your memory for quite some time.

I rate this hair raising game with 8.5 Capsules out of 10