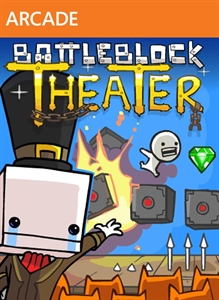 Overview
First with Alien Hominid and then again with Castle Crashers, The Behemoth has proven that they know how to make fun and interesting games. Their newest game has just been released as BattleBlock Theater as another platforming brawler with plenty of story levels and, with user created content, endless multiplayer levels. With all of this content does BattleBlock Theater match its predecessors, surpass them, or fall short of the mark? Read on to see. 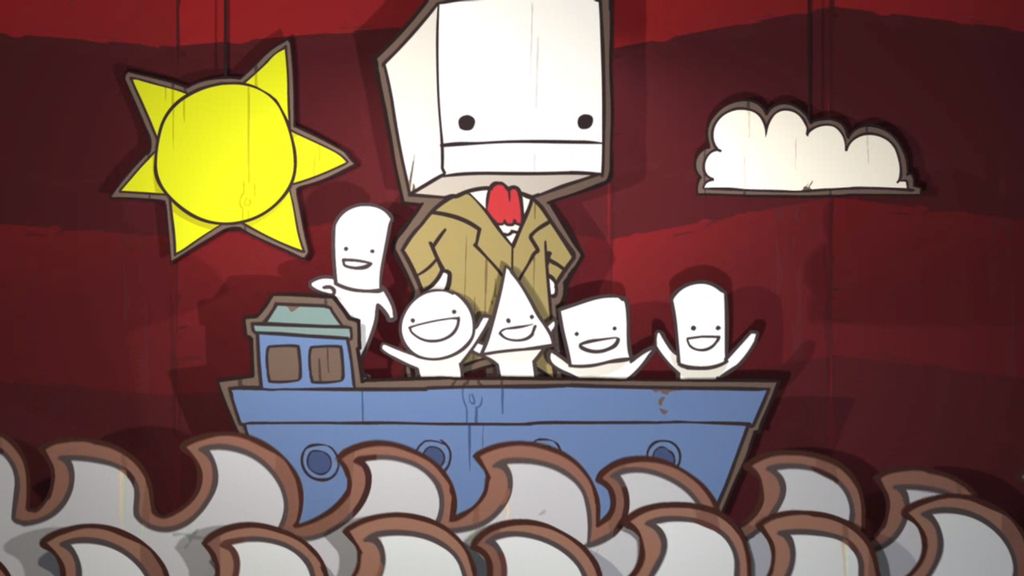 Story
Why, just look at all those happy faces up there all sailing on that boat. The story of BattleBlock Theater opens with a scene of good friends and great times in addition to a top notch narrator that matches the humorous style of the game. In truth the narrator is one of the best parts of this game, sounding like a ADHD addled youth spouting ridiculous and funny things that fit well with its Teen rating. Trying to describe it will not and can not do it justice, so to see what I mean definitely check out the trial.

As the narrator continues the story, the premise is found to be one lucky survivor of a shipwreck must find and collect his friends while braving a series of trials for the enjoyment of an audience of evil cats. Looking at what I just wrote goes to show that this is indeed a game from The Behemoth, seeking fun over logical and excelling all the more for it. Those that enjoy the humor from their previous work are sure to get a kick out of the story of Hatty and all the friends, as it draws them in until the end. 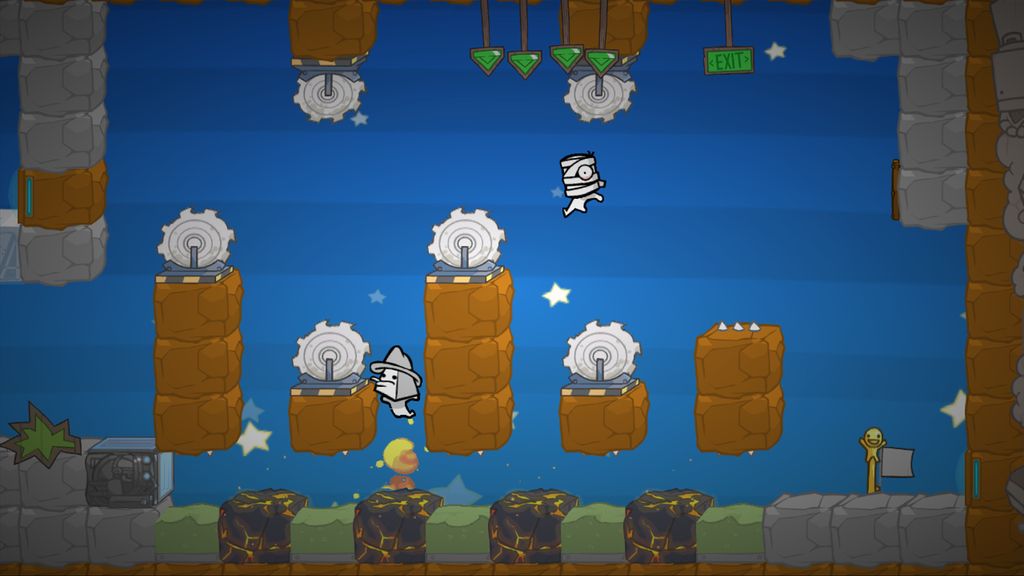 Gameplay
The story mode for BattleBlock Theater is divided into several worlds that are each divided into a set of standard levels, finale levels, and encore levels. Every level tasks players will collecting gems, with additional collectibles as well such as yarn, to simply pass a level players must collect 3 gems to open the exit, but those that are looking to get an A+ rank will have to collect everything and in a quick manner. Fairly standard platforming gameplay, yes, but the little things all add up. Levels have checkpoints throughout them, which allow an instant respawn as to not penalize the player too much for dying in a game chalk full of death. Players that have friends or can find strangers on the internet can even go at it in a co-op mode that forces both players to work together, while dying a lot.

The character has a nice arsenal of moves to combat the enemies that appear as well, with the X button having several attacks to push enemies around and get some space, while the B button is mainly for doing damage including a ranged attack with different unlockable weapons that can be equipped from a frisbee mine, to fire balls, to grenades. The combat is easy enough to learn and a bit more difficult to master. For the most part the combat is great and fun to use against both the AI and other players in online matches, though one of the biggest problems is the unlockable weapons. The grenades are probably the most powerful, acting as a one hit kill when hitting an enemy, so it’s pretty much the only weapon players use in the multiplayer. Not terrible, but annoying to see, especially as the weapon unlocks are random creating a small power gap until finally unlocking them. 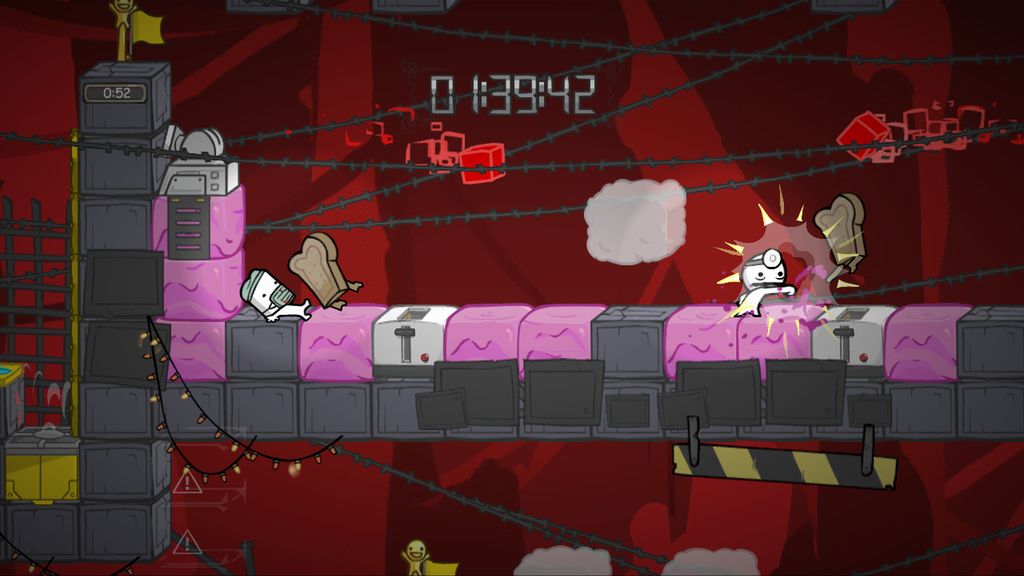 The multiplayer of the game, or The Arena, is well done and thoroughly inclusive, with one to four players splitscreen as well as online. This ensures that the game is equally fun and accessible for those interested in online play as well as being a silly fun party game. With 8 different modes of multiplayer, there is also plenty to enjoy and though most of them are rehashes of the usual fair of multiplayer games, deathmatch, capture the flag, king of the hill, but with a BattleBlock Theater twist such as flags being animals players ride to capture. Looking good and playing well, the multiplayer doubles the gameplay from just the story and provides a lot of content and fun.

Adding even more content to the game are the user created levels, BattleBlock Theater comes with its own Level Editor to let players make maps for specific game types and then put those maps together into a playlist. This lets players string together specific types of matches or a string of one type of match. While there aren’t too many to choose from just yet The Behemoth has created their own to help fill out those available, with any luck and player diligence the base of levels will grow in both quality and size, though barring that players can always make their own. 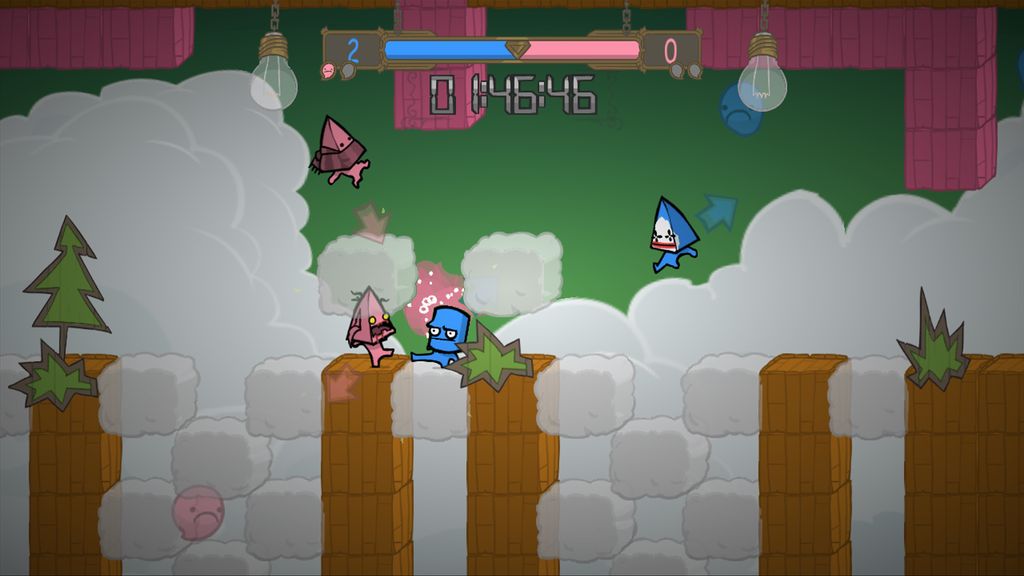 Visuals and Audio
The graphics of BattleBlock Theater maintains the look and feel of their previous games, with 2D hand drawn art and unique style. The look of the player has a lot of customization as well, with different colors and heads for players to unlock and use as they save more of the imprisoned friends. The audio side of it is equally well done, with the narrator mentioned earlier, as well as music that fits the game’s unique style. From the first time reaching the menu, to starting the story mode, to loading to up again and again, the music combines the aesthetics of zany action and carnival theater to immerse the player into the crazy world present, and maybe even a demented smile to their face. 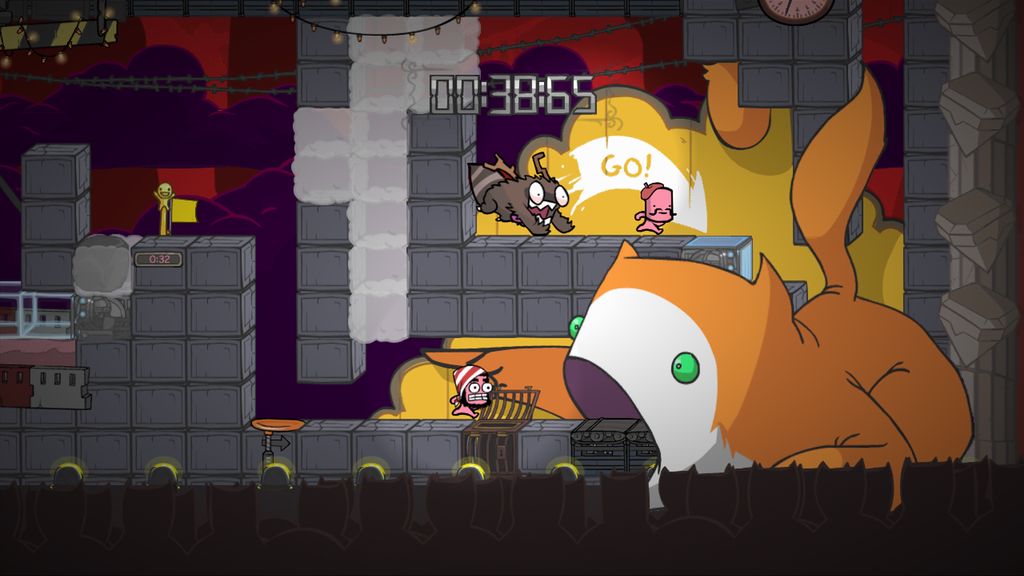 Overall
BattleBlock Theater is a great game from great developers that know what they are doing and have known since before they even got on to consoles. Packed with story levels, multiplayer, and the tools to build plenty more it is also a pretty good value for 1200 MS Points. The humor works well and is highlighted by a narrator that not only fits the ridiculous style, but adds another layer onto it. When compared to Alien Hominid and Castle Crashers, BattleBlock Theater has them beat, captured, and left to perform for the amusement of evil cats.