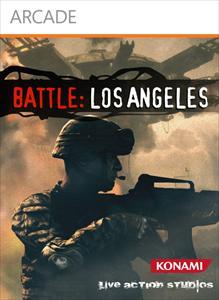 Overview:
Movie tie-in games often come out the same time as a movie does or a few weeks before in some cases. But what happens when a developer and publisher decide to go with a downloadable movie-game instead of a full retail version. Well you get Battle: Los Angeles which was released for the XBLA when the movie was released and on the 22nd for the PSN. Does Battle: Los Angeles do anything to throw off the stigma of being based off of a movie?

Story:
Let me first say that the game does follow the general plot of the movie. First mistaken as meteors falling to earth, Aliens have invaded Earth for some unknown reason and are currently taking over cities across the globe. In Los Angeles you play as Corporal Lee Imlay and you will be fighting alongside characters from the movie.

If only the actual story was presented in a decent manner. The introductory cutscenes, and between mission cutscenes are nothing more than stop motion comics that do little to explain what is happening exactly other than saying you are a soldier, here are the enemies, this end of your gun shoots bullets, point it at the enemies. The actual story that plays out through the game takes some of the best moments of the movie and chops them down to nothing more than simple objectives. 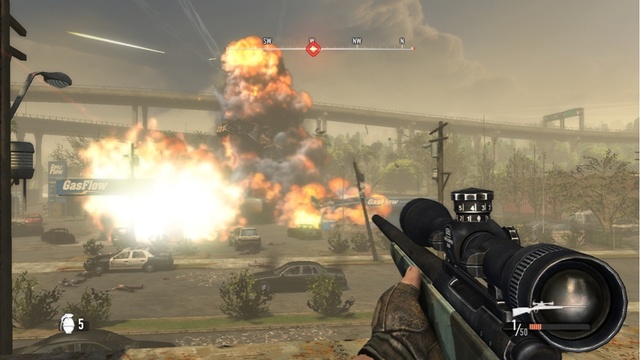 It is quite obvious that plenty of moments from the movie are cut out when you are actually finished with the story which will only take you around forty minutes to complete. There are some pretty big flaws when a game based around a movie can’t even boast playtime longer than the movie itself which clocks in at almost two hours.

Graphics & Audio:
Some of the moments in Battle: Los Angeles are hit and miss as far as graphics go. There are a number of moments when the B:LA actually shows off a decent destructible environment engine with bits of cover chipping away, highway signs breaking under gunfire and chunks or rubble being blasted away by the enemy.

Unfortunately besides that there is nothing impressive about B:LA. There are two different enemies with the player being able to use only three actual guns and one mounted weapon. The guns themselves feel quite off as the machine gun you use feels like it is literally being shot through water. The sound feels so muffled that there are times that you may not realize you are actually shooting your gun other than the ammo counter on the HUD ticking down.

Earlier I mentioned that the cutscenes take the form of stop motion comics that are unfortunately poorly drawn in quality. They are passable at best but do not do anything to instill a good feeling about the storyline. The only time any scenes from the movie are shown is through little pictures at the opening cutscene which can quickly be forgotten.  This goes double with the voice acting and the actual script.Aaron Eckhart returns to voice his character from the movie but unfortunately that is the highlight of the voicework considering the fact that everything else is as generic as possible whether it be the way the characters present themselves to the lines they say. 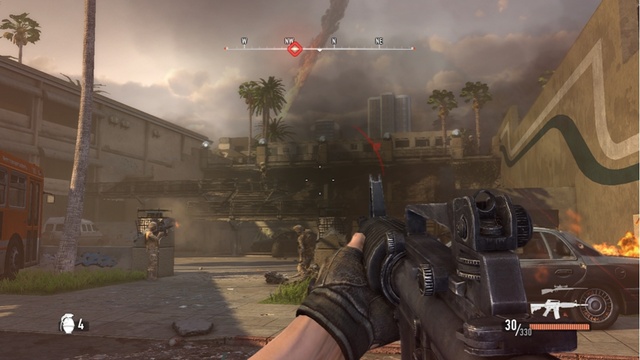 This comes double when you put together the fact that there is blatant in game advertising. It would have been one thing if there was a few recognizable franchises blended into the destruction, or it didn’t seem so forced. But unfortunately it is. If you aren’t shooting down the same alien again and again you are seeing a Sony Ericsson sign or an advertisement showing off the Green Hornet Blu-ray and DVD coming out soon.

Gameplay:
There isn’t a whole lot to B:LA’s gameplay beyond going from point A to point B and making sure that nothing is breathing in between you and that point. There are a couple of moments that you have to protect an ally or shoot down an aerial assault vehicle but that is unfortunately it. The gunfire from your four weapons can sometimes pass right through enemy aliens, even with a sniper shot directly to the head.

The character that players play as, Imlay, is also the worst Marine you could imagine even if he is carrying a whole bunch of equipment on himself. Players are only able to run a very short distance before he is breathing heavily and walking at a snail’s pace for a few moments. Either that or you can blast your fellow soldiers in the face for a little bit due to there being no friendly fire aspect.

Overall:
I really wish there was more to talk about and more information to give you involving the gameplay but at its best Battle: Los Angeles is a generic run of the mill shooter with aliens placed in the place of any normal enemy you could usually face. With a 800 MSP ($10) price tag there really isn’t any reason to take a second glance at B:LA unless you need a generic FPS to tide yourself over for a half hour.

I give Battle: Los Angeles