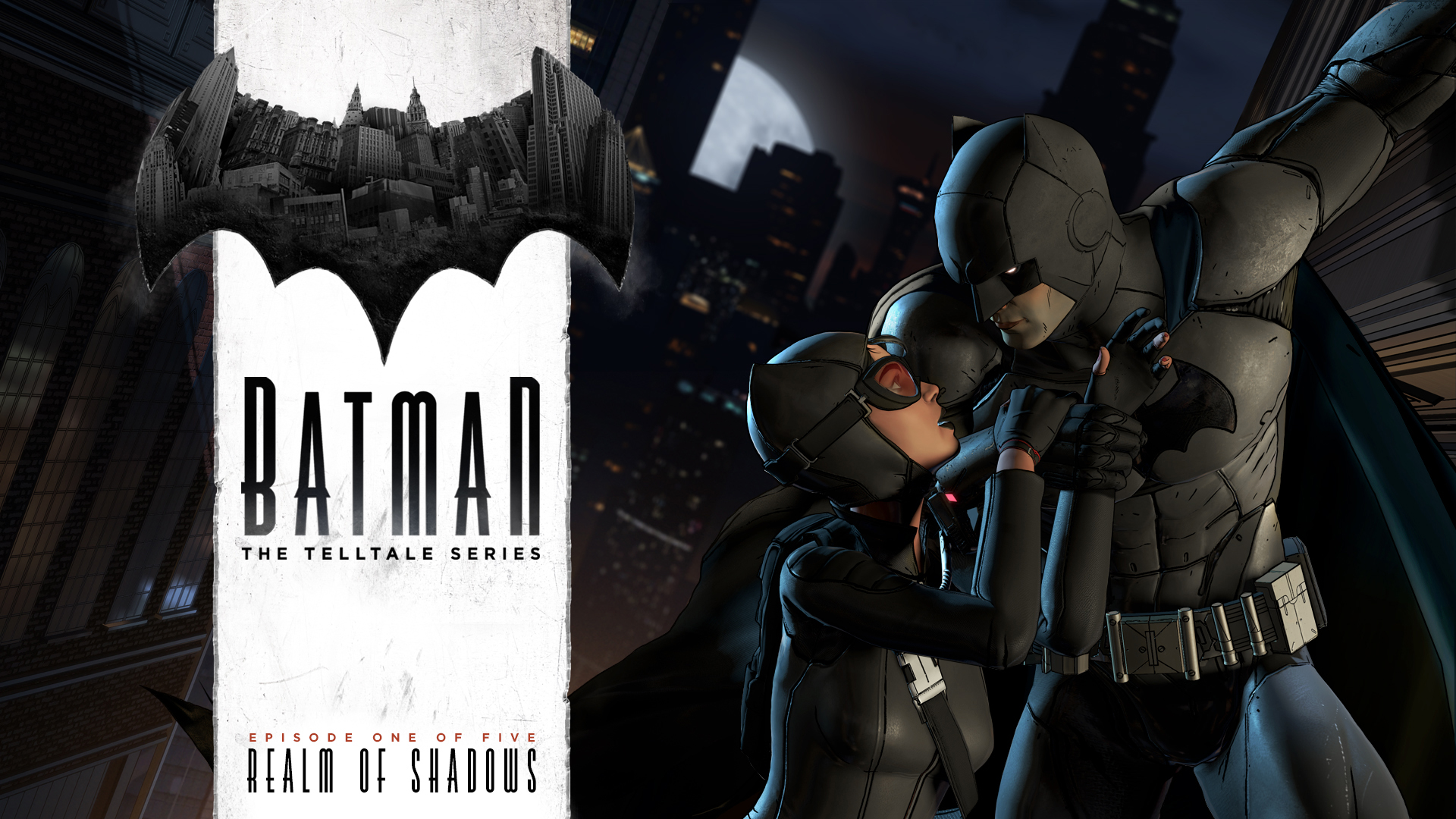 Batman has always been an extremely popular hero and in the past decade has appeared in more media than any other character. That being said, few expected Telltale Games to get in on the Batman action and when they announced that they would be producing an episodic series, many were wondering just how they would manage to pull it off. Well now that the first episode of Batman: The Telltale Series -Realm of Shadows has been released how does the series kick things off?

Batman: The Telltale Series kicks things off by letting players know that this isn’t a game that will be handling the criminal element of the series with kid gloves as a security guard is shot in the head as robbers break into city hall. While the police arrive on the scene, Batman is already prepared to take down the gunmen who are attempting to break into the mayor’s office. 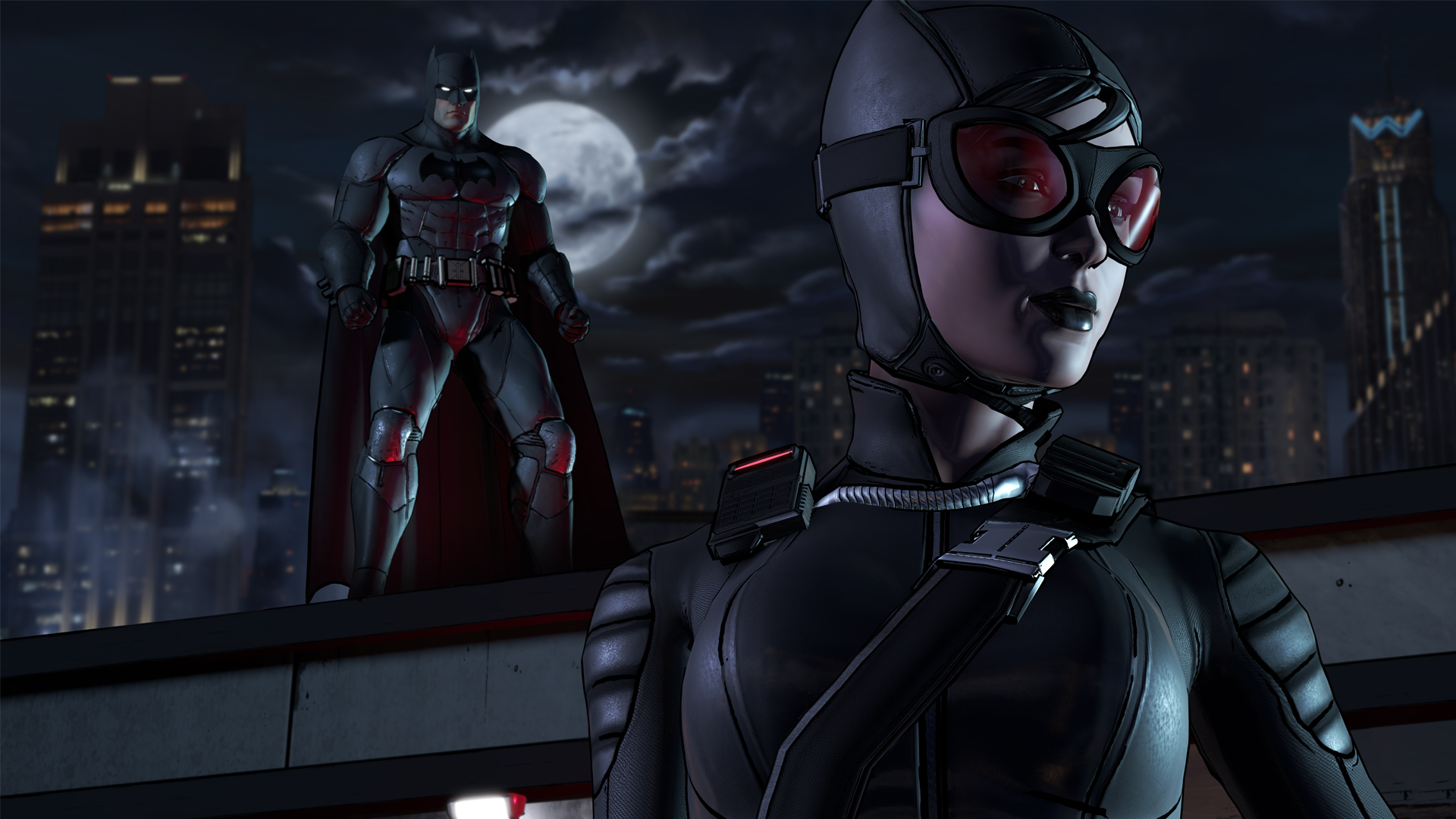 This game takes place at a point in time where the name Batman is known by both criminals and hunted by the police as a vigilante but he is still at the beginning of his time behind the cowl since not only is Gordon still a Lieutenant but one of Batman’s standard gadgets, a smokebomb, is described as still being in a trial phase when used to subdue the thugs. Problem is, the thugs weren’t the only ones after something precious being kept by the mayor as Catwoman, or as the game initially calls her, a cat woman, is after a digital device.

After an altercation between the two and fleeing from the scene from the police with the recovered data drive, the focus shifts from Batman to Bruce as we learn that Harvey Dent is running for the mayor’s office with the help of Bruce Wayne’s endorsement and backing. Unfortunately holding a banquet can draw a lot of attention and not only does the reporter Vicky Vale make an appearance but the crime lord Carmine Falcone also shows up to ruffle some feathers. Even, in this storyline, a childhood friend who has since fallen on hard times Oswald Cobblepot appears. With so many moving pieces pulling at Bruce Wayne and Batman trying to keep ahead of the criminals in the area, Realm of Shadows gets things off to a rather satisfying start. 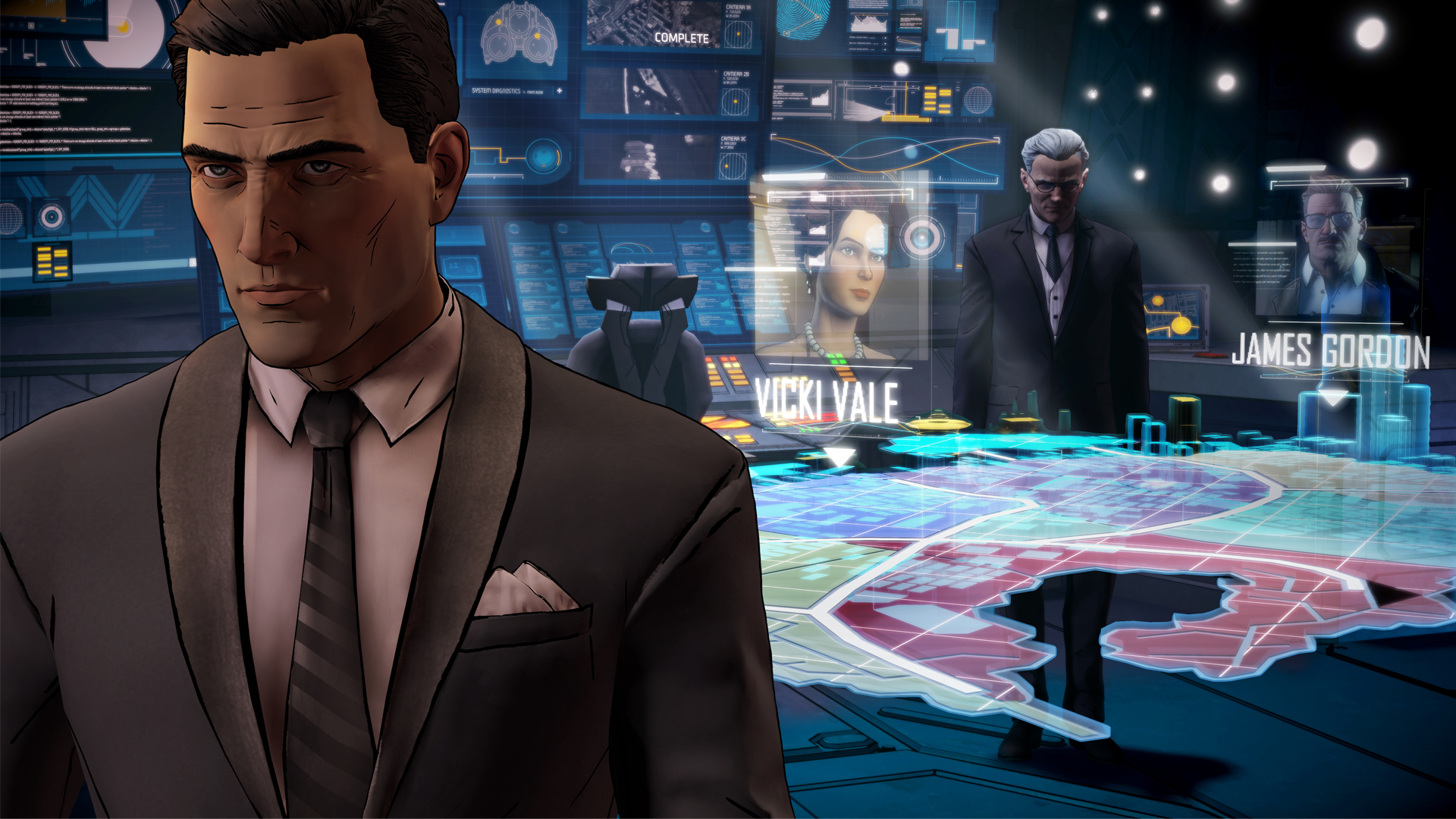 Batman: The Telltale Series does something few other games revolving around the character do by placing a heavy emphasis on the amount of time spent as Bruce compared to Batman. This is demonstrated by a pleasing sequence during the initial conflict with the armed robbers as the scenes shift from the action back to Bruce recovering from his latest outing while talking, and being treated by, Alfred. This is also reflected well in how Bruce feels more at home in his bat cave, where he is in control, than anywhere else as those around him vie for his attention and power.

In fact, outside of the aforementioned action sequence, an investigation sequence, and a closing action sequence, the game spends the rest of the time focusing on Bruce as he tries to maneuver through the politically charged world he finds himself in, especially when the biggest twists come to light and threaten to tarnish the Wayne family name forever. This certain development is one that I certainly haven’t seen coming and it will be incredibly interesting to see how things play out. 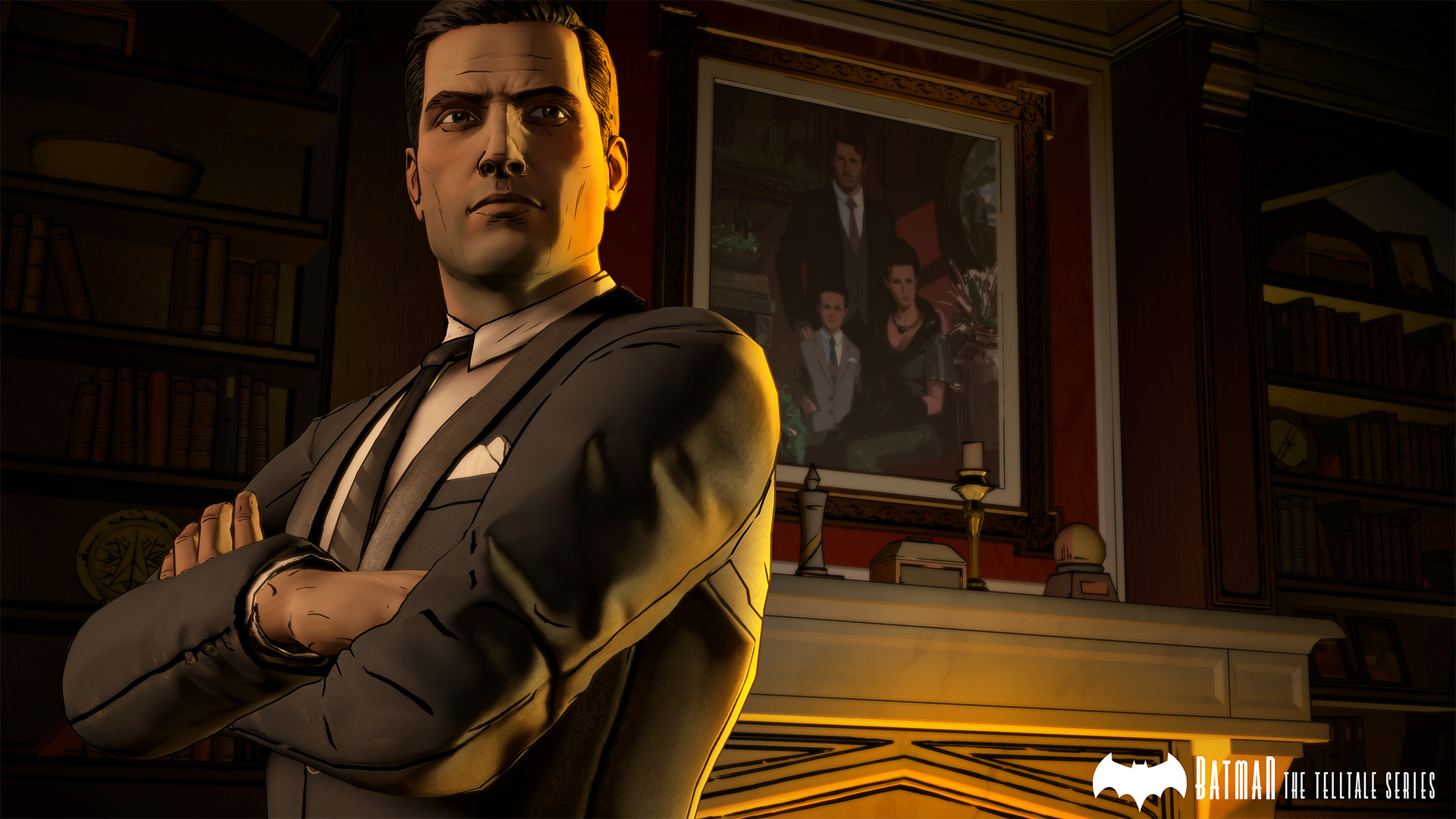 Choices made by the player so far are rather interesting and smaller in scope for the moment as players can either choose to attempt to placate a mob boss, be extremely aggressive as Batman, and even select between who to trust with vital information but for now these various choices don’t seem to play a major role in how things unfold in this first episode. This means that Realm of Shadows serves as something of a building block for everything that is to come and thankfully it manages to pull it off extremely well by introducing a number of characters that will play a major role in the future, be it friend or foe, and an intriguing storyline that fans will want to keep an eye on.

Batman: The Telltale Series features the same style of gameplay that most are used to when it comes to a Telltale game but this time around things are a bit more stylized. Players will still have the standard sequences of quick time event oriented combat, but this time around many of these fight scenes play out with a bat symbol in the bottom corner that fills up when the player puts in the correct input, allowing Batman to perform a finisher of sorts when the fight is completed. To top this off, there is also a very satisfying sequence where Batman can plan out his attack on a heavily guarded area ahead of time, with players selecting how they want to take down each guard ahead of time before initiating the conflict. 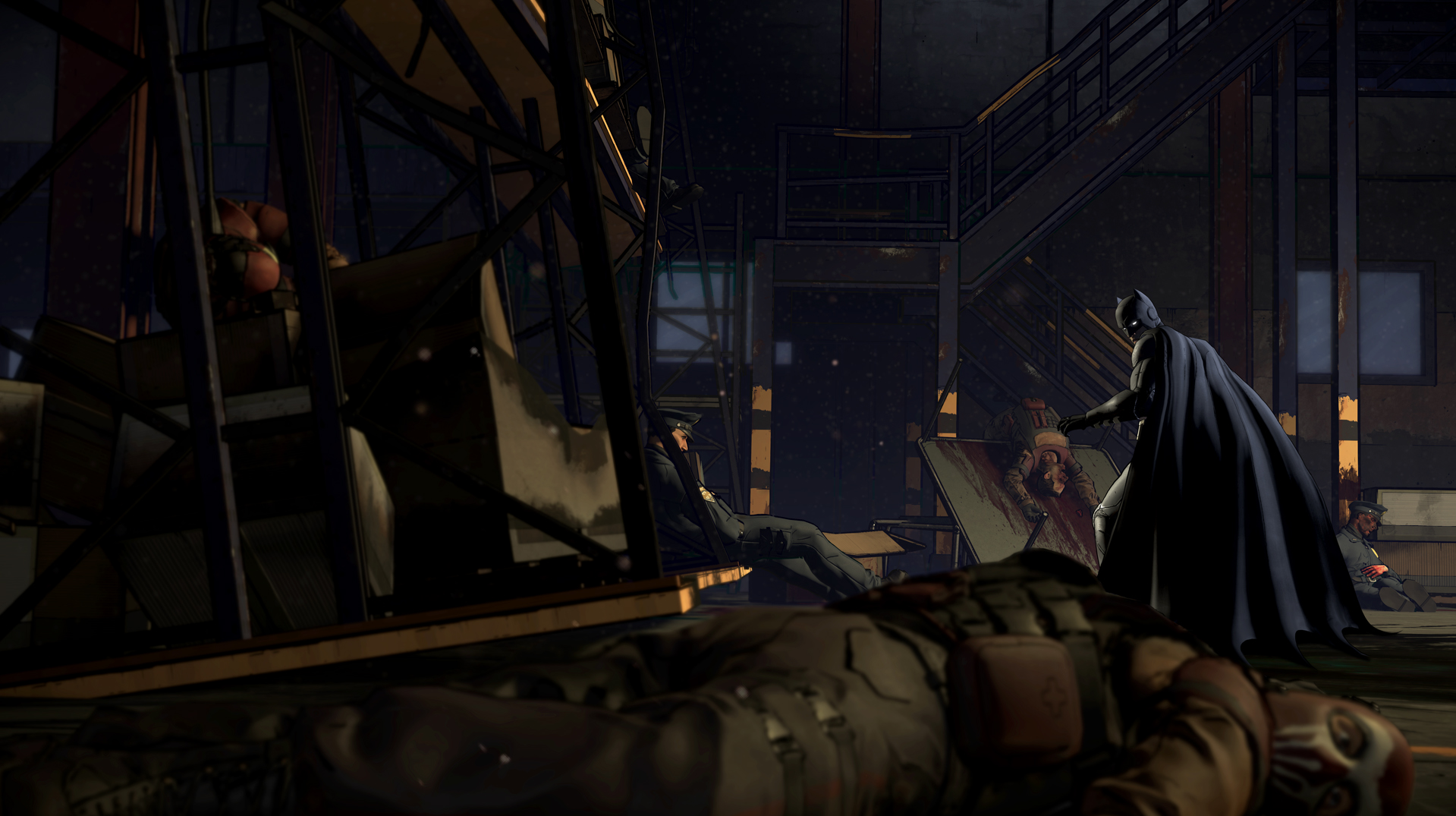 The exploration sequences also seem to have a bit more heft this time around as Batman, at least in this first episode, is able to examine the scene of a crime and can link together various pieces of evidence in order to piece together roughly what happened. This puzzle element is extremely small but it is a nice touch considering many would be hoping for some detective sequences here.

It is worth noting that the crowd play aspect that was advertised for the game is incredibly simplistic in nature and the majority of users will likely not want to bother with this feature. This is because the feature is primarily meant for users to be in the same room as the player to select various choices and vote on whether or not they liked a specific action as the delays on most streaming services make it impossible to actually implement this feature for a wider audience.

The comic book art styling that Telltale often takes with its properties works incredibly well when it comes to Batman: The Telltale Series. Most familiar characters appear similar to how fans would expect outside of a few who have been reimagined such as Cobblepot, though it is hard to not see Bruce Wayne as a less idiotic Archer thanks to the way he is designed in game. It is interesting to note that there is a bit of customization in the game as players can choose from a handful of colors that they want Batman’s various gadgets to display. It is also worth noting that although I didn’t experience the usual slowdown that comes from Telltale games there were numerous moments throughout the series that character animations came across as either incredibly stiff in nature or completely unnatural. 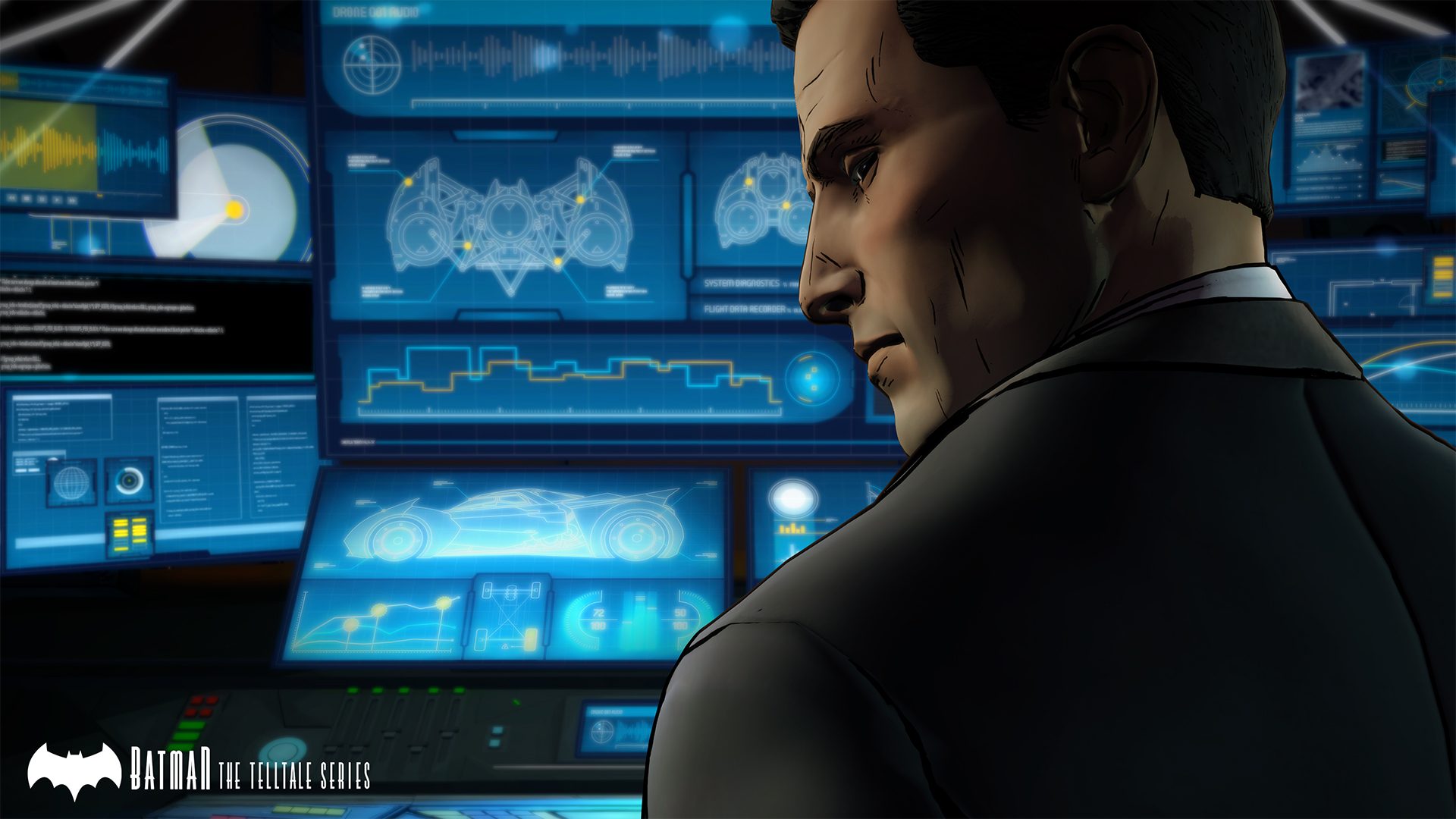 As for the voice work this title sports quite a few familiar names who come to work well with the cast of the game, including Troy Baker as the voice of Batman himself and a few other actors that certainly live up to the reputation of the characters they are portraying. It is worth noting that the game does explain that the batsuit features a voice modulator to lower the sound of Bruce’s voice but I found it to be rather iffy sounding in more than a few situations.

Batman: The Telltale Series kicks things off splendidly with the first episode in this series. While this initial episode doesn’t really give the player much control over how things actually unfold in the episode, it serves as a solid building block to kick off the series with an interesting plotline and a number of familiar characters who can become friends or foes at any time.

Batman: The Telltale Series - Realm of Shadows serves as a strong opener that, despite a few issues, will keep hook fans of Batman, especially those who want to peak behind the cowl at how the man himself actually deals with the pressure from those around him while also trying to protect the city he loves.
8.5