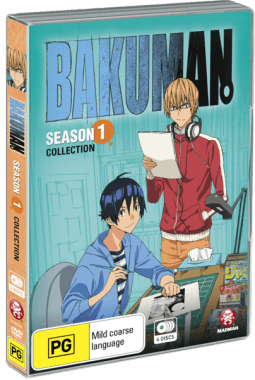 Overview
An anime about making a manga that will go on to become an anime based upon a manga about making manga, that is Bakuman in a nut-shell, but it is so much more than just that. Bakuman is a story about passion, dreams, hopes and love, it just happens to also be about making manga. What we have here is something incredibly unique, but simultaneously niche, the series details the ins an outs of the manga industry with a splash of romantic comedy on the side, if you aren’t all that interested in the behind the scenes workings of the manga world than you’re likely going to have a hard time with Bakuman. It is a pretty even 50/50 split of manga industry exploration and story of following your dreams and loves. However on top of all that Bakuman is 100% fun. 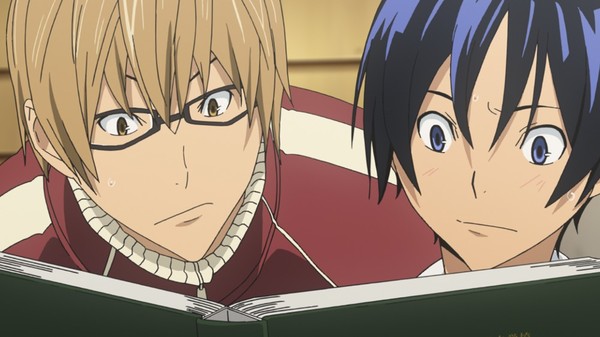 Story
From the creator’s of Death Note, this is hardly the kind of series you’d expect. This is a romantic-comedy slice-of-manga-making-life anime that really is the furthest thing from Death Note. It follows Moritaka Mashiro the nephew of a once famed mangaka who died not long before the events of the series. Moritaka has a knack for drawing and is recruited by fellow student Takagi Akito to make a manga, the pretense being that Takagi would write the story and Moritaka would draw it. Things roll from there.

While the centerpiece of Bakuman is undoubtedly its journey through the manga industry of Moritaka and Takagi, the love story that accompanies it is given its fair share of spotlight as well. Moritaka has always had a crush on classmate Azuki and one discovering her goal of becoming a voice actress, vows that his manga will become an anime and that she will voice the lead in it. To top that off he then essentially proposes to her which she agrees to under the condition that they don’t see one another until their dreams come true.

The love story here is a bit tried and true and not unlike something that these two budding mangaka would have read before. There are times when this aspect of the story feels a little hollow and the love between the two seems to be misplaced. It is hard to believe in this kind of love and because of that it does end up being one of Bakuman’s weaker elements.

Bakuman’s strong suit is its rich exploration of the manga industry and the challenges of being a mangaka. The sleepless nights, the tireless toil that could likely be for naught and the chance that your hopes and dreams could be crushed in an instant. The life of a mangaka is truly rough and it makes for some compelling drama. 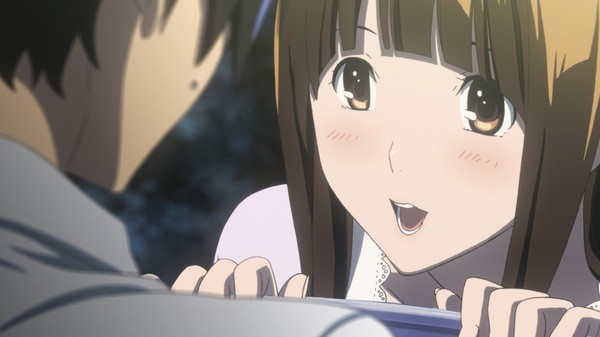 The cast here is quite well defined, in particular our two male leads. There is an interesting bit of characterization that tends to be pounded into audiences here though. That being that women and men are utterly unable to understand one another solely because they are a different gender. I personally found this to be very questionable and the consistent treatment of women as a different creature all together verged on offensive at times. Women are frequently portrayed as nagging, lacking any level of understanding and only valued on whether they are cute or not. It is a hard part of Bakuman to overlook but it is only a minor part of a rather solid character effort.

All in all Bakuman season 1 is quite an interesting look into the world of manga, it details the ins and outs of daily life for a mangaka and the challenges that they must face. The romance elements of Bakuman unfortunately fall flat for the most part due to weak characterization of the female cast. If you are intrigued by the idea of the behind the scenes look at manga making then Bakuman is more than worth your time as there has never been a series that details this topic in such length and realism. 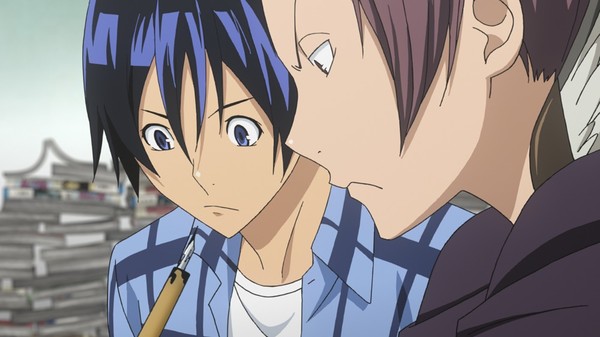 Visuals and Audio
J.C. Staff have done a decent job animated this manga about making manga, bringing it to life in vibrant colour. It isn’t the most consistent animation effort with drops in quality noticeable here and there. However when Bakuman is at its visual best it proves to be some of J.C. Staff’s greatest aesthetic work to date. The character designs are each distinct and memorable. The quality of the animation overall is above average but sadly it does have some down times although they are very minor.

Bakuman’s soundtrack is a great composition through and through with plenty of standout tracks. The music elevates the scenes to great heights and turns what would otherwise be a flat moment into a truly moving one. The theme song ‘Blue Bird’ is also worth noting, it opens every episode on a hopeful uplifting note and perfectly captures the series tone. This release from Madman Entertainment unfortunately doesn’t feature an English dub, so it is Japanese audio only with subtitles and it is very good though in its own right.

Extras
As for special features, Madman Entertainment’s release of Bakuman season 1 is pretty bare-bones. The release doesn’t feature an English dub and instead simply features subtitles only. On top of that there are the usual clean opening and ending themes as well as trailers. It is a simple no-frills kind of release but it collects the entire first season in one release which is a plus. 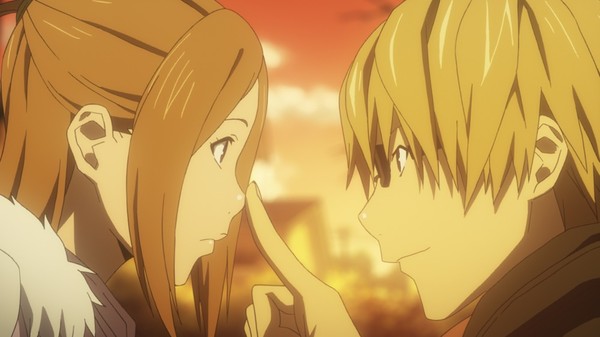 Overall
Bakuman is an anime for manga fans. It homes in a specific audience and gives them all they could ask for and more when it comes to exploring the manga industry. As for a story in and of itself, Bakuman is a passionate journey of identity and dreams. These two young mangaka dream big and in the quest to accomplish those dreams they find themselves. It is a classic tale if there ever was one and Bakuman does a solid job at it. While there is some issues with this series that can be hard to overlook, if you are interested in manga and the industry for it, this will prove to be well worth the watch. Bakuman is a solid anime series, but an even better manga industry exploration.