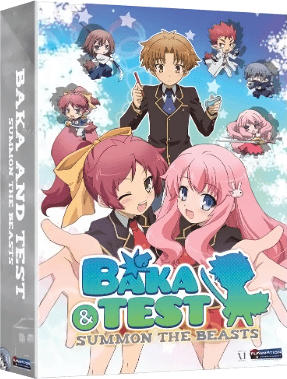 Overview:
Do you think that your school life is boring? Well it most likely is because it can’t be anything compared to what school life is in Baka and Test: Summon the Beasts Season 1. In the world of Baka and Test you are given grades, but these grades mean more than one thing. Does a normal school consist of battles between different classes? How about a school where you’re fighting power equals that of your intellectual power? If that sounds up your alley then prepare for Baka and Test.

Story:
On the outside, Fumizuki Academy may appear to be your average school, but it is anything but average. Fumizuki is a special battle academic school which means that students will be able to battle it out with other students using mini avatars in what is called a Summoner Test War. When the students enter the school they are given a test that will determine what class they will be placed in, anywhere from Rank A being the best students and Rank F being the absolute idiots.

The main protagonist of the story is probationary student and Grade A idiot (baka) Akihisa Yoshii. During this placement test he did so poorly he was placed in Class F. However something else occurred during the placement test, a girl who can be called one of the smartest in the entire school named Mizuki Himeji fell ill and could not complete her test, also placing her in Class F. Akihisa meets up with his fellow friends in Class F, including Class F rep. Yuji Sakamoto, Kōta Tsuchiya who has an extremely perverted nature, the ever feminine looking Hideyoshi Kinoshita, and the violent Minami Shimada. 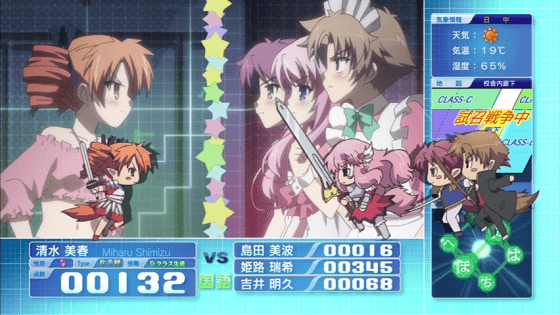 Each class’ classroom is given equipment and learning utensils equal to their rank, meaning Class A has a luxurious mansion type learning area while Class F is forced to sit on empty cushions and wooden tables so old they break at the slightest touch. Because of these horrible learning conditions Akihisa is determined to provide a better quality of learning for Himeji. Because of this he goes along with Yuji’s plan to take on every class in school so that they can swap their equipment out with that of the best class, Class A.

As far as the battling goes, this means that usually the class with the higher rank is going to have a higher attacking power and therefore be nearly impossible for lower classes to defeat. This means that for nearly every single battle Yuji and Akihisa have to come up with some underhanded and brilliant strategies to try and outsmart their more intelligent counterparts.

Now the primary focus of the story is on these inter-classroom battles but that doesn’t mean that the whole focus of the anime is on that. There is also a heavy influence of a romantic comedy at work in Baka and Test Season 1. It is clear early on that Akihisa has some feelings for Himeji, though he never clearly states them besides looking to provide her with a better learning environment. On the other hand Himeji quite obviously shows that she has feelings for Akihisa. Put this together with the fact that her rival in love Minami is much more forceful in her approach the two often end up pulling Akihisa in two separate directions, both wanting him to spend time with them. 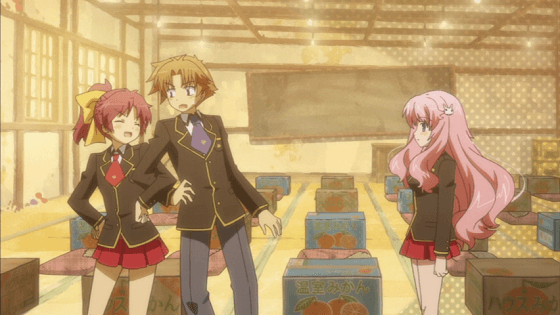 One part that I disliked about this element of the show however is that, despite their extremely obvious feelings for Akihisa, he is completely oblivious to the fact that these two girls are in love with him. This makes Akihisa not only the biggest idiot in the history of anime but also one of the densest.
Besides my dislike for the stupendous stupidity that Akihisa possesses towards both Minami and Himeji the series certainly has a lot going for it in storyline. Beyond that there is plenty of laughter to be had as the classes battle it out with one another and the students of Class F are put into compromising positions, namely involving either Akihisa or Hideyoshi.

Artwork:
The animation quality for Baka and Test is very well done. The backgrounds are very well drawn, especially when you compare the luxuriousness of Class A’s room compared to the condemned feeling of Class F. The color palette that they used for everything in the show is nice to look at, though some characters have very unique hair such as Himeji’s bright pink hair.

The character designs themselves can be warranted as a bit generic as they pretty much fall into your average anime designs. The school uniforms that the characters usually wear is nothing impressive, though their occasional appearances in casual clothing help alleviate this problem slightly. 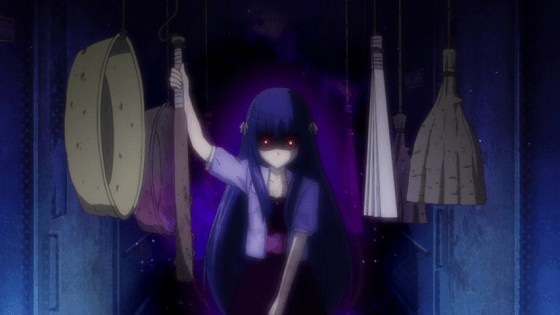 The battles using the character’s avatars are rather simple in appearance. This is because for 90% of the battles that are shown the avatars are smaller, chibi like versions of their summoner though occasionally the action does flex its muscles by showing a heightened combat scene. I must make a note as well that the animation occasionally switches itself up completely, appearing as a very serious looking anime at times; although in the end it is for a comedic purpose and the extra seriousness only adds to the hilarity of the event about to occur.

Audio:
The background music that is presented during the show itself can be rather easy to forget at times and is your average slice of life school music except for when an avatar battle is happening. On the other hand the Opening song “Perfect-Area Complete!” is very enjoyable and cheerful sounding. The animation for the opening is also matched perfectly to the music which made me perfectly happy to watch the opening each time it was shown.

Baka and Test Season 1 has two separate ending songs which change up in the middle of the series. The first song is called “Baka Go Home” which is a more rock based song that is matched up to the male characters of the song while the second half of the series is given the ending “Hare Tokidoki Egao” which is a more pop like song that focuses on the female members of the cast, plus Hideyoshi. These ending animations are rather plain but still mesh together well with the music. 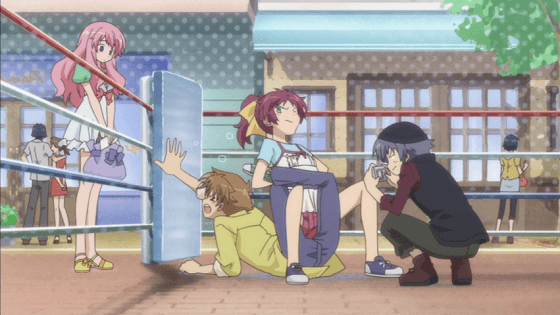 This release from FUNimation comes with both the English and the Japanese voice track which means you can choose which version you prefer to listen to. I would have to say that the English voice cast for the series did a well enough job representing each of the characters in the series. Akihisa and Himeji are voiced very well and Akihisa’s pain is very well sold by his voice actor, which is a necessity considering how often he is the recipient of a beating or two.

Characters:
Akihisa Yoshii is the main idiot of Class F and is the central focus of the anime. He is a probationary student which means that his avatar is special. This is joked about often as the only thing special about his avatar is the fact that it can interact with objects in the real world and any damage done to it makes Akihisa get hurt as well. He is very dense and, as I said earlier, I found myself growing a bit tired of his complete disregard to Himeji and Minami’s feelings.

Mizuki Himeji can be seen as either the main heroine of the series or rather the co-heroine. She is extremely intelligent but can be very shy at times. Her placement in Class F was due originally to her poor health though she found herself happy in the low ranked class thanks to Yoshii being in the same class with her. She has strong feelings for Yoshii and often displays this by going out of her way to be with him or becoming extremely angry whenever he is involved with another girl, so angry she borders on yandere.

Speaking of another girl we have the other co-heroine of the series, Minami Shimada. Minami was raised overseas for most of her life and because of this she placed low enough on her tests to be ranked in Class F. Minami harbors feelings for Yoshii as well, though she is very sensitive about her small chest and is also the tsundere character of the cast. This means that even if Yoshii compliments her appearance, she will still react violently towards him thinking he is mocking her.

Those being the only two female characters of Class F we also have Yuji Sakamoto, Kōta Tsuchiya and Hideyoshi Kinoshita. Yuji is the class leader who used to be a child genius and comes up with most of the strategies used by Class F. He is also constantly in fear of his life from Class A representative Shōko who persists to marry him and is extremely violent. Kōta is the resident pervert of the group. He carries a camera around with him constantly and consistently tries to see up girls’ skirts and take pictures. This is counterproductive to his nature however as he quickly suffers from nosebleeds that jokingly kill him from time to time.

Finally we have Hideyoshi Kinoshita. Hideyoshi is best seen as the trap character of the series, though this isn’t of his own choosing. Hideyoshi clearly represents himself as a male however he is constantly forced into crossdressing situations and treated like a beautiful girl, much to the delight of Kōta and Yoshii who both suffer nosebleeds whenever something fan service related happens with him.

Extras:
Those who pick up Baka and Test Season 1 will be happy to hear that the series comes with a multitude of special extra content. This includes your standard clean opening and the two endings cleaned of credits, but it also includes a number of extra skits. This includes a hilarious cooking special with Himeji which shows us exactly how she makes her food so deadly. 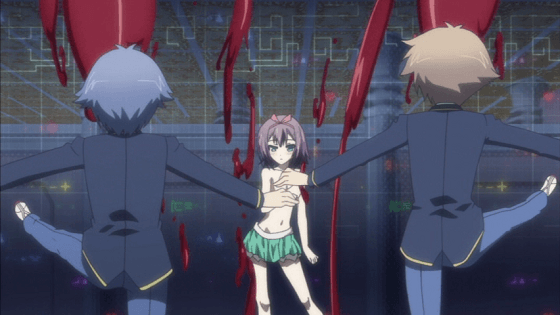 While the extras are enjoyable and will help extend fans enjoyment of the series, these extras are not English dubbed so anyone eager to watch these should prepare to read the subtitles provided to understand what is going on in each extra.

Overall:
Baka and Test may appear to be your simple high school slice of life anime from its description, but it is clearly far from that. With the constant avatar battles there is usually some form of action, though there is a heavy focus on comedy and romance at the same time. Despite the many themes that the series focuses on, nothing feels thinned out to make room for the rest. This means that fans of any of those genres should appreciate the series. With a storyline that is unique and characters that are both stupid and hilarious at the same time, Baka and Test should pass with flying colors in most viewers’ report cards. Which of course means a stronger avatar next battle!

I give Baka and Test Season 1