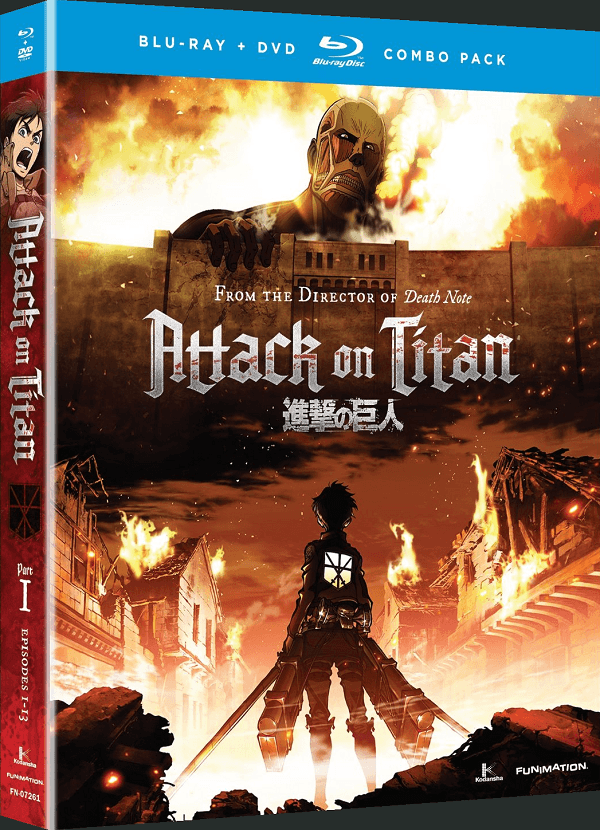 Overview
Despite there being over a hundred anime series created each year, rarely will more than one or two of these series reach such a wide-ranging audience as Attack on Titan has managed to. Not only has the series spawned numerous manga spin-offs in Japan as well as a slew of merchandise, it has propelled the original manga to chart as a best seller in North America for over a year. To top that off, Attack on Titan is even being broadcast on television through Toonami. The question is, does the first part of Attack on Titan warrant a purchase or is all the hype for nothing?

Story
In the world of Attack on Titan, humanity has taken refuge behind gigantic walls that have protected them for over a hundred years. In fact, except for the Scout Squad, very few people venture beyond the safety of the walls because they serve as protection from creatures called Titans that eat humans and ignore every other type of animal. As such, a young Eren Jaeger is discontent with his life stuck behind the walls even though he lives a simple life with his adopted sister Mikasa, his mother, mysterious father, and his best friend Armin. 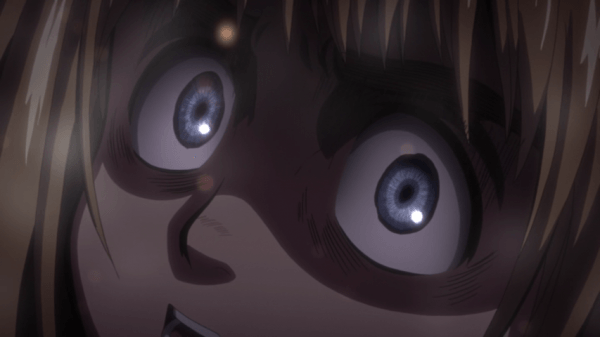 That simple life is shattered when a skinless titan, later called the Colossal Titan, suddenly appears. This titan is taller than the walls and looks over at the humans who have for so long remained safe and ignorant of the outside world, only to smash through the wall and let in the very Titans that these people will soon fear. As the Titans swarm into the area the ill-prepared military proves useless against these giant freakishly human looking monstrosities who begin to devour everyone in sight.

With the city in a panic, Erin’s house is destroyed and while Erin and Mikasa try to save his mother, she must be left behind when a Titan approaches the household. With Erin and Mikasa both being carried away to safety, they are forced to watch as Erin’s mother is devoured. Even when the stragglers of humanity escape behind the next set of walls, the nightmare is not over as the refugees find themselves without food and sent on a suicide mission simply to cull the population. 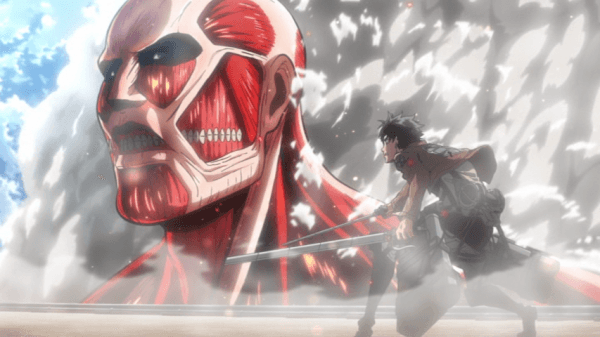 As such, with Eren, Mikasa, and Armin all now orphaned, Erin, seething with feelings of hatred and revenge, enlists in the military to train and become a soldier capable of taking down these Titans. Unfortunately for him, even with Armin and Mikasa at his side, these foes are not only incredibly resilient and numerous, but even the best humanity has to offer can do little to stop the next attack from the Titans from occurring.

There are many elements that create an enjoyable show and Attack on Titan has many of these elements which may explain why it has become such a popular series. First and foremost the entire setting is rife with mysteries, such as where the Titans came from, why do they act as they do, what happened to the world in the first place, and many more. In fact there are so many questions that even when we see some semblance of an answer, numerous other mysteries are brought to the forefront and create an intriguing and bleak world that these characters must survive in. 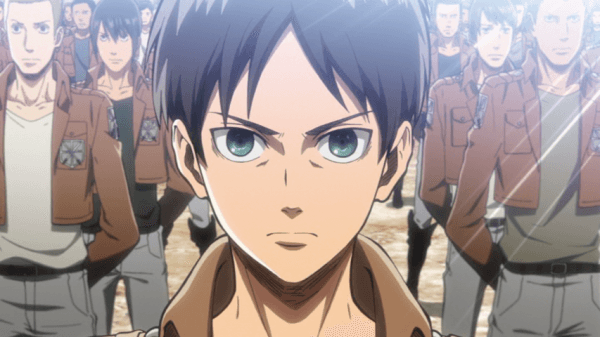 That is another case for Attack on Titan, while humanity can fight back against the Titans through the use of 3D Maneuver Gear that allows them to zip through the air and attack a Titans weak point with incredibly sharp blades, no one is safe from becoming Titan chow. These incredibly durable monstrosities make for a world where death is a constant and survival is pretty much never guaranteed.

With this thought always in the back of their minds, it creates an interesting cast of characters that are explored throughout each episode, though most of the focus goes to Eren and Mikasa’s backstory to explain why the two ended up together. Even then, each member of the cast is memorable in their own way, be it a certain hungry girl named Sasha or Jean as he deals with leading his fellow soldiers into danger. To add to the desperate theme of the series, there are many times that even background characters will momentarily be focused on just to show how pitiful their chances are or how desperate they have become facing such monstrosities. 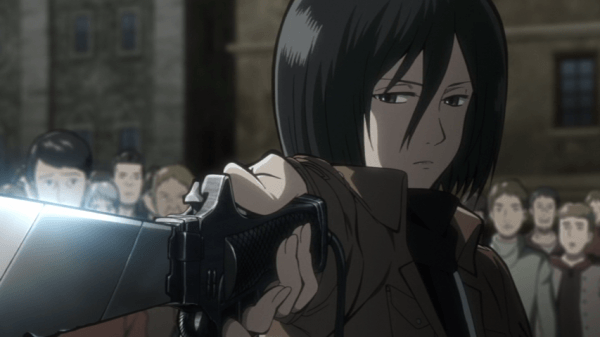 That being said, while Attack on Titan thrives on fast paced action, a likable cast of characters pit against unthinkable odds, the fact that death is around every corner, and one major twist, there are some issues with the way the story is paced. Because of the way the story is told, we are often pulled away from the action to either introduce a new character/threat, or cover a bit of backstory which is problematic when you consider how the second half of this release is all about an intense battle between humanity and Titans.

Visuals
Like many people, I watched Attack on Titan back when it was being shown through Crunchyroll and at the time, there were some notable issues with certain aspects of the series. There were many moments that one scene would not change or have any movement at all for over ten seconds and while this usually was for dramatic effect, it looked terrible. Thankfully that aspect of the series has been changed for home release as watching through the series at this point I noticed a number of sequences that have been expanded slightly to avoid this issue. 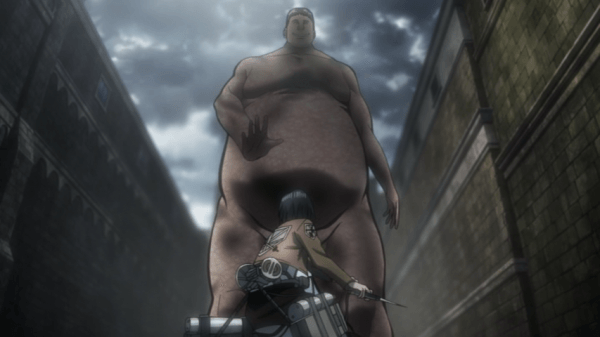 The design of the city and all of the backgrounds in Attack on Titan is gorgeous looking though with the way the characters are designed there is often a stark contrast between a character and their environment. That being said, the characters are nicely designed with notable characteristics and there is plenty of blood to be had as one would suspect. The titans themselves range from looking terrifying to absolutely ridiculous looking, often in a bad way, such as a certain running Titan looking completely out of place in a series such as this.

Audio
While many fans of the series might be on the fence about trying out Attack on Titan’s new English dub, the voice cast that has been assembled to tackle these characters has done a great job portraying these characters as they deal with all of the drama in the series. Of course for those who would prefer it, the Japanese voice track is also available on the release. 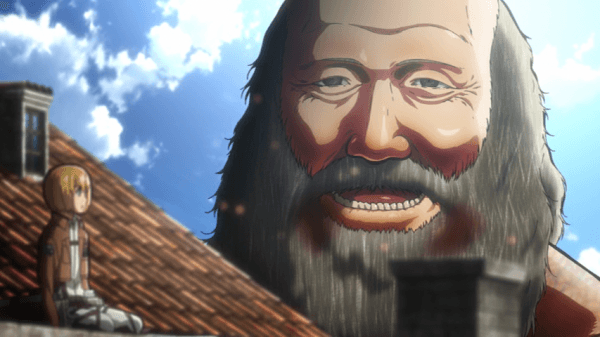 Most anime have basic background music that is forgettable but Attack on Titan is not like most anime. In fact the majority of the background music is presented absolutely amazing sounding with a chorus capable of making any moment feel foreboding or action packed. It is also worth noting that the opening theme for the series, “Feuerroter Pfeil und Bogen” by Linked Horizon provides an epic sounding introduction to the show while the ending theme “Utsukushiki Zankoku na Sekai” by Yōko Hikasa serves as an emotional closer.

Extras
It is worth noting that for this review of Attack on Titan Part 1 we can only mention the on-disc extras and FUNimation has provided a number of bonus features alongside their rather standard offerings. There is a clean version of the opening and ending themes, trailers for the show and other FUNimation anime, an “Eyecatch Gallery” that features the translated text of all of the information shown on the mid-episode eyecatches, a making of documentary, Chibi Theater: Fly Cadets Fly! which is a set of chibi shorts that are presented in Japanese only and can only be viewed on the Blu-ray discs of the set, and two commentary tracks. 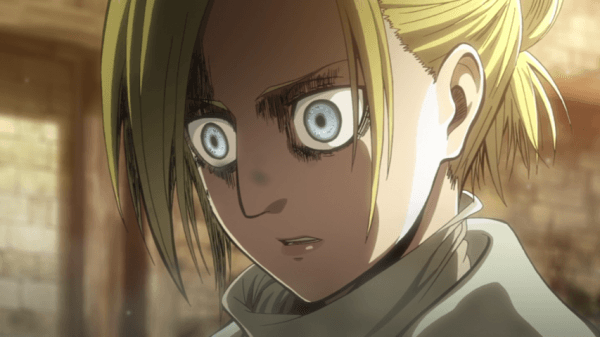 Overall
Attack on Titan Part 1 thrives on the series’ interesting premise of humanity struggling against foes that see them as nothing more than food and the concept is helped along by intense action sequences and plenty of drama that helps viewers connect with the wide-ranging cast of characters. There are a few issues here and there with the pacing in this first half but with three new questions for every answer, significant twists, and death around every corner, it is clear that Attack on Titan is a series that deserves the many fans that it has attracted over the past year.