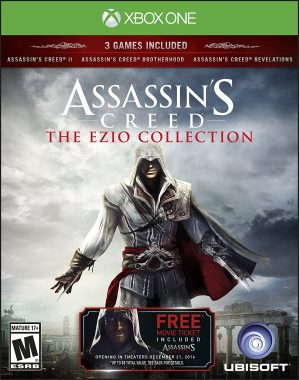 Assassin’s Creed has certainly left its mark on the industry during the past decade – seeing a new game release on a yearly basis. As with every title that sold in great numbers, Ubisoft have decided to lift the lid on yet another port for present platforms with Assassin’s Creed: The Ezio Collection. Now, this is not the first time we have seen Ezio receive a re-release, but this version comes with “enhanced” visuals, as well as the lack of features that were no longer relevant such as multiplayer. How does this trio of titles perform? Let’s find out. 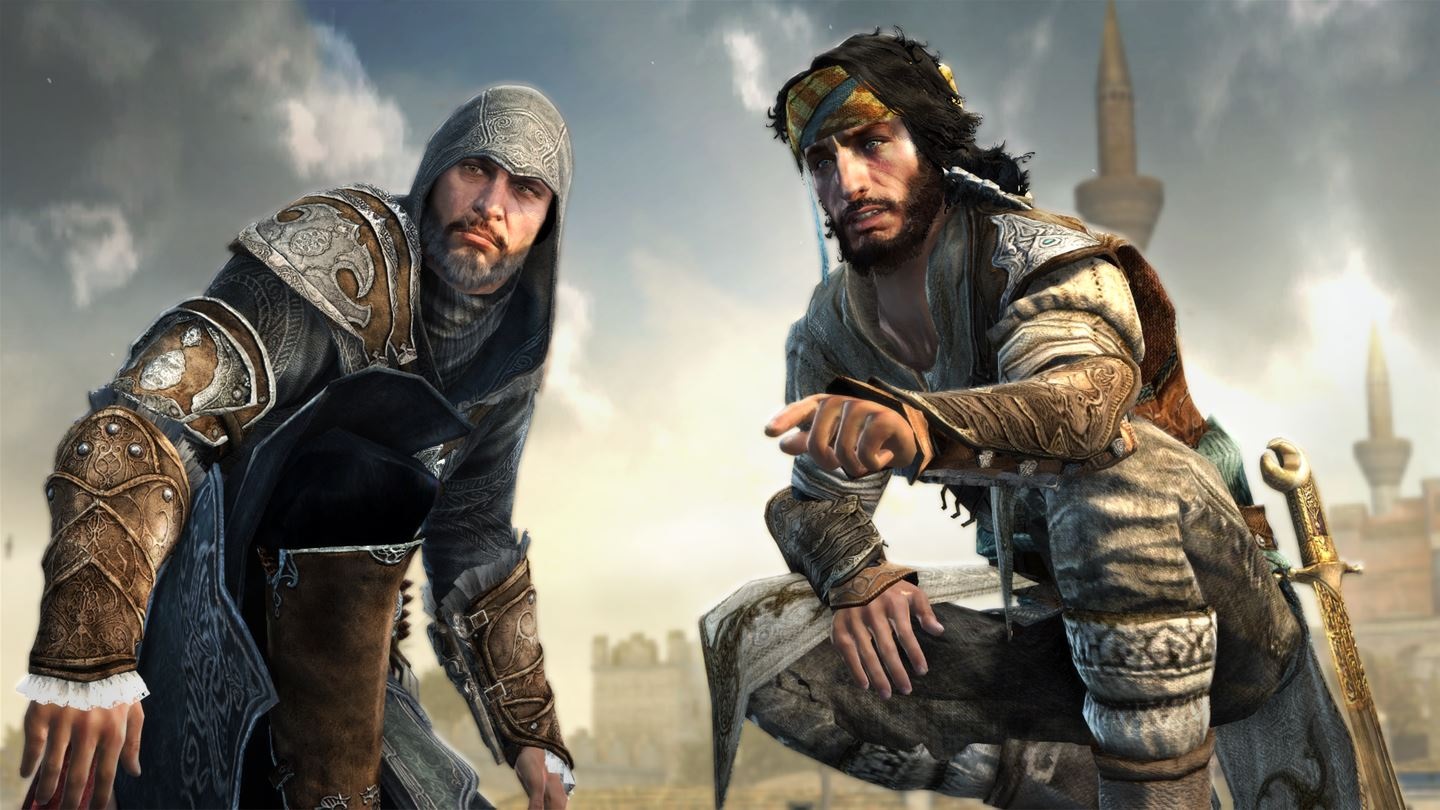 It’s hard to delve deep into Assassin’s Creed’s story as even with just this collection, the three tales actually are quite convoluted. Luckily, The Ezio Collection features Ezio, who is by far the most charming and fascinating hero that the series has yet to recreate. From his humble start in Assassin’s Creed II to the much more riveting plots of Brotherhood and Revelations, it was awesome to get to revisit where I left with Assassin’s Creed on a positive note. I am not bashing the latter titles that came after Revelations (even though some are definitely duds), but the writing, voice acting, and overall production value for this trilogy simply shines – and despite some muddy areas with side plots, make this an excellent entry to a new fan to cut their teeth on before the big screen adaptation hits theaters. 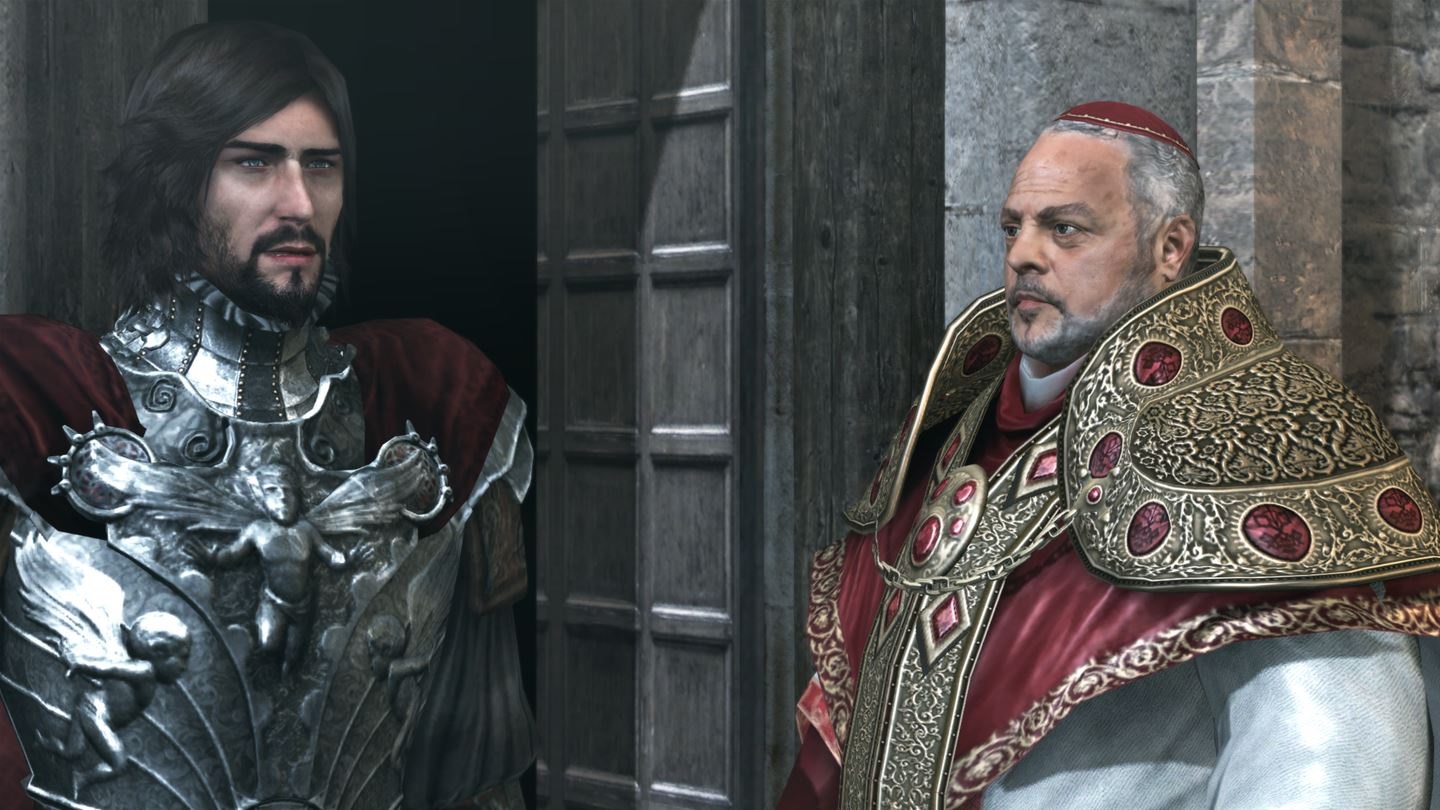 For gameplay, we should of course start with Assassin’s Creed II. This title came right after the original and redefined the same mechanics to make the experience far more fluid and entertaining. Assassin’s Creed II is far from perfect though, as it now shows it age more than any other title in the trilogy, with the combat mechanics feeling dated and clunky, which have now been replaced with far more refined inputs that have made the games more accessible. That isn’t to say there isn’t fun to be had, as the second entry still has a greater sense of freedom for the player, as the game is less tied to the plot and has more of a sandbox feel overall due to lack of intense focus on Ezio as a character. He’s just an assassin here who takes contracts and kills. Sure, there is story – but Ezio never really got a lot of development until Brotherhood. 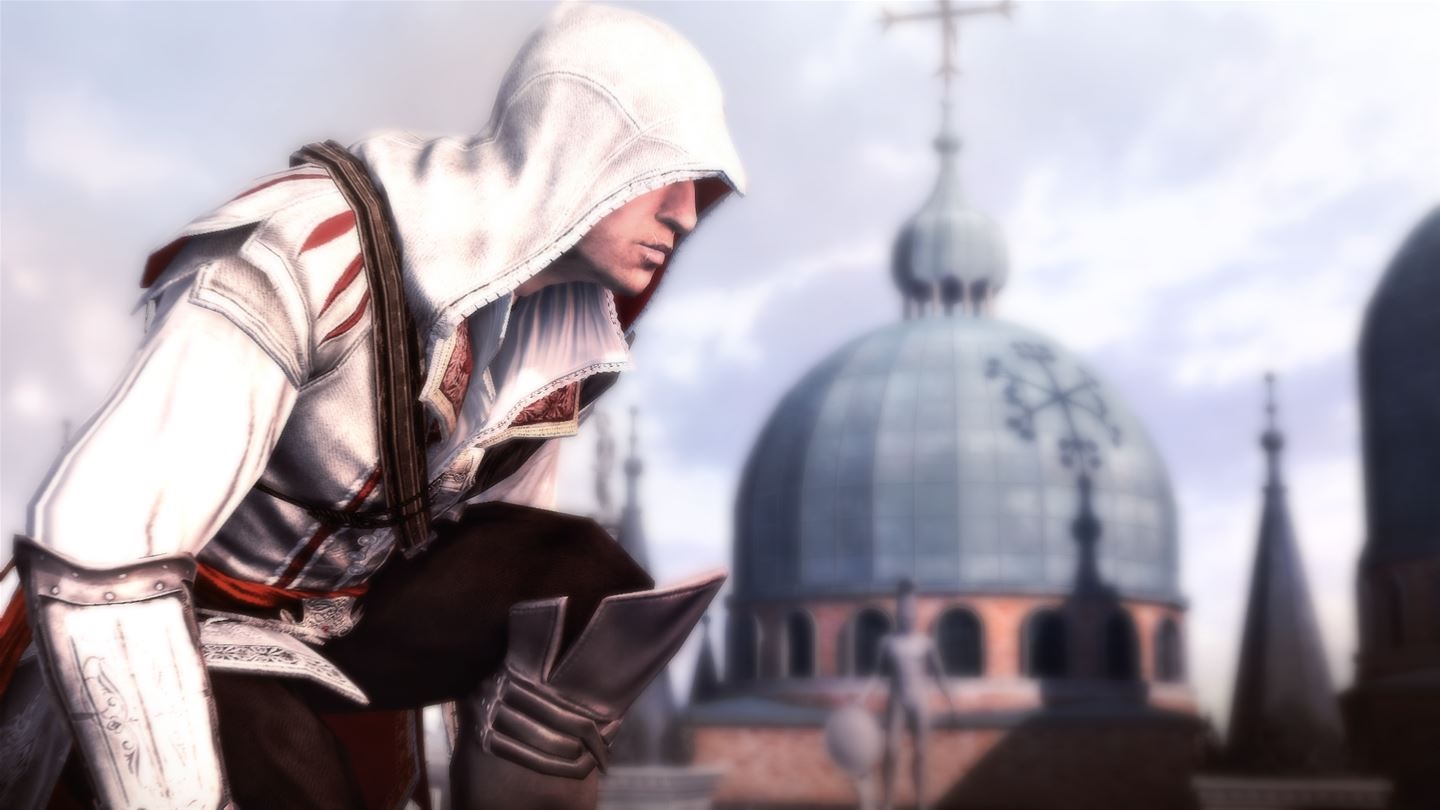 Speaking of Brotherhood, I have always had a major soft spot for the title that introduced me to one of my favorite multiplayer experiences of last generation. Sadly, that is not a part of this package – but the main game still has a lot more tricks and refined combat that its predecessor, with the ability to task other assassins to do the dirty work for you as you progress in Rome. Desmond’s segments however are more tedious than I remember and have reminded me why I used to have such angst to get back into Ezio’s attire due to the great amount of boredom that these areas inhabit. 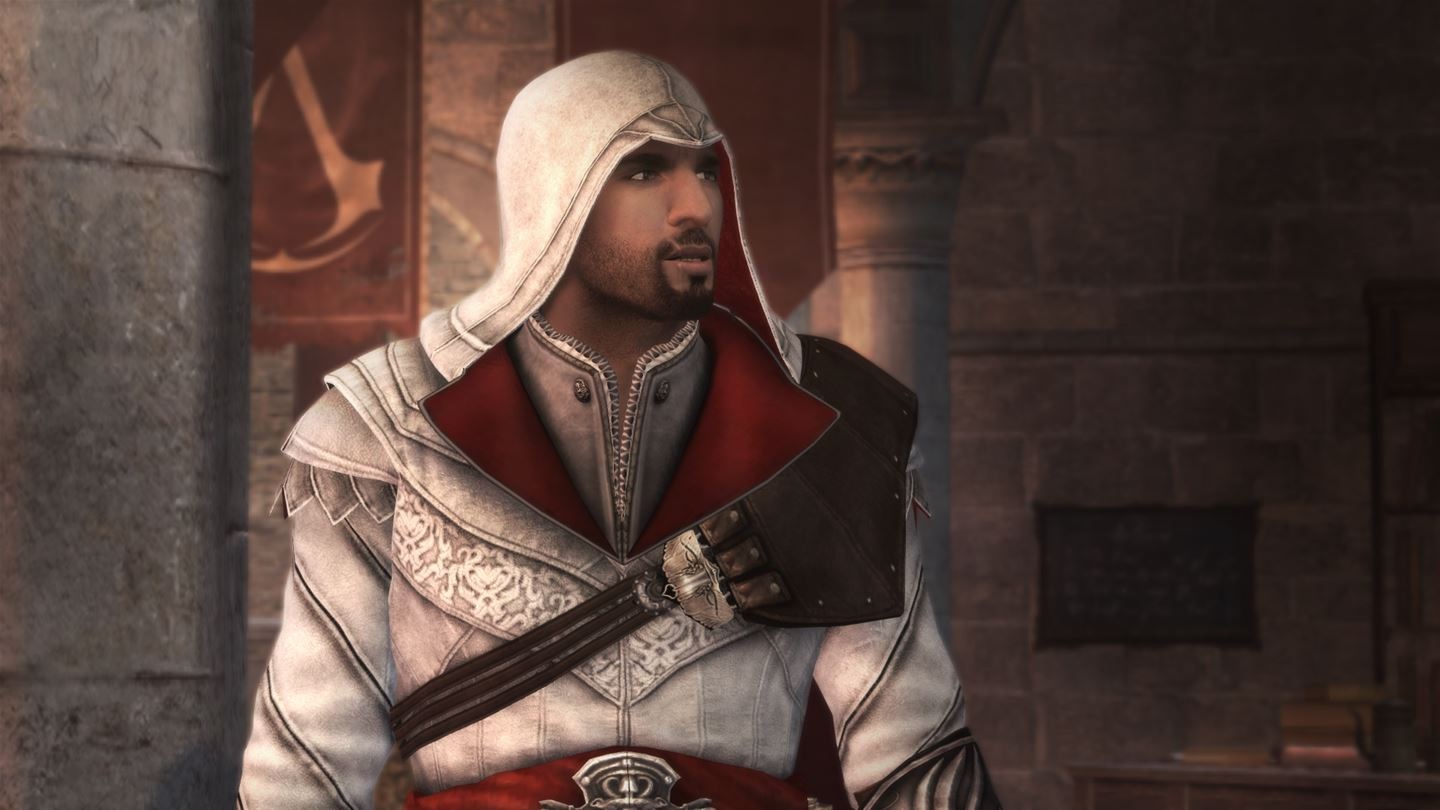 Revelations is certainly the most ideal of the entire lot when it comes to gameplay. The hookblade makes travel quick, while the den defense provides a refreshing little tower defense experience to break the standard monotony of the game. It is a solid title that doesn’t feel a bit different from the time I had with it years ago, and that in itself is just fine. Players who snag up this collection will also receive some little short films to expand the universe slightly, as well as all of the single player DLC – which to be honest is not a ton, but it does make the package a bit more valuable overall.

I guess this is where we go over all of the changes with all three titles in the collection, but there isn’t a ton to really speak of. A smooth coat of polish has been applied to the character models themselves – allowing for more fluid animations in a 1080p world. Now, I did have some visual hiccups on these models from time to time that I did not remember in the original versions, but these little hiccups mainly just hurt the faces of characters (only noticeable in Assassin’s Creed II) and not the actual gameplay.

The other thing to note is that a lot of the art in the games that once looked scrambled is more vivid and detailed. Sure, you will not notice it right away, but the improvement is there and definitely pushes the last two titles into the next gen, even though the push is slight. Lighting and other environmental changes have also occurred, but again – these adjustments are minor and may be a bit hard to pick up without a side by side perspective. 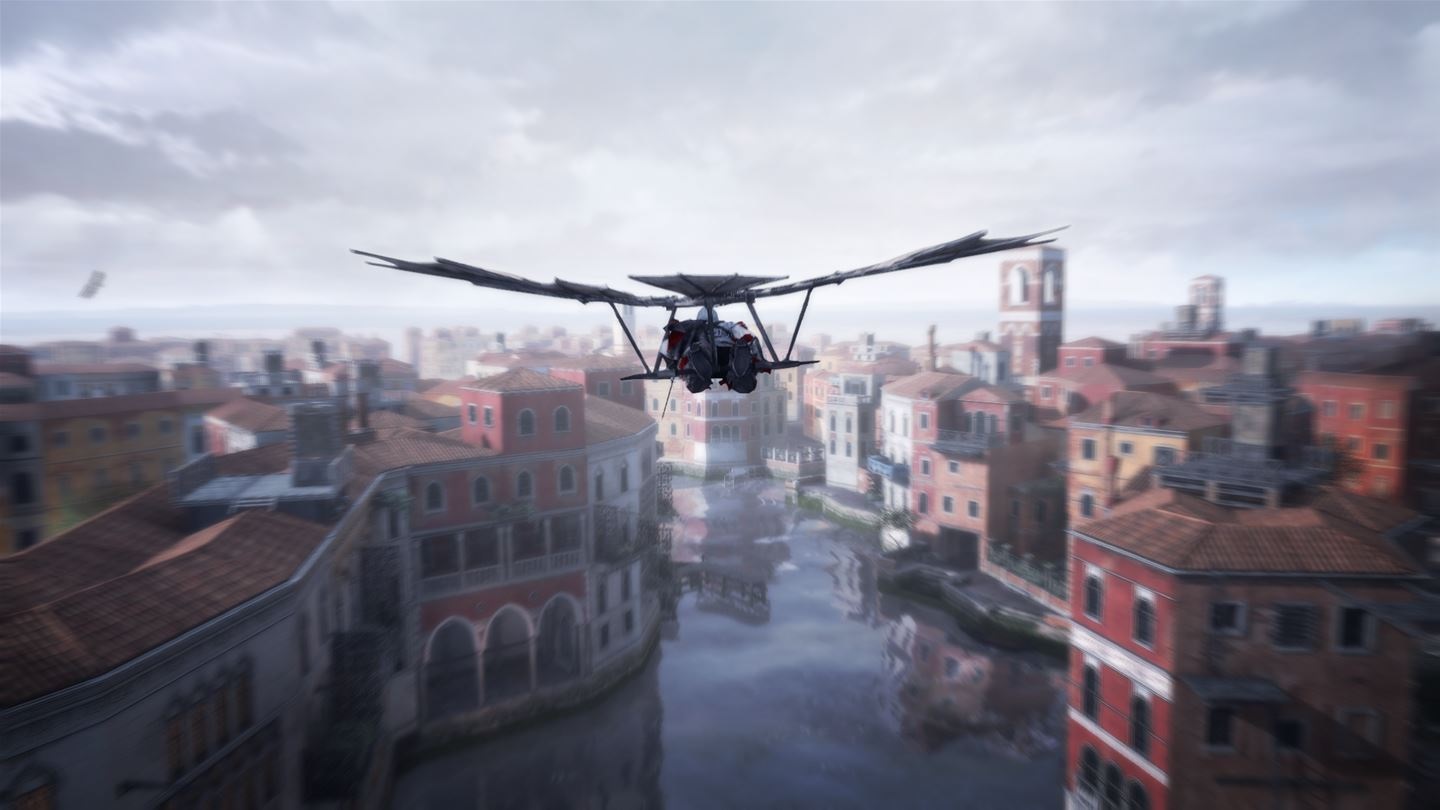 Audio wise, these three titles seem to be exactly as they were. The voice acting is still very well done and the soundtrack is also fitting and atmospheric for our hero. As good as the voice acting is, the animations do miss a beat from time to time, but I kind of chalk that up to the age of all three titles, as well as the fact that it probably wouldn’t be valuable to re-animate for titles that are now over five years old. Should Ubisoft have ironed this out? Yes, this game is full retail release and if there is no excuse the first time around for modern titles, a sixty dollar trio should certainly pull up its pants and try to put on the best show possible.

Assassin’s Creed: The Ezio Collection is what it is. What we have here is Ubisoft re-releasing the best of the franchise right before a holiday, on the same year that they take a break from sticking another new title on shelves. While the latter part of that is noble and shows growth, we don’t need to continually see games from last generation shined up and hit newer platforms when the availability for older platforms is still there. That said, there is a bit of fan service tied in and die-hards will want to have this collection sitting on their shelves for years to come – so to those, I say the world is yours with this package…again.