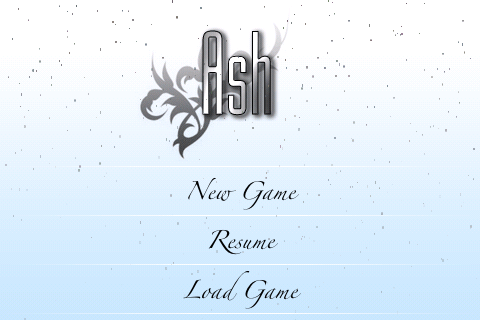 Story:
Ash throws players into the story of two ex-imperial officers Damien and Nicholas. They used to be members of the Imperial force until they saw an entire village destroyed by the advanced guard. Going into hiding is their only way to survive, and they do this by becoming mercenaries. In the Empire of Aghaus, the land is simply in chaos after the death of their king five years ago. But little do they know that their mercenary life style is going to place them dead in the center of the conflict.

While this storyline is a bit unique considering many RPGs don’t bother with as much set up as Ash does. Players will feel themselves genuinely interested in what they are experiencing and eager to learn more. The storyline never becomes stagnant. This is further assisted by the way that the story is told.

Now Ash follows your standard RPG text bubbles for text, but that is where it also takes a step outside of the box. Much of the content that players will be reading never becomes dull, there are humorous jokes thrown in, throwbacks to old games, and even the odd pun thrown in here and there. The characters never feel played out and generic as their personalities are developed over time, giving players the feeling that they should keep driving forward to find out what would happen next. Ash’s story is just like what a good book should be, interesting without too much stagnation which leads the reader to keep pushing forward even though it is long past time to take a break. 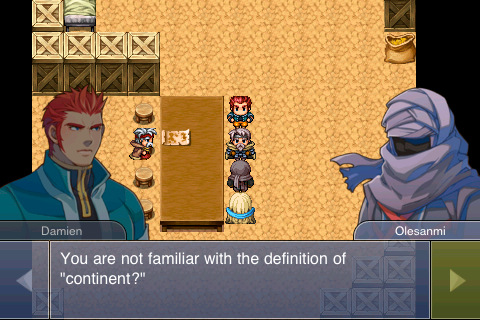 Graphics:
Before I go into the graphics department, there is one thing to take note of. Ash is mimicking the 16-bit RPG style that we used to play yesteryear. Now that that is out of the way, let me just say that it does that perfectly. Everything from our memories is there, from the small character icons that we navigate around the world, to the basic but intriguing environments that are created through the limited resources available.

The worlds that you explore are very intricate with plenty of little items that can be looked through and examine. Now with the game’s already humorous dialogue examining various bits and pieces around a house or a town is always good for a quick laugh. Another nice feature that more RPGs should factor in, is that players need to know when they have talked to someone already.

One thing I noticed was that as the player goes through a town they will talk to the different people the text bubbles above their head will change color, signifying the fact that you have already heard everything that NPC has to say, or are yellow if it is important.

Another nice graphical enhancement is the fact that the game’s battles are treated as a first person experience. Players will be treated to an Earthbound-esque type battle screen with enemies facing them and being unable to see their own players besides the battle menu. The enemy sprites are well illustrated and look great; there is also a decent amount of variety among the enemies that keeps things interesting as far as the battles go. 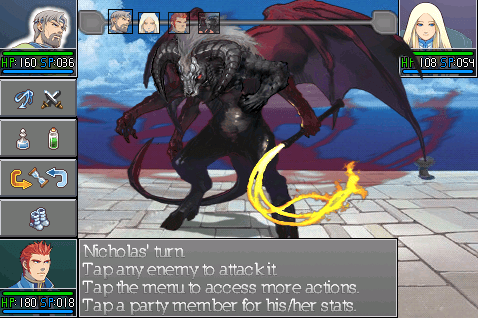 Gameplay:
Now Ash is your standard old school RPG. There isn’t too much to the gameplay elements beyond adventuring around and doing battle with the enemies you will encounter. Don’t let that discourage you however as it is far from lacking in this department.

As I said before the way combat is handled in first person, but the way that it is executed is the interesting part. Rather than having to navigate a bunch of different menus to simply attack, or touch attack and touch the enemy you want to hit, and then touch accept, in Ash you do not have to deal with any of that. A simple attack is done by tapping the enemy you wish to hit, simple as that. Of course more in-depth moves such as using skills or items do require the use of the menu system but the streamlining of basic fighting is enjoyable.

After a battle ends rather than getting individual experience the player will receive something known as Part EXP. This Party EXP is exactly what it sounds like, experience for the entire party which means that the Party levels as one, it doesn’t matter on whether or not if the combatant was alive at the end of the fight, or if they even took part in it. This also means that new warriors are automatically the same level as your characters. Which means your EXP grinding efforts won’t go to waste simply because you have a low leveled character joining your group later on in the game.

Despite the fact that battles are very enjoyable and well-handled getting from place to place is difficult. This is mostly because of the fact that the game does not have a virtual D-Pad, instead it uses the players finger taps to go in that direction pressed. Touch the top of the screen to go up, the left of the screen to go left etc. This is very awkward and in the end troublesome when exploring a dungeon or even when searching around a room which requires double taps to examine something. It is hardly game breaking but does take some getting used to in the early goings.

Another problem is that not only is there no actual map of the over-world that you can explore. The world itself is quite large but that also means that wandering into an area that you shouldn’t have been yet simply because you were lost will result in instant death battles. There is a map available at the game’s website, but it is unfortunate that it isn’t available on the iPhone where players can access it easily within the game. 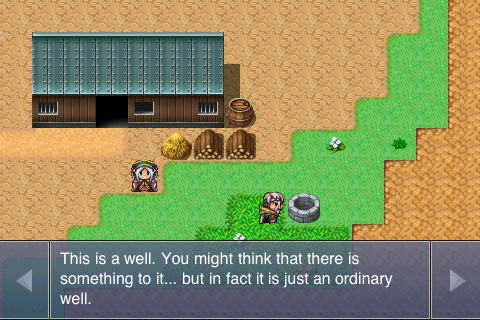 Overall:
Ash definitely makes it’s mark in the world of RPGs available on the iPhone/iTouch today. It brings with it a bit of an entrancing storyline that makes it hard to stop playing, humorous moments, and streamlined old school turn based battles. Even random encounters make a return. There is a patch coming that will provide a D-Pad for easier navigation but at the current moment there is none which is a detriment, but expect this to be fixed in the near future.

I give Ash for the iPhone/iTouch