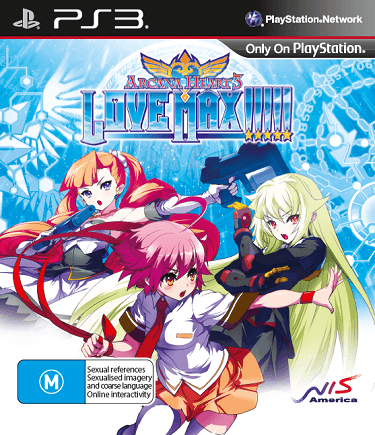 Story
While the game’s storyline is far from stellar and continuity can generally be ignored in this case, it is unfortunate that Arcana Heart 3: Love Max!!!!! picks up after the events that took place in the unlocalized second title. As such some of the new characters and events will obviously be out of place even if you played the first game in the series. 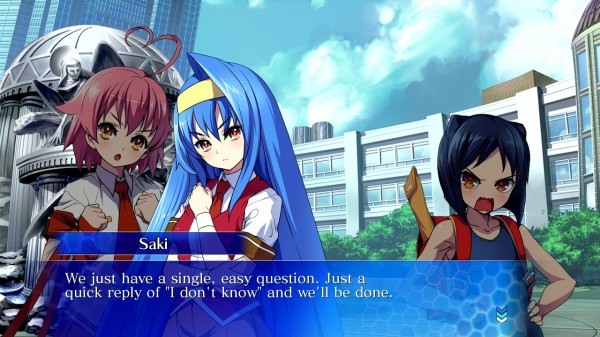 That being said, things are rather nonsensical in the first place. Each of the twenty three girls on the roster have a unique storyline that will be told over the course of a handful of fights, though the base story that runs through all of them involves a dangerous machine that, once activated, will annihilate Japan until your chosen fighter can put a stop to it.

The way that the story mode handles the fights is a little bit interesting as some battles can be chosen by the player, allowing you to see different tidbits of dialogue as your character speaks with her opponent before and after a fight. The personalities of these girls are pretty commonplace and there are already some established rivalries in place such as the one between the dog-eared Konoha and the Inuwaka clan on who should protect their master. 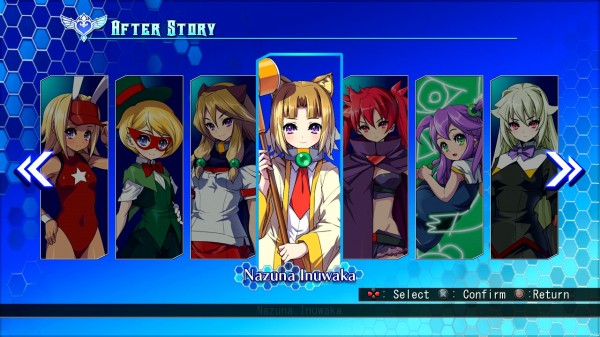 Sadly thanks to the base storyline, the actual story modes are very thin and unless you really like a specific character, there is unfortunately little quality here as the company went for quantity instead. There is a notable addition called “After Story” which is a short visual novel for each girl that gives players a little extra time with the cast with one or two fights mixed in, but even here these short tidbits do not give players much to really go on other than what character fits their preferences.

Gameplay
One thing great about Arcana Heart 3: Love Max!!!!! is how large and varied the roster is. There are twenty three fighters to choose from and each of these characters not only has a unique fighting style complete with different special moves and extra gauges to keep an eye on (many characters have unique traits that accompany their fighting style and potentially limit or strengthen moves), they can be accented with Arcanas. You see, while each girl may have a set Arcana that fits her personality, the player can choose to use whichever one they want to.

The Arcanas not only provide the player with some extra special attacks but also numerous normal attacks as well. This can be used to help cover a character’s weaker side, such as having a short reach. Of course given the fact that players can always keep the pace of the game moving quickly thanks to homing glides and attacks plus the option to use “Simple” controls that allow inexperienced fighters to use special moves and finishing attacks without too much trouble, and you’ll find one of the faster fighters out there. 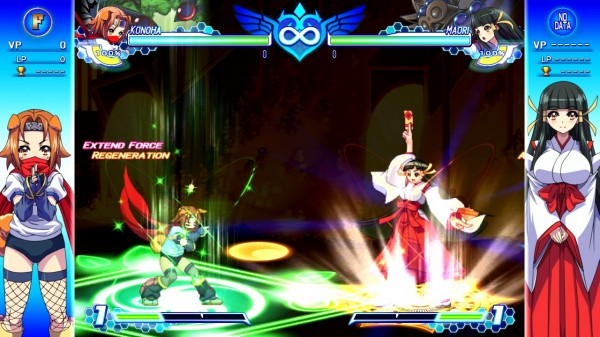 Players will be able to take these fun fighting mechanics into Arcana Heart 3: Love Max!!!!!’s plethora of modes as not only does this title offer your standard Versus, Training, and aforementioned Story Mode, there are also options to take on Trials during fights, take part in Survival Score Attacks and Time Attacks, plus an option to fight other players online where you can take advantage of a relatively smooth netcode if you can find an opponent actually online to fight against.

Visuals
Arcana Heart 3: Love Max!!!!! harkens back to the days of sprite based fighters where the detail of the characters was a bit lower and the stages weren’t the best looking. This is likely due to the low budget that Examu had to work with at the time but despite these limitations, they have actually produced a colorful game that flows smoothly even when the battles pick up the pace and special moves fly around the stage causing explosions and other special effects. 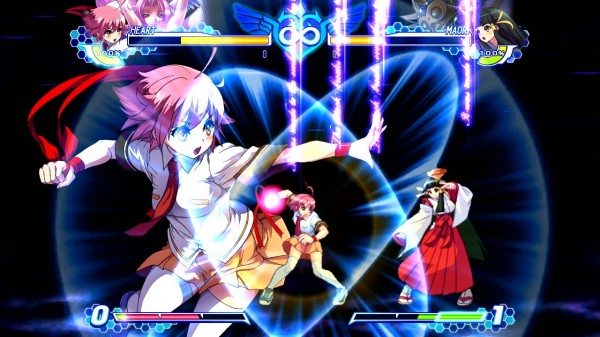 It is also worth noting that the twenty three character roster is going to likely be a big hit with anime fans as their absurd but cutesy designs are right up that alley. From a vampire girl on roller blades and a school-swimsuit clad girl riding in a blob to shrine maidens and mysterious fighters, this title tries to fire every possible trope out there into the world.

There is one thing that I found delightful but some may not, and that is the way the side-bars work. Due to the SD nature of the game, these side-bars help keep the action contained and although players can choose to shut off the movements on these bars, they will display the current fighting characters. You see, as the fight progresses these characters will make various motions along the side of the screen if they are taking damage or using special moves, adding a nice piece of aesthetic to an already colorful title. It is worth noting that, as you can see, these side-bars can be removed however it does affect the perspective of certain attacks, making these side-bars something that is generally necessary to properly utilize every technique the game can offer.

Audio
As one would expect, Arcana Heart 3: Love Max!!!!! has been released with only the Japanese voice track and this is good enough as many of the voice actors are quite fitting given the nature of the characters they are playing. One thing that is unfortunate however is how little of the text has actually been translated. Only the visual novel dialogue sequences before and after battles has been translated, leaving everything else, including loading screen dialogue, untranslated which simply feels lazy. 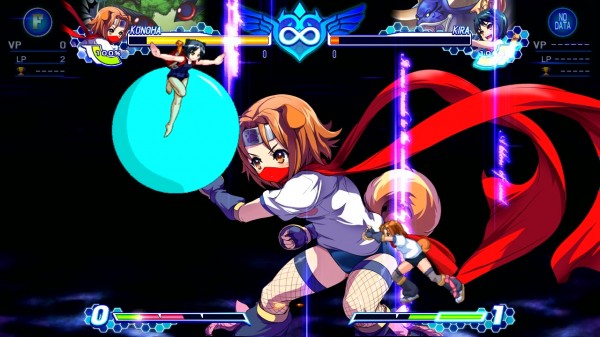 There are a number of different pieces of background music used throughout the title but sadly none of them really stand out in any special way. In fact even the opening theme is simply a standard musical number with nothing extra added, not even vocals.

Overall
Arcana Heart 3: Love Max!!!!! is a fun and nicely paced fighting game that sports a large roster of fighters that are both varied in style and fun to use. Unfortunately the game’s storyline still finds itself rather lacking and the old-school visuals have begun to reach the limit of their usefulness without having some sort of touch up. Arcana Heart 3: Love Max!!!!! will be a fighting game that anime fans will likely get the most out of thanks to the designs and personalities of its characters but even those simply looking for a new 2D fighter to try out will find a solid experience here.