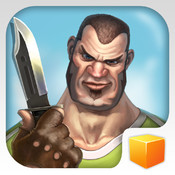 AntiSquad is a turn-based strategy game for the iOS developed by newcomers InsGames and published by mobile juggernaut Bulkypix. It’s presentation – in all facets – is very reminiscent of a certain Valve release. The studio set out to create a colourful cast of memorable characters to choose between, each with their own unique gear, ability and weapon sets that lend to player specialisations. Read on to find out whether AntiSquad breaks away from its obvious influences to find its own identity.

The AntiSquad’s first mission is to rescue one of their members named Cactus who, whilst on leave, decided to investigate a new synthetic drug being produced in his home town in Mexico. After getting in touch with some friends in the DEA, he went undercover at the responsible drug mafia’s lair but was not heard from since. His successful extraction leads to a further investigation into the cartels of the Wild West prairies and East Asia. There’s really not much to be said about the uninspired story of AntiSquad, as it is little more than your basic infiltration team going in to bust some baddies and end a drug-trade, guns-blazing. 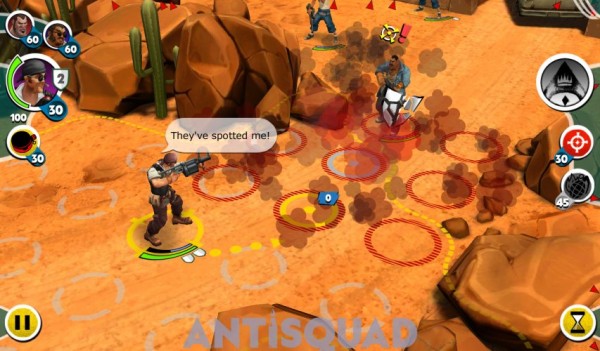 There are 7 playable characters at your disposal, any combination of which can make up your team of 3. Two of them – Valery (Scout) and Hammer (Machine Gunner) – must be “hired” with rubies, the game’s micro-transaction currency. Thankfully, you never feel forced or it truly necessary to make a purchase. The remaining 5 are unlocked from the start: Backet is your typical ‘Demolition Man’, Teddy the ‘Assaulter’, Rose a ‘Scout’, Cactus the resident ‘Sniper’ and finally Sunny, another ‘Machine Gunner’ (basically a ‘Heavy’). Experimenting with different combos may be the key to succeeding on particular maps, especially when the higher difficulty levels come into play. 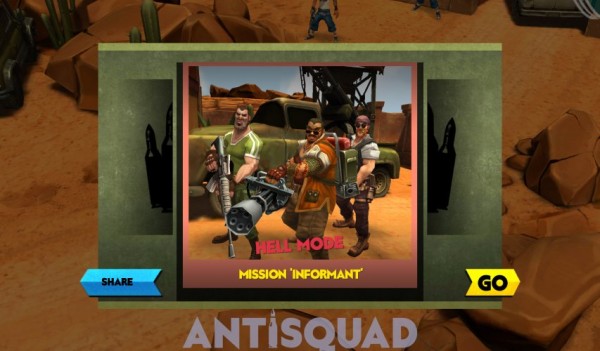 Each of the aforementioned characters have their own special abilities, attributes and attacks. Items can be equipped which provide buffs such as additional shielding and other various effects. Rescuing Cactus acts as your tutorial campaign, but if you choose not to partake, the “Useful Info” sub-menu can be accessed, including graphic tutorials on the game interface, buffs, infographics on the ground and bonuses, the latter of which are attained by looting the bodies of defeated bad guys. Every move you make depletes your Action Points (AP), and double tapping on the portrait of anybody on screen will take you to their info page, detailing their traits.

Shooting range is signified by a coloured outline on the ground, with possible movement options highlighted by a broken white circle. It can be tough, at first, to be mindful of your foes’ field of view and shooting range, if only because you need to check their values before making a move, needing to calculate exactly how many steps you can take whilst staying at a safe distance. There is a lot of visual learning to be done. Interface elements on a whole could have been more succinct and better communicated. I also found myself tiring of taking multiple turns to round a block or get into a confrontation. At its core, AntiSquad has a good foundation, but could do with some tweaking.

It’s pretty clear which Valve title I referred to in the overview… AntiSquad screams Team Fortress 2. And I don’t just say that because of the art style – which is maybe slightly less blocky and cel-shaded. The tone, the character archetypes, the music, the colour palette and even the type used for all the text is extremely similar. Its influence couldn’t be any more evident and overt, which isn’t necessarily a problem in and of itself in most cases. However, when a game shares so many facets, in presentation or otherwise, with a bigger, already established and popular title, it fails to mold its own identity. For me, that’s exactly what happened with AntiSquad. 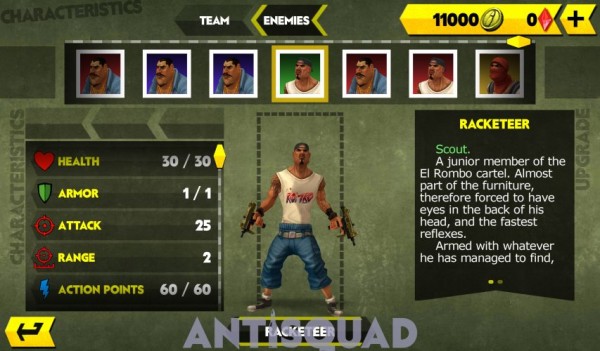 It also doesn’t help that the majority of the cartoon-like character and level designs are quite flavourless… there’s nothing individual about AntiSquad‘s art design at all. Other than its startling resemblance to Team Fortress 2, musically, the main themes remind of something pulled from Sly Cooper. It’s playful and upbeat, featuring lots of staccato horns with a bass guitar providing the groove and a basic drum beat. One word immediately comes to mind upon hearing it: espionage. At least, thematically, there is a consistency here; I just hope that others can use this as an example of why you should strive, not to imitate, but to innovate (on all fronts).

AntiSquad is a solid entry in the TBS genre on mobile platforms, but is marred by now clichéd character archetypes and bland enemies, locations and story. It’s hard to stay mindful of your foes’ field of view and shooting range, and while hints are readily available as a reminder of the systems in place, I feel overall it could have been more streamlined and intuitive. The game’s pace can also be on the slow side at times. Nonetheless, there’s value to be extracted from the experience, with Game Center achievements, unlocked difficulty levels and challenges promoting replay-ability. It just doesn’t do an expert job in other departments to hold your interest and keep you coming back to tackle those achievements, harder play-throughs and challenges.