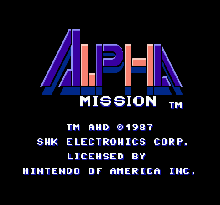 Man, there are quite a bit of arcade re-releases at the moment. Apparently that seems to be the business right about now. With that in mind, it’s time for another downloadable re-release review. This time, space is the setting. Get ready for a deep adventure as you, the player, divulge into different alien species, turrets and big bosses in Alpha Mission. This 2D vertical scrolling space shooter, developed by SNK, was released in arcades in the mid 1980’s and now appears as part of the Playstation minis range. It features classic space gameplay, delectable 2D graphics and retains the 8-bit music. However, how does it hold up today? 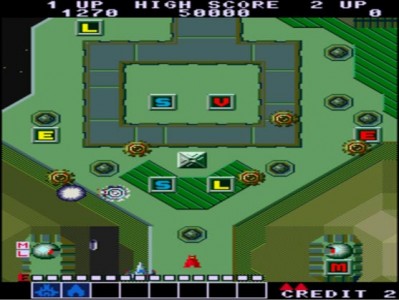 Gameplay
The objective of the game is to save the space stations from total annihilation. Now, since I have that out of the way, let’s get into the gameplay. The game is classified as a 2D vertical scrolling space shooter. This means that the main controls focus on moving and shooting. Using the analogue stick or directional button will move you around and pressing the X button will shoot a regular, infinite missile. This laser attack is used to attack the various enemies that zoom all over the screen. Players will also have a second attack available for them, which is activated by pressing the circle button. This will launch a second missile attack used to get rid of those nasty turrets or some grey boxes. Inside those grey boxes are power ups, ranging to more powerful missiles to filling up a small bar at the bottom of the screen.

I should get into that bar at the bottom of the screen. Throughout the stage, you will pick up pieces of spaceship armour. You will also pick up items which fill up the bar at the bottom of the screen. Once you ensemble space armour (which will appear as a icon below the bar) and fill the bar past that particular armour, pressing square will activate the armour, allowing you to access different weaponry, like the eight-way laser armour, which allows you to shoot the laser in eight different directions simultaneously.

I should get into the difficulty as well. Unlike the arcade version, you can choose to change the difficulty: Easy, Normal, Hard and Hardest. Expect a relatively tough time if you are not experienced with this genre. Most of the time, it may seem tough because, like most games at this time, there may be too many projectiles on the screen. The boss battles have that problem. Also expect to play alone as it does not support co-op. Other than that, the gameplay is fun, to put it simply. 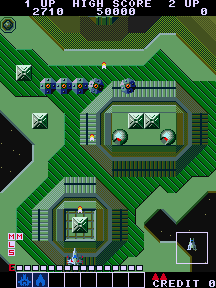 Visuals
Considering that this is just a re-release, expect the graphics to stay true to the original arcade version. It doesn’t mean they look ugly, it just means they will look outdated. But hey, apparently being retro is cool nowadays. Beings serious, the visuals are done quite well for an arcade game. The spaceship is a mix of red and white, distinguishing it from the blue squares and light brown circles that are your regular enemies. The space stations you defend are a bright green which dominates the black background of space, complete with white stars jotted all over the place. Bosses vary in size and colour. The animations are basic but smooth. Each enemy has a pre-determined path, like most of these games. The bosses, however, just move left and right, shooting projectiles by the bucket load. Overall, I enjoy the look of the game. It reminds me of the early days of my gaming experiences (despite being born quite a few years after its release). 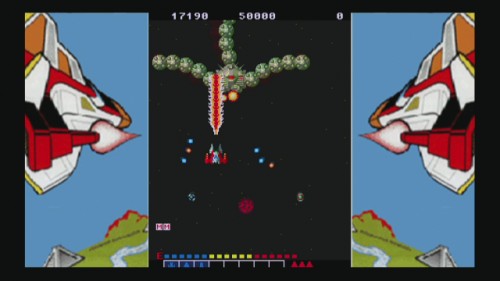 Music
Just like the gameplay and the visuals, the game retains the classic 8-bit style music. As for the tracks themselves, they aren’t pieces of music that will destroy your ear drums. Instead, the tracks are pretty good. The level tracks often change with each stage but they are great. They capture the sense of a space adventure as well of an impeding danger. The sound effects have that classic sound as well. Shooting lasers, missiles and their explosions will take you back to those days of youth spending too much silver into those arcade machines. Overall, the music is enjoyable.

Overall
If you do enjoy the sights and sounds of a great 2D vertical scrolling space shooter as well as a game with the basics, then I do recommend Alpha Mission. The gameplay is enthralling and fun and the visuals and the music are great for a mid 80’s arcade game. With that being said, expect a somewhat tough fight on your hands, no matter the difficulty. It is also a direct re-release, so don’t expect any additional features outside of saving the game. It even wants you to “insert coin” (which is triangle, by the way) at the title screen.