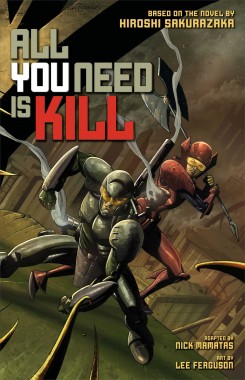 “All You Need Is Kill”…to think; only a few months ago this particular story was barely known. Not to say it was unpopular, it was just that a small audience were aware of such a tale. Now…well now it has grown into a pop culture goliath! What was once just a Japanese Sci-fi novel has now become a manga series, a graphic novel and a feature-length film starring Hollywood royalty Tom Cruise. What was the catalyst that set “All You Need Is Kill” ablaze with popularity? Some say the book itself while others say it is the movie. I’m not too sure about that, but what I am sure of is that there IS a reason behind it’s success and it may just be the story it tells. (Read the Travis Bruno review of “All You Need Is Kill” by clicking here)

Keiji Kiriya is a Japanese soldier currently fighting in a war against interplanetary monsters known as the “Mimics”. These alien creatures arrived on Earth with only one thing in their sights; complete and utter domination. Our planet couldn’t just sit back and let the Apocalypse rain down upon them so they begun their counterattack. Soldier equipped with power suits titled “Jackets” are thrown into the fires of war with the hopes that we will be the ones to come out victorious…but hope is not something the existence of a planet can survive on. Keiji dies at the hands/tentacles of the Mimics one fateful day but id reborn the next, left with nothing but feelings of Deja Vu.

Death falls upon Keiji once more but, the same as last time, he awakes to live out the same day again and again. He soon realizes that he has retained his memories from before the last time he died and uses this new found “ability” to train himself into becoming the greatest soldier and the Earth’s only hope at stopping the seemingly inevitable invasion. He alongside fellow soldier Rita (also known as the “Full Metal Bitch”) will do everything they can to figure out the “Loop” and to stop the Mimics once and for all, saving Earth and its people. It’s a great storyline.

“All You Need Is Kill” has one of the most unique and interesting plot lines I’ve honestly ever come across. It’s like a mix between “Groundhog Day” and “Independence Day”. It’s quite intelligent and the original novel being such a success has made evident by the explanation of the story and characters within it. The only problem I have with the graphic novel adaptation – unfortunately it is a big one – is that it is massively rushed. You’re not given all the information you possibly could have, you’re left only with the fundamental parts of the story.

Basically enough so that a reader can understand what is happening but is left wanting so much more. Sometimes the dialogue did not even make sense because of how compressed the entire telling of it was and it really made for a disappointing read. It took me barely half an hour to complete the graphic novel and by the end I felt as though I had just read a long issue of a comic. The good thing is that it tells a fantastic sci-fi story that really any fan of the genre can get into and enjoy, the bad thing is that it’s so compressed it looses gravitas which is something a tale of this caliber absolutely needs.

Lee Ferguson – the illustrator for the graphic novel – has quite an impressive art style. It’s both simply yet detailed and was utilized properly to nicely show the effects of war and the destruction of a battlefield. Set out like a typical graphic novel of its kind, “All You Need Is Kill” featured some beautifully gritty illustrations alongside a well-suited colour palette that, while sometimes vibrant, was dark and dank enough to highlight the grizzled effects of intergalactic war. I did find it sometimes hard to actually understand what it was that I was seeing and some things did fall to the wayside or blend in to other illustrated pieces but, for the most part, it was well put together and looked great.

Don’t let the hype surrounding “All You Need Is Kill” cloud your vision; the graphic novel IS good but it is clear that it is also lacking. It seems as though it’s heavy compression of the story is what is truly setting it back. Had the graphic novel been a little longer, I could imagine it would have been a great deal better. It’s such a great story to let yourself become engulfed by but you can’t exactly do that when you’re not getting the full story.

If you’re a fan of the original than the graphic novel may be something you’d love to purchase and I urge that you do because it is you who will be able to appreciate it the most. A good comic book/graphic novel must both look good and read good, “All You Need Is Kill” only does one of those things and it seems as though it just wasn’t enough.