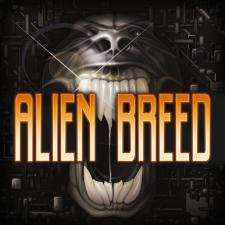 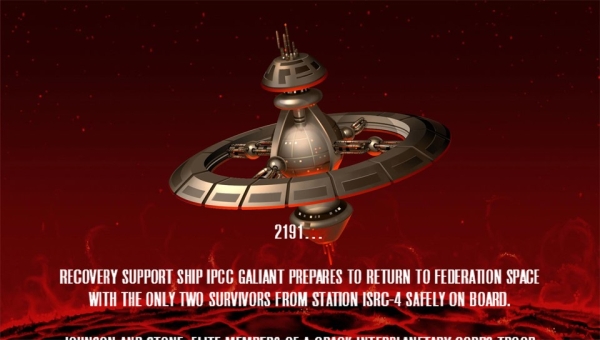 Overview:
Alien Breed has been around for over two decades. It was originally released for the Amiga in 1991, just a year after developer Team 17 opened its doors.  Though it has gone through several iterations, Team 17 have decided that it was time to grace the public with a re-release of their original blockbuster, as well as bundling a few other goodies along with it for the ride.  How does it hold up?  Should it be hoisted to its own home world or left on the space station with an active nuke?  Let’s find out.

Story:
The story of the Alien Breed series is fairly standard science fiction fare.  The year is 2191.  Humans are no longer bound to stay on our home world and space colonization abounds.  Just like people, crime has spread across the galaxy, so the I.P.C. is formed.  Two of the IPC’s crack agents, Johnson and Stone, are called in to check out a renegade station that has gone completely dark.  Little do they know what awaits them inside. 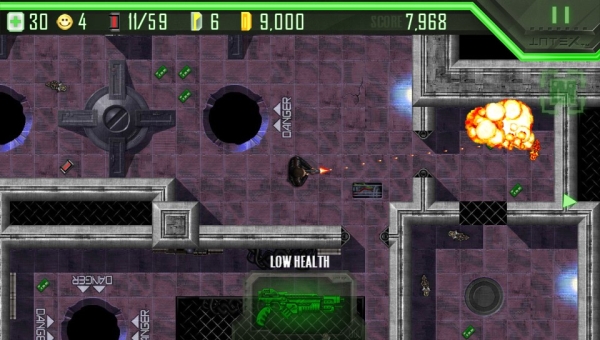 For the uninitiated, Alien Breed is a top-down shooter with a bit of a survival-horror vibe.  As you walk through each level, you will pick up money, health kits (that’s right kiddos – no regenerating health back in the day), and keys to open doors with the primary goal of working your way down through the space station one floor at a time, usually destroying the previous floor before you do. 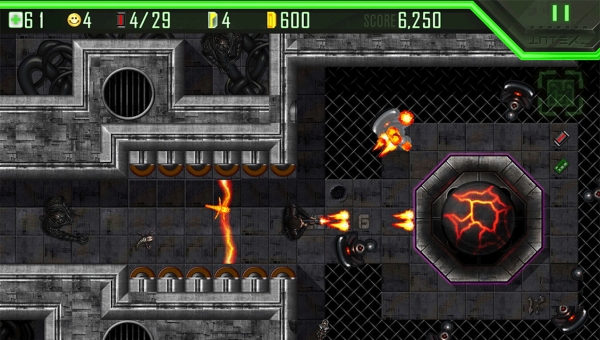 On top of the added level packs, several other goodies have been tossed in too.  The game includes the original experience, complete with 16-bit graphics, original sound effects, and the inability to shoot at anything you aren’t looking at.  Given how far games have come in the last 22 years, it can be hard to swallow this version if you weren’t a fan of the original to begin with.  Newcomers will likely want to give this a go just to see what it was like then go right back to the Enhanced version.

The Enhanced version has done wonders for updating the game over the years.  The entire game has had a graphical facelift.  On top of that, the sound effects have also been brought up to date.  The most notable update, though, is in the control scheme.  The enhanced edition allows players to use their right joystick to effectively turn the game into a twin stick shooter.  This does wonders for playability, though at times it will actually make you question whether the game should be even harder than it is. 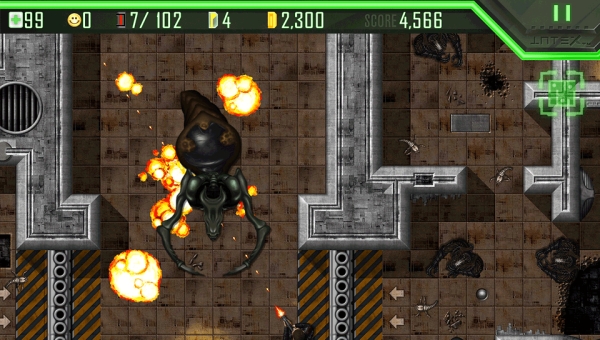 Regardless of the version you play, the mechanics are the same.  Each level is set up like an intricate maze with a goal to reach.  There is always a short story setup to let you know why you’re doing what you’re doing.  The goals usually wind up boiling down to reaching a point or multiple points on the map and either touching them, blowing them up, or destroying whatever creatures lurks there.  Along the way, you’ll pick up keys to get you through doors.  There are also one-way laser-based doors.  One of the most frustrating things about the game, especially to newcomers early on, is going through one of these one-way doors with no keys and getting trapped inside a room with five lives to spare.  There’s literally nothing you can do at that point but end your run of that level and start again.  It can be infuriating.

The really difficult part comes after accomplishing your goal, though.  The screen will turn red and you will have a timer, usually 60 to 90 seconds, start timing down.  With alarms blaring, you will have to make a mad dash to a lift to get off the level.  While this sounds fairly basic, it’s compounded with the fact that you’ll have to work your way backward through the maze, taking out the xenomorphs you encounter along your way.  If you take a wrong turn, it can land you in a dead end, wasting precious seconds that could cost you your life.  It’s a truly exhilarating experience, but it can end in total disaster, forcing you to replay the entire mission. 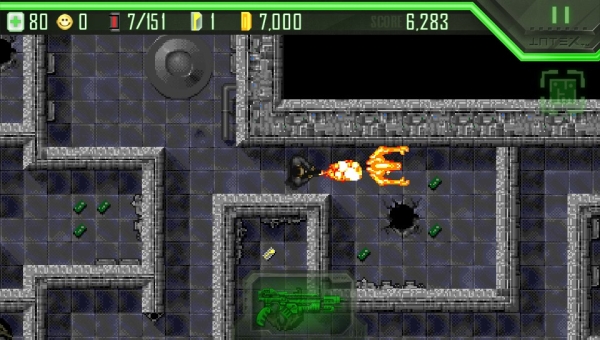 When you first start the game, you’re equipped with only a machine gun.  As you earn money, though, you can go into an in-game menu and purchase new weapons.  These include things like shotguns, laser rifles that bounce off walls, flame throwers, and more, and give the game a fascinating and much needed change of pace, as you’re usually ready to try something new by the time you can buy it.  Much like the Contra series, this gives you a whole slew of ways to take on the alien horde.  There are a total of 12 guns to buy, giving you a full array of firepower at the end of the day.

As you progress through the game, whether you conquer or die, moving from level to level or across campaigns, your progress stays with you.  If you’ve unlocked a gun at any point, you can always access it later.  This gives the game a real sense of accomplishment and it can be fun to show off your arsenal to friends.

Speaking of showing off your arsenal to your friends, you can have a buddy jump in to play couch co-op or online co-op with you.  It feels great and the pair of you can choose whether to stick close together or split up to explore some more.  While the game is great on its own, playing games like Alien Breed are always much more entertaining with a buddy. 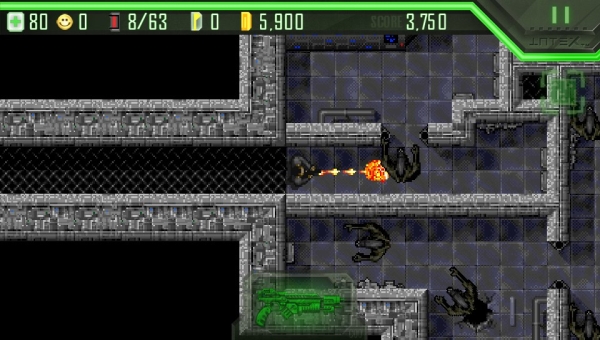 Visual & Audio:
The retro graphics and audio are true to their 1991 release.  It feels like being a child again.  That said, the visual and audio upgrades in the Enhanced version are very much appreciated.  Everything is a bit crisper, including sound effects.  Don’t expect much in the way of music, though.  There is only one sci-fi track that plays at the menu, and music is completely non-existent in the middle of gameplay.  Sound in-game amounts to little more than the humming of engines, the sounds of firing guns, the screams of dying aliens, and an incredibly obnoxious AI that will let you know when you need a key or health over and over and over again.

Overall:
Alien Breed is a great package that brings back a classic game but updates it for playability and presentation in the process.  There are a few minor bugs that will annoy from time to time, and the sound design feels virtually non-existent, but the gameplay is a lot of fun and for the price, you’re getting the game on both PlayStation 3 and PlayStation Vita.  This is definitely one title shooter fans and people with old-school sensibilities should check out!