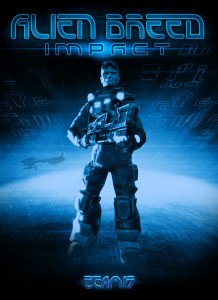 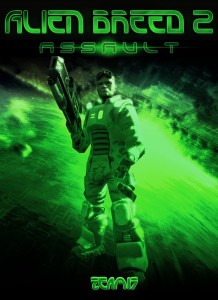 The creators of the hit series Worms also have a game that is decidedly less goofy and much more violent.  That game is Alien Breed.  Did Team 17, developers behind the game, pull off a digital download feat that surpassed their previous title?  How does the game fare among other games in the same market class?

You play as Chief Engineer Theodore J. Conrad.  Assisted by his AI counterpart, he must save his ship from certain disaster.  After jumping out of hyperspace, the ship Leopold collides with another ship.  As if a damaged space vessel is not enough to deal with, aliens also cross over to your ship.  Like most mysterious creatures, these aliens don’t have friendly intentions.  What is a hardened engineer to do but to take pick up his gun and blow away these blood thirsty enemies. 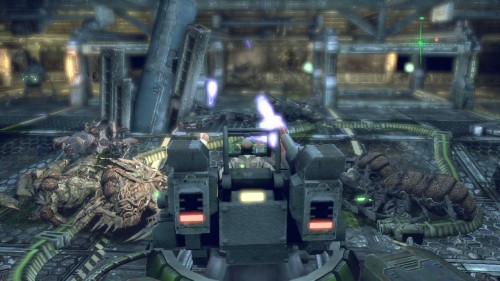 Each main story cut scene is like a frame from a comic book.  I really wish that Team 17 would have spent a little more time on these parts of the game. Monochromatic color schemes drag these moments down.  This is especially irritating when you view the smaller in-game cut scenes that happen occasionally.  These littler videos are good quality, but they only demonstrate such minor things like where a certain piece of equipment is or where a boss erupts out of the environment.  Nevertheless, even though the presentation may not be the most exciting, the content therein is much better.

Quite simply, this story is fun to play through.  It is an action romp through a unique universe filled with some shallow, but entertaining characters.  Yes, it may not stick with you after your done, and it does not necessarily have the most amazing plot line.  However, it will keep your attention for the entire experience, and I never got bored wondering what was going on.  Instead, I rather enjoyed learning about the heroes and denizens of the world.  In fact, it was the prime reason that I kept playing the game.

Alien Breed’s camera is in a top down isometric view.  As with most games that have this type of camera, it does cause problems.  Cramped corridors can make navigation annoying.  Nonetheless, it is nice to play a shooter that isn’t an FPS; the variety is nice.  Plus, the controls are set up in way that makes the camera less of a pain.  Pressing the L1 or L2 key will allow you to turn view an incremental amount with each press. Although it takes a little bit of getting used too, the controls are not impossible to manipulate.  You can also move around in 360 degrees, while using the twin stick control system to gun down the fools attacking you.  One stick controls your laser sight and the other your body.    Different gun types and weapons add additions to the game too. 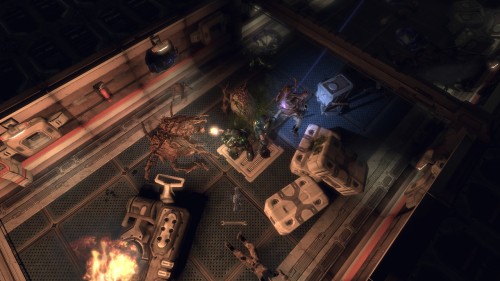 In order to complete the game, you must explore the ship collecting items, repairing consoles or ransacking dead bodies.  Initially, I felt that this was much too repetitive.  After all, most of the time, you are merely running from one computer to the next.  In between these machines, you have to battle aliens or upgrade your stats, guns and health.  However, I quickly became addicted to this cycle.  I kept thinking that I would just upgrade one more time.  Or, just one more way point.  One more gun battle.  Finally, I realized that I was actually having fun.  Alien Breed is extremely linear.  You literally walk up to a computer and hold down X for 5 seconds hundreds of times.  Performing these actions dozens of times throughout the 5 surprisingly long levels may seem like lazy design.  These elements are actually fun though, as each time you do them  you feel like you are accomplishing something and that parts of the ship are coming alive again.  I should note though that all the enemies are recycled, but the boss battles are not bad if you like arena style firefights that devolve into wars of attrition.

One part about the game that I did hate though was the unbalanced gunplay.  I constantly felt like I was out of ammo.  Most of the time, I ended up running around with my underpowered pistol struggling to get through.  The game also uses an the outdated system of health packs.  Scrounging around to pick up health packs, and then dying a few minutes later only to have to go back and collect the same health packs again can be frustrating, especially when your low on health and facing a mountain of fast paced enemies.  Dying 10 times in a row is even worse when you have to wait 30 seconds to respawn.If you do get easily thwarted by difficulty, I would recommend setting the initial play through on Rookie setting, as the game scales up pretty fast.  Changing the brightness settings also helped me to actually see what I was shooting at too. 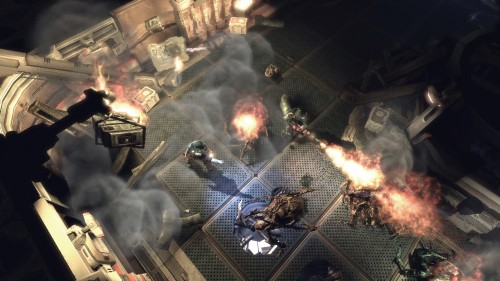 For only ten dollars each though, you do get your money’s worth.  When I first started up the game, I immediately said to myself, “Dang, these graphics are good!”  The 2nd game in the series has improved graphical performance, but they both look very fine.  Bumbling around in a broken down spacecraft is all the more awesome when it looks spectacular.  Detailed they are, down to the gleaming floors and the fleshy alien guts.

Both games have coop modes, although these feel a little tacked on.  The sequel has a mode called Survivor though.  It is basically a coop firefight wave mode, where the baddies just keep on coming and don’t stop.  This adds to the value of the game and makes replayability options greater.  This mode is also available for single player. 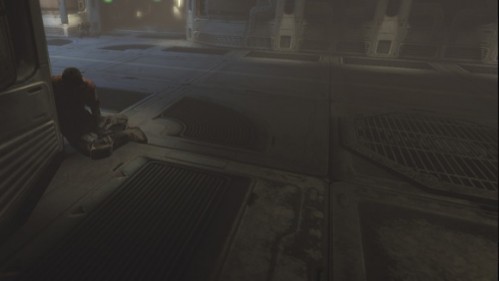 In conclusion, Alien Breed feels like a game from the last generation of consoles.  It is a solid action game, but it is also very samey.  No matter how addicted I got, I still couldn’t shake the feeling that I was just replaying the same game  over and over.  Both games each had very similar objectives, and only the story and some of the artwork was different.  All in all, for this price you are getting  a quality game that has quite a few features and lots of neat weapons.  If you have only the money to get one of these, I would suggest purchasing Alien Breed 2: Assault.  Gameplay improvements and graphical enhancements make it the best  option.  In addition, you won’t be confused by the story, as the developers put a special beginning  video in there just for such occasions.