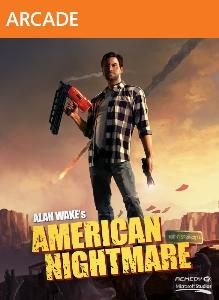 Overview
In 2010, Remedy introduced the world to Alan Wake. For those who were living under a rock at that time, that release introduced players to a new type of survival horror, where the player must make their way through darkness and defeat enemies by using light along with a limited supply of ammunition. Much like Deadly Premonition (which also was released in 2010), Alan Wake received an almost instant cult following due to it’s unique mechanics and storytelling, leaving fans hungering for more. Just two years later, Remedy are ready to bring the lone writer back, but this time with a purely digital release by the name of Alan Wake’s American Nightmare. The big question that many fans of the original (including myself) have wondered however, is if this title has that same atmosphere and gameplay that kept us all coming back for more. What’s the answer? Here is my review for Alan Wake’s American Nightmare. 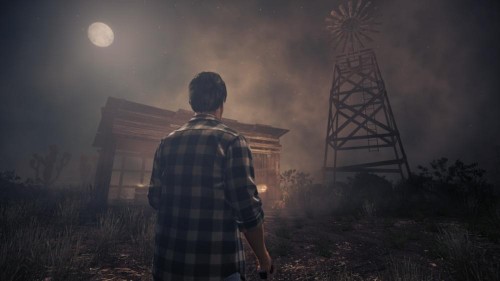 Story
The first thing you should know about American Nightmare is that you don’t have to play the original to get a full grasp on the many mysteries and twisted narrative that await. That’s because this title isn’t quite a sequel, but more of a side-dish that attempts to further fuel the complex world that Remedy created. This tale takes place within Night Springs, a television show that Wake himself penned, but now seems to be trapped in. A darker, more insane version of Alan by the name of Mr. Scratch is the culprit behind the madness, and is making our Champion of Light repeat the same series of events over and over until he breaks the chain by stopping murders and restoring power in three different areas. 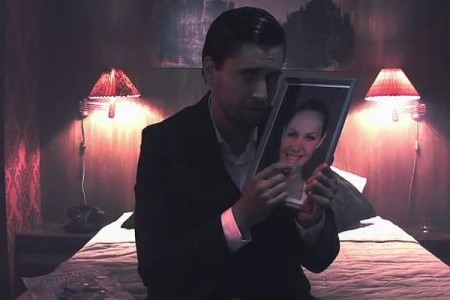 While this follow-up of sorts is a bit lighter on actual mystery and exploration, it still has that sharp dialogue and an equally intriguing plot that fans of the first are sure to feel right at home with. Mr. Scratch is a villain that is hard not to love, as players will see this new foe perform maniacal actions, only to follow them up with a dance number or quick one-liner. Other characters come off as a bit clueless, leaving Wake to connect the dots for them while offering assistance if needed. The interaction is a bit more limited this time around as well, but luckily there is still a good amount of back-story for the small cast, with manuscript pages scattered about that offer the player some enlightenment on Wake’s several encounters. It felt like there was a new turn of events around every corner and even though American Nightmare isn’t as long as it’s predecessor, the fantastic writing has stayed in tact and opened even more possibilities for future entries.

Gameplay
As far as the gameplay goes within American Nightmare, players should expect nearly the same mechanics found in Alan Wake. You still have to defeat the Taken by shining a light on them before blasting them to bits with bullets, and the game has also retained it’s third-person view in terms of perspective. However, just because the control scheme is nearly identical, that doesn’t mean that Remedy haven’t improved the formula somewhat. One of my only complaints with the first title was that the controls felt a bit loose and controlling Wake got a bit awkward during action-based segments as a result. These small flaws are still present, but this time movement feels a bit tighter and it’s much easier to leap out of danger while dodging a swarm of foes. Dodging however is still a mixed bag, leaving the player to rely on timing rather than accurate movement to avoid damage. 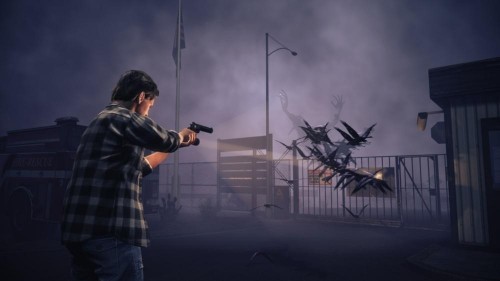 There is also more ammunition this time around, and when I say more, I mean you will rarely be without bullets as drops are common. The nailgun will more than likely be most player’s weapon of choice, as it can hold up to 100 nails at a time and is quick on reloading. There are plenty of other types of actual guns as well, but I never felt a need to change as this unique tool found early on in the game performed well enough to keep me out of danger until the end. Flares and flashbangs prove useful too, biding Wake’s time as swarms of enemies become stunned instantaneously. I do wish there was a bit more creativity when it came to deciding light-based weaponry, but everything does it’s job well enough and even though you rarely see a change in techniques, there is little reason to fear repetition with the varied types of Taken that Wake will have to charge through.

This time, the Taken are a bit more vicious and seem to try to overwhelm the player by attacking in large groups. One breed in particular will split into two each time your light hits them, which can quickly turn into chaos unless you happen to have some kind of throw-able light source equipped. Remember those pesky birds from the first title? Yeah, those are in too, but now take the form of foe who is both agile and nearly impossible to outrun. Along with your usual big bads with chainsaws and grenades, spiders were also thrown in to antagonist the player, but don’t fit in as well as the rest of the enemies, leaving their inclusion to feel a bit forced. Even with that said though, one still has to respect the variety offered, which definitely delivers a nice satisfying – but never frustrating challenge. 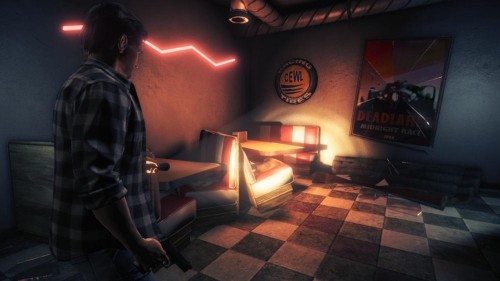 After just one-third of the way through the game, you will quickly realize that you, as the player, are trapped in the same repeat of events as our protagonist. The same three areas must be explored multiple times, and changes are very minor at best. As I mentioned, this does tie into the plot and makes complete sense due to the narrative’s pacing, but re-tracking through the same three locations can gnaw on the player after the second time through. To kill off a bit of the “been here before” feelings, television sets and radios prove to be fine entertainment as the player can get caught up with Mr. Scratch or hear radio shows that clue us in to the bizarre in-game universe and colorful cast of characters. American Nightmare is of course a survival horror experience at heart, but there is still a fantastic B movie that is dying to get out and piecing together all of the lore is really what makes this title so endearing. 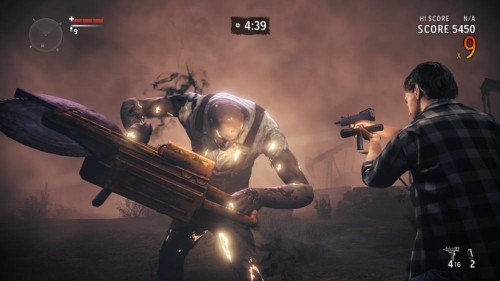 After you finish the main story, there is still Arcade mode. This bit has the player attempt to survive for ten minutes, where the difficulty rises the longer you stay alive. There are ten distinctly different stages in all, and it’s simply your job to keep gathering ammo, upgrades, and of course living until dawn breaks. Killing multiple Taken at a time boosts score as well, with a combo multiplier delivering the player even more points as they slaughter the dark foes in bundles. The only downside to this is that the rounds are ten minutes long, and the lack of variation in weaponry makes this mode unlikely to be played for more than one or two rounds at a time. I could definitely see Arcade being improved upon in the future though, so hopefully next time we will see some more mechanics added, and the timer take a much-needed downsizing.

Visuals/Audio
Visually, Alan Wake’s American Nightmare looks just as good as any other current gen game for the Xbox 360, as the models are realistic and heavily detailed. Alan’s open flannel shirt is constantly flowing with the air as you run, and each environment seems to tell a story in it’s own unique way. It’s hard not to appreciate the glow of a dimly lit hotel sign as you look for safety, and being alone in utter darkness is still as unnerving as ever before. The cutscenes in the game are done a bit differently and performed by actual actors (or actor, for the most part). Instead of being the kind of cringe-worthy, forcefully acted scenes we seen for the likes of nearly every title with FMVs dating back to the Saturn, these are always a treat to view and mesh perfectly with the in-game world. 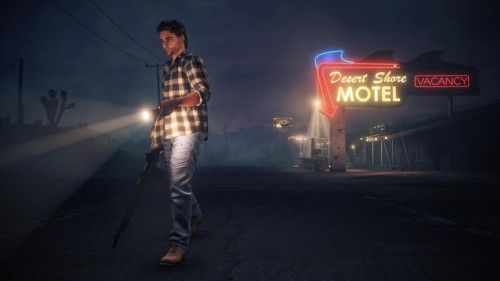 I could go on and on about how well done the voice acting is, as Alan Wake’s actor does a phenomenal job, but that’s not really the highlight of the audio you will take away. This title in my opinion has one of the best soundtracks on the console as a whole, blending in rock beats to fuel the intensity of combat. You may never know when your about to face a grave challenge during some moments, but once you hear one of the several tunes fire up, it’s time to kick ass and whip out that flashlight. It’s a rarity anymore to see any title enhance it’s already rich atmosphere with music, but the soundtrack here is definitely worth the full price of admission as it actually makes the hectic combat fun, rather than just trying to creep the player out the whole time with solemn and eerie tunes like most games from the genre.

Overall
Alan Wake’s American Nightmare is like nothing we have seen released on the Xbox Live Arcade thus far. While most on the platform strive to deliver a $15 experience, this title goes above and beyond to make the player feel like they just paid full retail and got every penny worth. Yes, there are a few minor flaws to this gem and it’s still a bit on the short side, but one has to admire Remedy’s work on the soundtrack and presentation as American Nightmare could easily stand toe to toe with any big budget title currently available. With that said though, if you weren’t a fan of the first Alan Wake, there really isn’t enough differences here to change anyone’s mind. Everyone else though should definitely consider picking up Wake’s latest work…Mr. Scratch is dying to meet you.