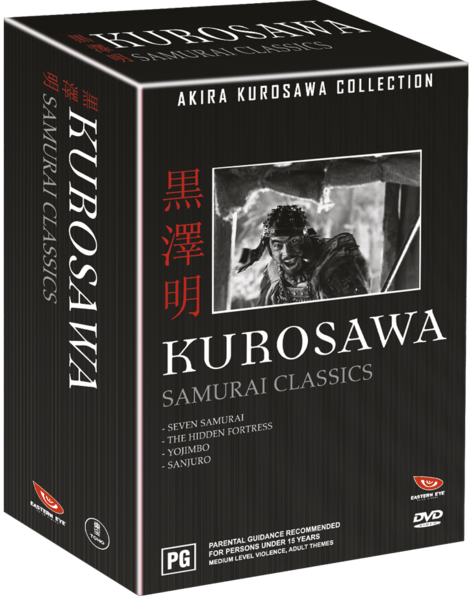 I think it’s fair to say that samurai are perhaps one of the coolest subjects about which to make a movie. Not only are they steeped in Japanese history and culture, but they are also epic heroes fighting for noble causes. And of course it’s impossible to mention samurai films without mentioning Akira Kurosawa.

For the uninitiated, Kurosawa was a Japanese movie director who directed 30 films in the 50 years between 1943 and 1993. From his first movie, Sugata Sanshiro (whose eponymous protagonist was the inspiration the Sega Saturn’s Japanese mascot “SEGAta Sanshiro) all the way to his final film, Madadayo, Kurosawa showed a true mastery of his craft. It was in 1954, however, while working for Toho that Akira Kurosawa brought the world his most famous film, Seven Samurai. This is also where this particular collection begins, and it leads us through the subsequent samurai classics The Hidden Fortress, Yojimbo, and Sanjuro. 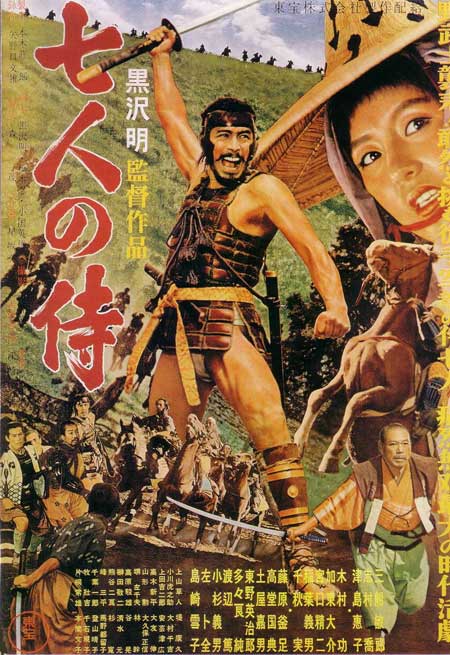 There is a reason that Akira Kurosawa became an internationally renowned director, and that reason is Seven Samurai. While the film is well known and popular in English speaking countries, starting back at its initial release in the US in 1956, English speaking audiences might be more familiar with this particular story from the John Sturges Western film The Magnificent Seven. The 1960 Sturges film was somewhere in between “inspired by Seven Samurai” and “totally rips Kurosawa off”.

The basic plot surrounds a poor village set during the Sengoku (“warring states”) period of 15th and 16th century Japan. Fearing an impending invasion by a gang of bandits that have vowed to plunder their harvests, the village decides to send a small group of its men to the city to attempt to hire protection. Upon meeting Shimada Kambei (Shimura Takashi), an aging veteran samurai and convincing him to lend his aid, it is decided that they will need at least six more men to sufficiently defend themselves.

This is where the movie spends a great deal of time, and it makes up the majority of the first act. For viewers who are expecting non-stop action it may seem boring, but the interactions between these seven very different warriors make for the telling of an excellent story. There is the young apprentice Katsushiro, who is eager to become a skilled samurai and has everything to prove to his older companions; the ever stoic Kyuzo, an incredibly skilled swordsman who initially wants only to perfect his art and declines the request for help; the friendly Heihachi, who is always quick to lighten the mood of his fellow soldiers. Perhaps the most interesting character of all is the temperamental Kikuchiyo, played by Mifune Toshiro. Mifune would go on to star in many other Kurosawa films (including all four in this box set) and it is clear that he is a skilled actor with a great range of emotion. Kikuchiyo is able to identify with the villagers’ plight more than any of the other samurai for reasons that are revealed throughout the course of the film, and he at first seems more of a lunatic than a fighter. Once the bandits arrive, however, he proves his ability to his six comrades.

The second half of the film revolves around the planning stages for the samurai and then finally ends in the climactic battle between the seven defenders and the thieving bandits. This is where many of these characters are developed more fully. The young Katsushiro finds love for the first time and wrestles with his conflict between romance and his duty. Kambei and Gorobei spend much of their time assessing the strategic needs of the village and planning for the day of the bandits’ raid. Again, Kikuchiyo offers the most interesting developments as the truth about his past comes out and he clashes with several of the others of his ethical beliefs.

When the bandits finally arrive, the film finally gets to the action that most viewers probably expected much earlier on. Kurosawa does not disappoint, with an epic battle between several dozen bandits and the heroic seven samurai. The fight lasts for several days, with both strategy and skill playing huge roles in determining whether the villagers will lose their crops and starve. The fight is not one easily fought, or without its share of losses, but the ending proves satisfying for both the emotions and the action. Ultimately, I can’t fault a single scene in Seven Samurai. While it may be too long for many viewers, clocking in at a hefty 3.5 hours, I think Kurosawa made the right decision in not cutting it down. Just as Lord of the Rings would have been diminished without a ridiculously demanding run time, as would Seven Samurai.

If the fact that Seven Samurai inspired The Magnificent Seven was impressive, then hearing that his next samurai film, The Hidden Fortress, was a huge inspiration for George Lucas’s Star Wars should really rattle some cages. Now, Star Wars definitely didn’t rip the story straight from Kurosawa like Sturges did, but rather the cinematography techniques inspired Lucas the most. I’ll get back to that in a moment. The Hidden Fortress is essentially the story of Makabe Rokurota, a general for the Akizuki clan, as he attempts to smuggle their princess Yuki and the last of the family’s gold into safe territory for the good of the clan’s survival. Rokurota and Yuki are not the only protagonists, however. The story really begins with two peasants, Matashichi and Tahei, escaping with their lives from the same battle that decimated the Akizuki clan.

This is what Lucas meant when he said Star Wars took inspiration from Kurosawa’s film. While The Hidden Fortress is a story of a general and a princess, a battle and a hidden stash of gold, it is told largely from the perspective of two unknowing peasants. Likewise, while Star Wars is a movie about a galaxy-oppressing empire, an underdog rebellion, and an undercover princess, Lucas used the two lowliest characters, R2D2 and C-3PO to tell much of the story.

On their way home from the battle, Tahei and Matashichi find that the border between kingdoms is closed and they are taken into slavery by the enemy. They are immensely lucky however, as an uprising gives them the perfect opportunity to escape captivity. The scenes that follow are perhaps my favorite part of the film, thanks to a combination of slapstick comedy between the two greedy peasants and a great twist provided by their increasingly surprising luck. While trying to start a fire with some scavenged branches, they discover that the wood they are burning has been hollowed out and filled with gold. This is ultimately what connects them to Rokurota, whose job it is to get the gold and the princess to safety. 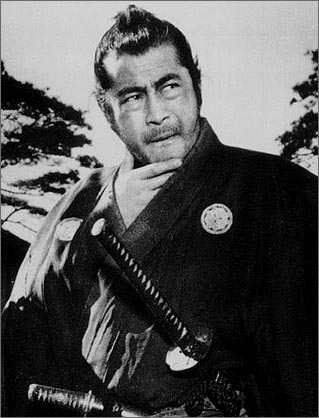 It seems that it’s impossible to mentioned the films of Akira Kurosawa without inevitably mentioning the films that he inspired. Just like Seven Samurai, Yojimbo also inspired a famous Western movie of the 1960s: Sergio Leone’s A Fistful of Dollars. I won’t get too into the plot, since this review is already getting long, but it’s a great story of manipulation.

Basically, Mifune Toshiro (yes, he’s back again in this one) plays a samurai who wanders into town and convinces the two rival crime bosses to both hire him as their protection. By doing this, the yojimbo (“bodyguard”) Sanjuro is able to make twice the pay for the same job. He then uses this position to pit the two gangs against each other and clean up the town. It’s an excellent story and if you at all enjoyed Clint Eastwood’s representation of “The Man with No Name”, you’ll know what to expect here.

Sanjuro, the following year’s sequel, follows the same nameless ronin (Sanjuro actually being a pseudonym describing the protagonist’s age) as he works to help a group of samurai clean up corruption among their clan’s officials. While I feel that Yojimbo offers the more satisfying tale, Sanjuro’s plot has much more complexity than the original. Both films feature Mifune at his best and he brings the character Sanjuro to life and a somewhat rude and yet compassionate swordsman. The shorter running times also make these two much easier to digest for viewers who may have been turned off by the 3.5 hours long Seven Samurai.

While this box set isn’t as classy as the Criterion Collection’s Akira Kurosawa set, it is a very nice set for these four samurai classics. The box the DVDs are packed in is sturdy and made from heavy duty cardboard and it has a simple yet stylish aesthetic that makes it perfect for any collector to show off. The individual DVD case don’t look quite as sleek, but they also don’t particularly offend, and they can always be tucked away inside the big black box for display purposes.

I found that the subtitles for these films were excellent. While I don’t speak Japanese and am therefore unable to state that they are 100% accurate, there were also no issues with nonsensical translations or broken Engrish. Unfortunately, the only bonus feature on the DVDs is the inclusion of a theatrical trailer for each film. While this is a nice inclusion so that film buffs can see how the movie was advertised during its original theatrical run, it would have been nice to perhaps include some commentaries. I don’t really feel that the set suffers for it though.

In the end, there is nothing that can be said about these films other than that they beg to be seen. All four are truly timeless classics that show Kurosawa’s mastery of his craft and his dedication to bringing his characters to life. Film buffs, Japanophiles, history majors, action junkies; these are all people who owe it to themselves to buy this box set and spend a spectacular weekend absorbing the way of the samurai. I typically try not to gush over movies I enjoy, but these films absolutely deserve every bit of praise. Do yourself a favor and go buy them today.