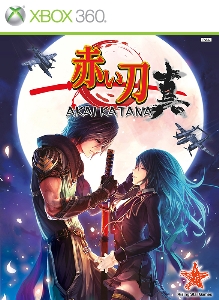 Cave Company is a video game company with a reputation for producing some of the finest 2D scrolling shooters (casually known as ‘shmups’ or ‘STG’), and still continue their support for the genre. Not too long ago they worked on a special shooter by the name of Akai Katana, which soon after its arcade release in Japan, was ported exclusively to the Japanese Xbox 360 as Akai Katana Shin. The Xbox 360 version was released in Japan almost a year ago and added a wealth of modes and features, but unfortunately for gamers in English speaking territories, the game was region-locked to Japanese and Asian Xbox 360 consoles.

Thankfully Rising Star Games took up the task to localize this awesome shooter for gamers in PAL territories and North America. Let’s not forget the excellent job that the company did in localizing another Cave shooter called DodonPachi Resurrection, which kept twitch heavy shooter fans satisfied.

Just recently Sine Mora (Xbox 360) was reviewed by yours truly, which to me was a landmark contribution to the evolution of 2D shooters as it combined traditional shooter conventions with unique gameplay mechanics, all integrated near flawlessly with modern gaming conventions in presentation, storytelling, and design. I still stand by the view that Sine Mora is perhaps the greatest ‘STG’ release of this console generation, but that doesn’t change the fact that Akai Katana is a brilliant and worthy addition to the Xbox 360 shooter library. 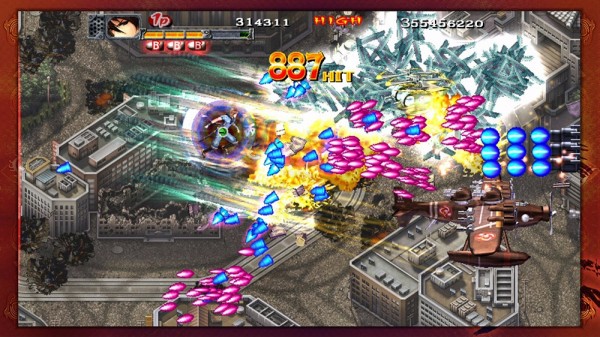 Akai Katana takes place in an alternate postmodern version of Japan’s Taisho period, an era of great economic and industrial development. A new type of resource is discovered that not only served as a very useful energy source, but also had mysterious magical powers that gave the government great military strength. However, with this mysterious power came great sacrifices and tyranny, and a small band of rebels rise to put an end to it. While Akai Katana isn’t meant to be a story driven game at all, if anything the story rarely gets mentioned during the course of the main game, but it’s still nice to have an interesting setting with an ending that’s actually quite compelling and bittersweet. 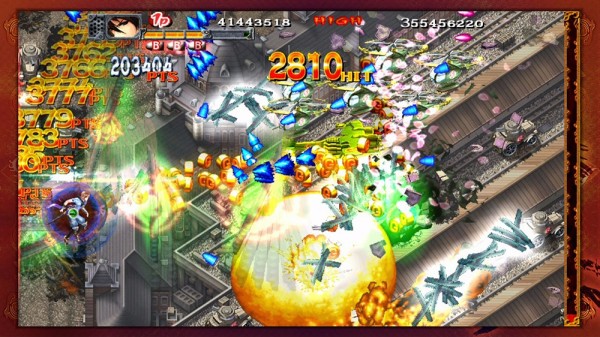 Akai Katana is a beautiful looking game, and the first thing that will catch your eye is the character art. This game has some gorgeous character designs that look really unique and refreshing, and they really have an air of beauty to them. Just the cover art alone will turn some heads, and some really cool designs for the main characters and bosses. The overall art direction of the game is very postmodern in nature, fusing very feudal Japan artistic intricacies with an industrial themed war setting. It’s a nice mix with a lot of style and personality.

Graphically this game is perhaps the best looking shooter that Cave Company has ever produced. Smooth and crisp traditional 2D sprites mix nicely with some light 3D elements. The backgrounds have plenty of detail and character, and the ship models look pretty slick. Unlike most sprite-based shooters by Cave, Akai Katana doesn’t look retro as it instead looks like a proper modern video game, not to mention they did a fantastic job in porting the arcade game to glorious HD resolution. It runs flawlessly and fluidly, even with the absolute chaos and cluster of enemies and projectiles occupying the screen. The game has plenty of eye candy in both the artwork and the chaotic in-game action, all backed by stellar presentation.

Musically this game is brilliant too, one of the more varied and emotional soundtracks to be produced for a Cave shooter. It’s catchy and energetic soundtrack mostly characterized by epic and aggressive guitar riffs, so it’s usually pretty rock-heavy. It does vary however, as you’ll notice hard techno and symphonic elements. There are mellow moments in the game, in particular the ending theme which is a hauntingly dark and beautiful track. It’s a great soundtrack overall, one that you’ll take notice of even amidst all the intense bullet hell action. 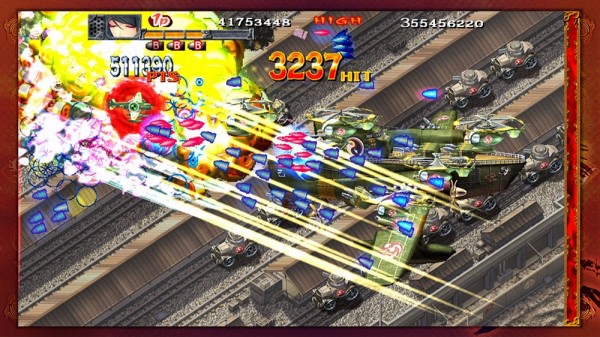 Akai Katana is a bullet hell shooter, the kind of chaotic bullet hell shooting action that only Cave can provide. Even as we see fresh ideas in the form of Radiant Silvergun, Ikaruga, and more recently, Sine Mora, there is just something about Cave shooters that pretty much distinguish it from all other offerings in the genre. In terms of gameplay, Akai Katana may not be the absolute best from Cave (that honour arguably belongs to the Japan only Xbox 360 release of Ketsui), but it’s still a thoroughly entertaining, challenging, and deep shooting experience that is easily among the best of the genre.

In Akai Katana you take control of one of three ships with each having a unique support character. Each ship offers a very distinct play style, and as such you’ll need to spend a good amount of time figuring out which ship works best for you. The ships mainly differ in terms of shot patterns, the way their support character behaves, and the way you can control their sub-weapon.

Mechanically Akai Katana is a very sound shooter, the ships have the normal shot which requires tapping of the button, and holding down the button will result in a more concentrated and powerful stream/beam of shots but will slow down the ship. Ships can also fire screen filling bombs. These mechanics are quite similar to what can be found in Cave’s own DodonPachi series of games. As such, Akai Katana does, at its core, feel similar to DodonPachi but the execution of those tested mechanics certainly do feel much different. 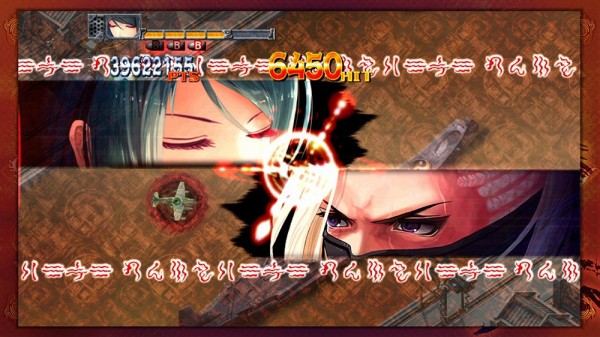 What’s interesting about Akai Katana is that while each ship is piloted by a main character, each one also has a support character that can be summoned during gameplay. These support characters have their own gauge which limits their usage, and when summoned they bring in a new set of attack styles and can help absorb some punishment for the main ship. It’s a nice little touch that adds a bit of layer to the shooting system. As mentioned earlier, each ship has a unique sub-weapon that also fires a stream of shots, and they can be controlled in a way that they can help you cover ground that your primary ship is unable to. It certainly helps make the action a bit more manageable.

In terms of actual game design, Akai Katana is similar to any other bullet hell shooter produced by Cave , where in each stage you go up against an onslaught of enemies and have to dodge and endure an equally overwhelming amount of colored projectiles. It’s a thoroughly intense and challenging experience, but ultimately satisfying and highly addictive. The bosses in the game are actually human Japanese warriors that are able to summon war machines, their designs are pretty cool and each offer an unique and intense challenge.

Akai Katana not only offers a perfect port of the original arcade game, but adds two new modes: Slash and Climax. Slash mode offers a different graphical resolution with a modified scoring system to lure high score addicts. Climax mode on the other hand offers the most challenging experience of all. These two modes offer enough reason for players to keep playing even after they have mastered the original arcade version, which in itself will keep them busy for a long time. The other features are what you’d expect from any home release of a Cave title, which includes training modes, score attack, replays, and leaderboards. This is a very well-produced and content/feature packed shooting package, and is easily the best arcade-to-home conversion that Cave has ever done. 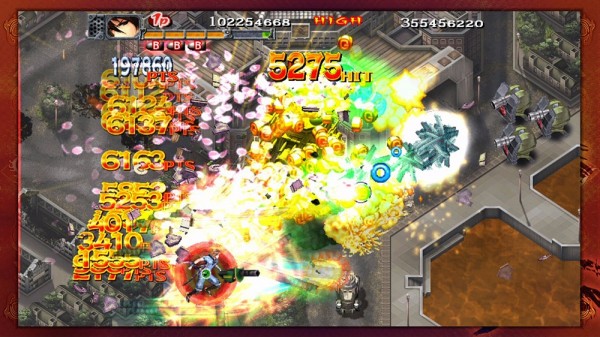 Akai Katana is a fantastic home conversion of one of the best shooters produced by Cave. The actual game itself is a fine example of how to make a superb scrolling shooter that has all the traditional elements that characterise the genre, but at the same time having the same demeanor and polish of a title that is modern and relevant. As a package it’s wonderfully produced and presented, and packed full of features and content to make it vastly re-playable. Akai Katana may not rewrite the book on bullet hell shooters the same way Sine Mora did, but it sure is a beautiful game in every regard, one that offers a highly polished gameplay experience that is both familiar and refreshing.