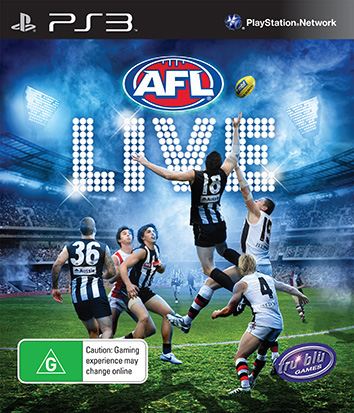 It’s been well over 4 years since AFL fans (yes there are still plenty of them nestled in the suburbs and city of Melbourne) have had something to look forward to in relation to a console release of their much beloved sport. While new titles of Soccer, basketball and hockey come out every year often with only minor differences, games such as AFL change dramatically in between titles as developers battle with difficult control systems to try and find ways to realistically represent the feel of the game on screen giving the player a greater interaction level. Personally I lump all previous AFL games I have ever played in with the likes of cricket, rugby league and rugby union, in the sense that most of them are bordering on unplayable due to shoddy and pre emptive controls that most often result in totally unrealistic scorelines. It’s very hard to recreate the feel of AFL which requires 36 players on field all the time and rules even a lot of Australians don’t understand.

AFL live is Melbourne based Big Ant Studios attempt to resurrect the most popular form of football in Australia and deliver fans a realistic style of gameplay, something that in my opinion has never been achieved before. So how does AFL live differ from its predecessors and does it live up to all the hype surrounding its release. Read on and decide for yourself. 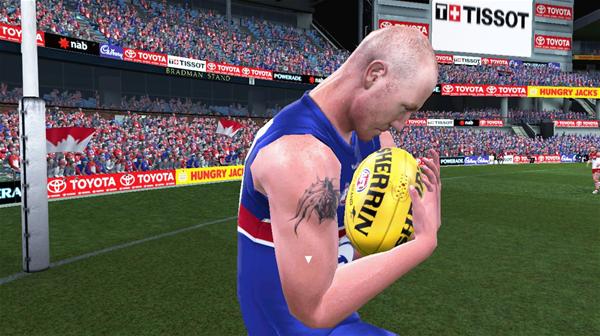 Initially I thought I was missing an icon on the title screen. I couldn’t find a career mode anywhere. Surely it was there somewhere but sadly it was nowhere to be found. Also absent was any type of manager mode, which has become standard in most sporting games these days as well as the ability to play through more than just one season. While the Wii version apparently has a few extra state level team additions, only the standard first grade league teams were available for use.

Initially the controls were very difficult to learn and it took a good 10 matches before my frustration levels dropped and I became comfortable with some of the more delicate controls. Gameplay is a fair bit quicker than anything previously before experienced, allowing players to quickly offload and create a string of handpasses to players close to them, more accurately representing real life play. In my first game I used Geelong (4.5/5 stars), and played the Gold Coast (2.5/5 stars), and was losing 66-0 at half time but after a while I was giving most teams a run for their money. 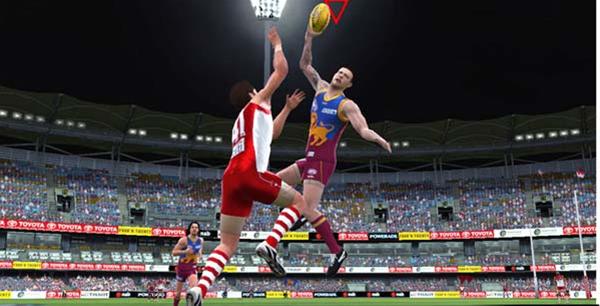 Remembering that this is their first attempt at an AFL game, there were some surprisingly welcome additions to AFL live that made gameplay much more enjoyable. Player movement is very realistic, especially during ball-up (when the umpire throws or bounces the ball), and their AI has been vastly improved. Players move to the ball rather than waiting in a set position and seem to much better follow directives. It is easy to pinpoint kicks with the lock button which creates a little circle around the recipient of the ball even denoting to the player how hard to hold down the kick button. All in all the level of accuracy in all facets of gameplay has been vastly improved by Big Ant Studios. This has resulted in a much more free flowing style of play, much more akin to the real thing.

Saying this there were a few inconsistencies with the game. Many times it felt more like NFL as teams went tackle for tackle with the ball changing hands each time. In many instances it was very hard to move away from a ruck or pack of players and create enough space in which to move. Due to the charge needed to get a decent length kick away it was too easy for opposition to shut down your plays unless you could find your way into a clear area. Many instances I got the ball after a heated struggle only to be tackled from behind mid kick or pass. The sprint button is a useful addition but in the majority of cases draws a penalty for not bouncing after only short use. It is much more useful as a defensive tool. The Auto-interchange feature was very much appreciated on my front, as I’ve never had the patience to bother changing tired and fatigued players. Although some of the changes were a bit dubious it made life a whole lot easier. Another impressive feature was the wide array of camera angles available. While I found the default setting a little confusing, the close up on ground angle was a winner in my opinion (although didn’t give much of an insight into where players were located off-screen), with developers providing an option to suit all. 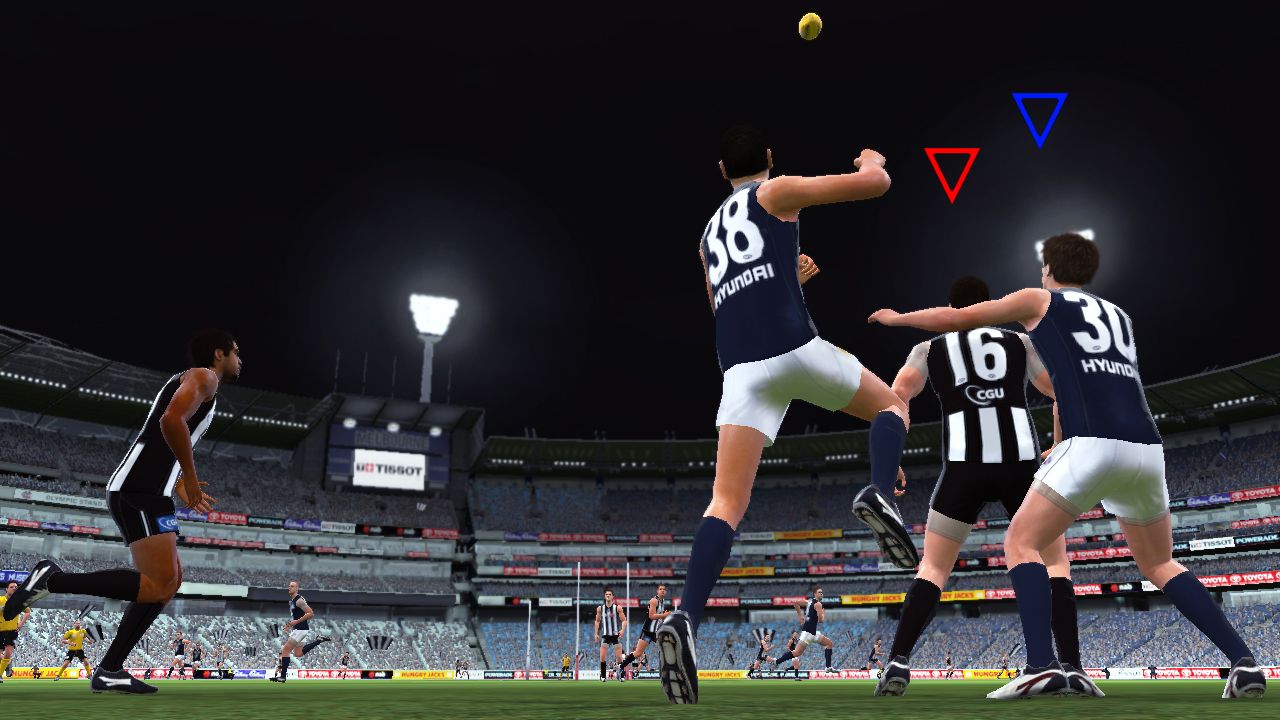 Another feature of in game play is the kick modifier button. While personally I would have preferred to simply have a button assigned to each style of kicking it did at least add another level to the game as players could successfully perform banana kicks and torpedos helping them to score hard goals. In relation to gameplay i would like to emphasise that the more you play this game the more realistic it seems to get. Perservere with the controls and learn the timing and importance of the right control stick in maintaining possession and control of the ball. Only once you work out the delicacy of the controls, can you fully appreciate the realism Big Ant Studios have achieved.

Visually there is a high element of realism to AFL live. For the most part players move with realistic fluidity, especially when jumping and punching balls when they are going for marks. There has clearly been a conscious effort made to render big name players to be very recognisable and Big Ant studios have done a very pleasing job in making AFL fans favourites come to life. The grounds are visually pleasing with nice shadowing and a realistic roughed up grass feel, as are the menus and option screens but nothing really to set it apart from other sporting games.

Most games in the sporting genre take great care in providing gamers with apt and funky tunes to listen to during loading, menus and other aspects not related to direct gameplay. Sadly AFL Live begins to sound like an IPod that is stuck playing the same 2 songs over and over. While Hunters and Collectors were a wise choice it couldn’t have been too much effort to provide a little more home grown variety.

Commentary was quite lacking in imagination with only a handful of pre programmed phrases thrown in. AFL crowds are a loud mix from families to diehard fans. Often fuelled by alcohol and pride they make no mistake when verbally supporting their prospective teams. This has unfortunately been overlooked by developers, with little to no crowd participation or interaction, no team chanting or singing all of which goes into making AFL what it is to its fans. It’s often said in Australia by those who don’t even particularly enjoy the game that it’s ok to watch on TV but unbelievable to watch live, which should have been incorporated into the matches.

Players are given the options to customise their own teams as well as customise the stats of already existing ones. There are a few discrepancies between players stats with many receiving much higher or lower scores than is justified by their game performances. Also there’s no option to take a custom team into the season which defeats the purpose of designing one short of online use. Fans of any sporting game would also expect to see a lot more statistics especially in relation to match summaries and players ongoing performance. The basics are their but they just haven’t been finetuned enough to really add anything of value to the title. 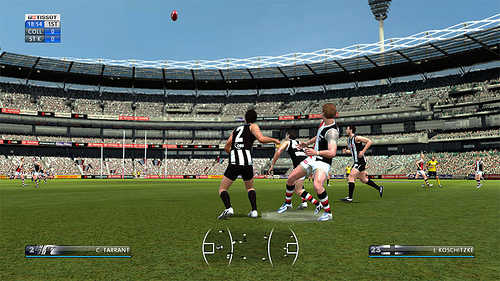 AFL Live has both an online and offline multiplayer element that I couldn’t test due to the PSN outage but I’m sure it would make for some heated battles and is where the custom teams would begin to shine. Judging from forums there has been many infamous matches and top players are well known amongst users.

Considering it’s their first attempt at an AFL game from a relatively small studio, AFL live has some very optimistic features that should serve as building blocks for the franchise. Gameplay is fluid and creates a sense of realism that is hampered by a frustrating control system that is hard to learn. Sporting fans in general would not be overly impressed by the lack of stats, music and atmosphere, but AFL fans will see a marked improvement over anything that has previously been released. Once you get a few passes together and start weaving and ducking through the opposition it is a truly pleasant experience and makes it stand out from the rest. The lack of a career mode may prompt many users to give it a miss as single player mode is somewhat limited in style and available teams to use. Saying that, Big Ant studios have finally managed to get the basics right and with a little fine tuning could turn this into a top selling series.