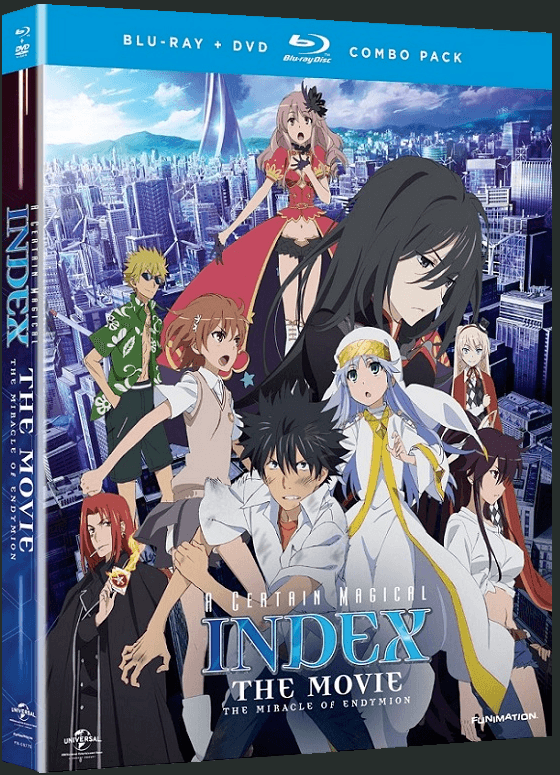 Overview
Very few series reach the level of success that A Certain Magical Index has managed to garner in Japan. This long running light novel series has received a number of different spin offs all while still having new novels published. As such it should come as no surprise that a movie featuring the characters from Index would be made and now FUNimation has released A Certain Magical Index – The Movie: The Miracle of Endymion in North America. Should fans of the series pick this film up?

Story
Now before I continue I should note that The Miracle of Endymion does require viewers to have previous experience with the series to really know what is going on as very little detail is given about existing characters, this includes those from A Certain Scientific Railgun.

Three years prior to the start of the film, an event called the “Miracle of 88” occurred. This event involved a space plane crash landing in Academy City but despite plummeting from orbit, 88 passengers and crew managed to walk away with very little injuries. Now sometime during the second season of A Certain Magical Index, the world’s first space elevator, dubbed Endymion, is about to celebrate its grand opening. 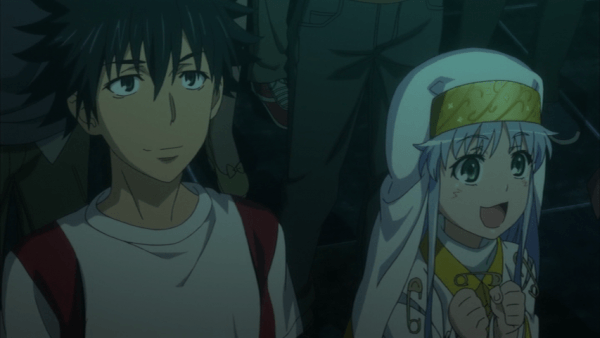 While Touma and Index are out, they come across a popular street musician named Arisa who is incredibly popular online and is seen as a rising idol. While meeting the pair, Arisa learns that she will be performing at Endymion to celebrate the opening. However after receiving this good news, Arisa, Touma, and Index are attacked by Stiyl and three new witches as the Church of England and the rest of the magic users begin to move on Arisa for unknown reasons. They are saved however by a newly introduced security group named the Black Crow, led by Shutaura.

When things calm down a bit, Touma and Index learn that Arisa was one of the survivors of the Miracle of 88 and also learn from Kanzaki that there is much more to the space elevator than simply science. In fact the entire structure is something from biblical times that can destroy the world if activated and it is up to the cast from both Index and Railgun to try and put a stop to Ladylee Tangleroad, the owner of Endymion, and her nefarious plans. 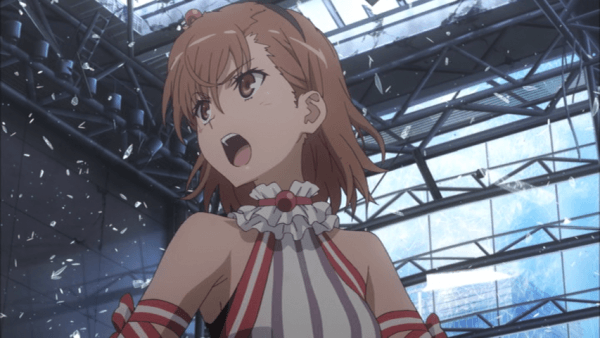 I started this review saying that anyone who hasn’t seen the Index and Railgun series will be lost and there is good reason for that. The film takes a showy approach to introduce the various magical elements that take place throughout the story all while explaining very little. Because of this, there it is really easy for even fans that know the series to miss out on some story points such as how Ladylee is immortal, Kanzaki’s abilities as a Saint, why Arisa is being targeted by the magicians, and even why she is being used in the first place by Ladylee as the film either poorly explains these points or requires specific knowledge from the two core series.

That being said, there is a lot here for fans of the show. Thanks to Kuroko being placed in a wheelchair it is easy to place the exact starting point for the series and practically every notable side-character makes an appearance in some form, even if it is only to drop one or two lines or show up to help destroy something during the last few minutes. This does become something of a problem for new characters however as viewers are given no information on Stiyl’s three assistants and more focus could have been given to exploring Shutaura’s ability as well as explain more of Ladylee’s motivations. 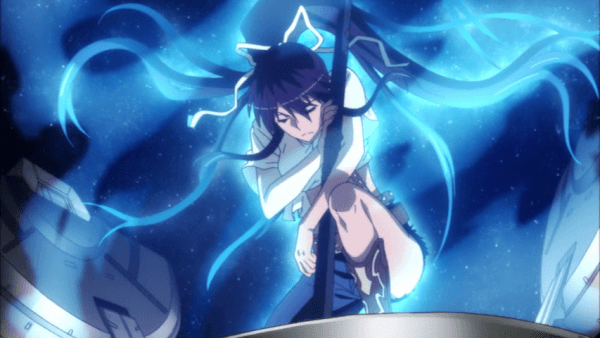 While the story may focus on Arisa and Ladylee, Touma, Stiyl, and Misaka are involved in most of the action sequences. It must be said that despite the large number of characters being shown in the film, it is disappointing that we see very little interaction between the two groups. None of the Railgun characters encounter Touma and the others while Index and Misaka barely interact. Even in combat the groups are split up to the point where the members of Academy City have no knowledge of who is actually helping them out. This does help give viewers different angles on what is happening, as Misaka and Academy City try to prevent the elevator from collapsing while Touma and the others try to stop Ladylee’s plans which is a nice touch.

Visuals
Although this is a movie, the overall quality of the animation and designs of the characters have not been given that significant of an improvement. The original cast looks as familiar as ever while the newly introduced characters have fitting designs but are generally unremarkable and the same can be said for most of the background scenery throughout the city, though the design of the stealth tank that appears in this film is impressive looking. 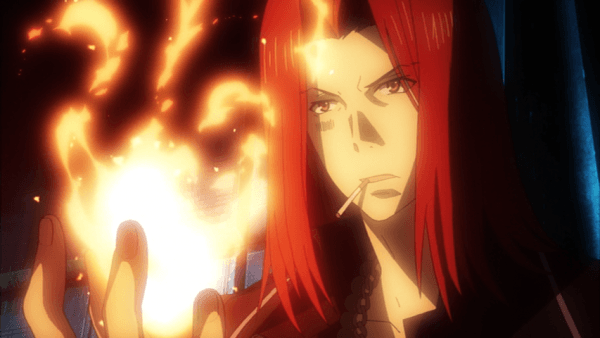 Where the film does shine is during the action sequences as there seems to be quite a lot of care put into keeping these scenes as fluid as possible despite the large amount of explosions that take place and the use of esper/magic abilities. The same can be said for the musical numbers involving Arisa performing on a stage, especially during the latter half of the film.

Audio
FUNimation has retained the original English voice actors from the two core series to reprise their roles in The Miracle of Endymion and they handle their characters perfectly. Where the English dub does have issues is with Arisa’s character. Arisa sings numerous songs throughout the film, including some background tracks, and unfortunately these songs have been dubbed in English and despite Megan Shipman’s best efforts, they sound far worse than the original Japanese songs. 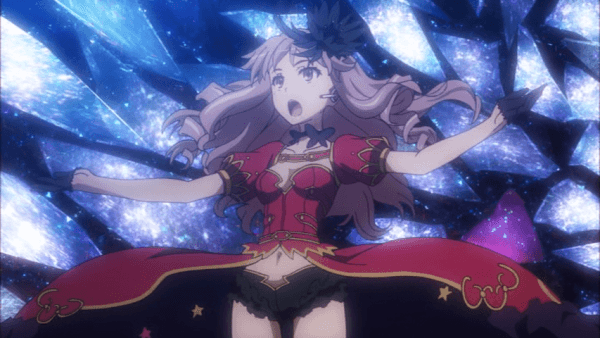 As for the basic soundtrack, viewers shouldn’t expect anything special here though I must recommend switching to the Japanese track during Arisa’s performances as they are splendid sounding. As for the main ending theme, “Fixed Star” by Mami Kawada, matches the same types of themes used during the Index series.

Extras
With their release of A Certain Magical Index – The Movie: The Miracle of Endymion, FUNimation has included a number of on-disc bonuses though some of them are fairly standard. Various Japanese trailers and promotional videos are included as well as the English trailer for the film and trailers for other FUNimation anime alongside an English commentary track. 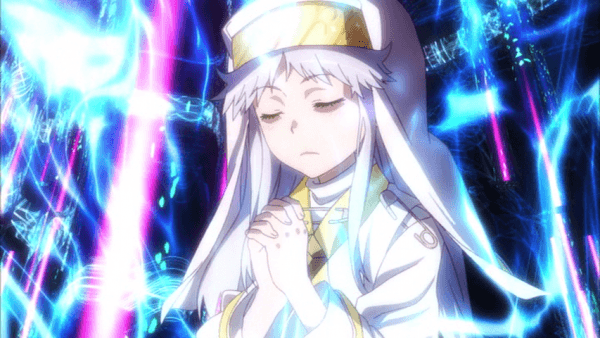 This commentary track runs throughout the entire movie and features Micah Solusod (Touma), Monica Rial (Index), Megan Shipman (Arisa), and Whitney Rodgers (Shutaura). The commentary mostly involves the group discussing the film as it plays but also gives us details about their work on the series while highlighting how Megan and Whitney are fresh faces around the anime scene.

Overall
Despite its flaws, A Certain Magical Index -The Movie: The Miracle of Endymion does turn out to be a rather enjoyable film for fans of the series, but one with such a high level of entry it may require someone to watch more than once to pick up on everything and even then there is still plenty left unexplained. These fans will be able to enjoy seeing the Index and Railgun casts once more, though they shouldn’t expect anything memorable from The Miracle of Endymion.