Who doesn’t love taking on the gangs of the seedy underworld? Whether it is as an undercover cop, or a gang member. And hey, 9MM is neither and both at the same time, with John ‘Loose’ Kannon who is a corrupt narcotics detective and who kills a drug lord’s brother and steals millions of dollars. Now here are a few questions from me, firstly, does anyone just call him ‘Loose’? Because personally, my feelings would be a little hurt if my nickname was loose. Secondly, why not kill the drug dealer? Surely he has more money, and that would be kind of helping out your buddies in blue. Third of all, has anyone counted how many times swearing occurs in this game? Because it’s actually pretty impressive how many swear words they manage to get into it. Fourth of all, this game resembles both GTA and Max Payne, so which side will it fall on?

My last question is the easiest to answer, which is unsurprising since it is the least sarcastic one. While it does ring reminiscent of GTA, it definitely follows Max Payne far more. Instead of having a sandbox that you can wander around in, you have to keep to a certain area and follow the line that the game likes you to follow. If you try to deviate from this set path a message will pop up on the screen, the game scolding you and shooing you back onto the path as if you’re some wayward Kindergartener. 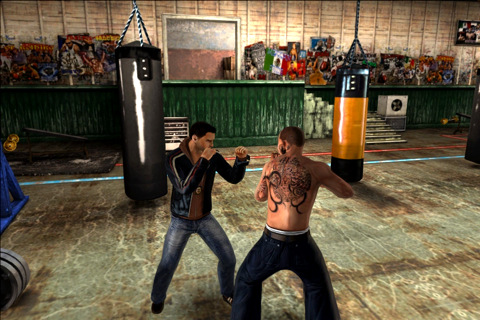 While the app brags of destructible environments, most of them aren’t. Bottles, boxes and speakers are, but apart from that you won’t get the pleasure of wreaking destruction as much as you would in other games, which is a bit of a shame. It would have definitely added to my fun factor if I’d been able to smash a few more things while being all renegade badass. 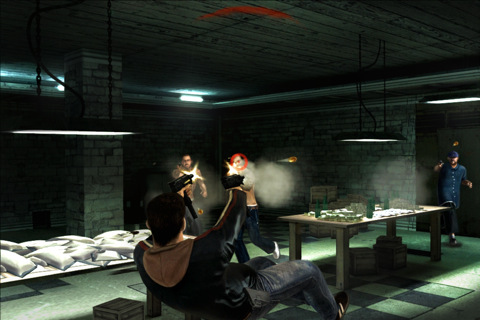 There are a couple of quick-time events that will pop up, so make sure that you don’t tune out too much during the cutscenes, because you might end up missing something you need to do. Other than that the controls are fairly standard, and don’t cause too much trouble. Similar to Max Payne, you can enter slow-motion ‘bullet time’ to take out a group of gangsters, pinpointing each one and wiping them out as quickly as possible, which is invaluable in parts of the game. The slo-mo bar is charged by kills or simply letting time pass, so using it for one or two people is a bit of a waste. 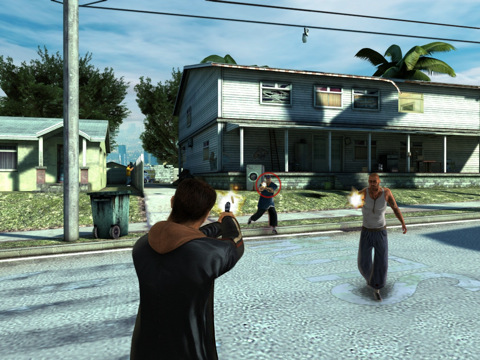 There is in game cash with which you can buy armour, ammo, so on and so forth. You can either earn this with level completion, kills and achievements, or go for the in-app purchase option. However, you don’t really need to, unless you want all the best things absolutely right this second so that the game isn’t hard at all and you can own absolutely everyone with a glance. That’s up to personal preference I guess.

There are 12 levels in single player campaign, with about 3 gameplay hours in them, and once you’ve completed the campaign you can try harder difficulties or have a go at the multi-player.

Multi-player involves either death-match or team death-match modes, with up to 12 players either over Wi-Fi or online, or two players via Bluetooth. To play online you have to have a Gameloft Live account, which is free, and you play through the Gameloft servers. There is definitely lag in the multi-player mode, however, so if you are someone who can’t deal with jerkiness during gameplay then you should perhaps look elsewhere.

The grittiness of the culture that 9mm is set in is reflected in the visuals. I mean, there are strippers guys. 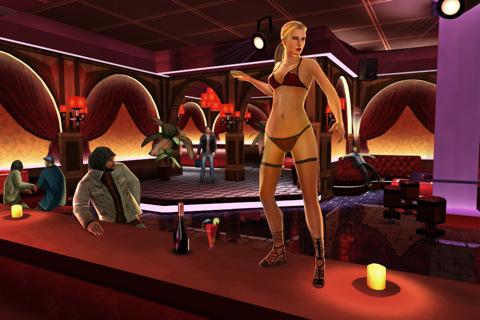 When I started playing on an older laptop the graphics were completely unplayable, only some of the background would actually show, and nothing else, however this was my fault as the laptop had clearly just freaked out a bit over the graphics requirements. Or perhaps it was self-censoring. Either way, once I traded up it fixed itself up. Apart from some glitches, which drove me up the wall a bit (I have a low tolerance for glitches), the graphics were pretty good considering it is technically an app.

The soundtrack makes me feel like I’m stuck in a car with a bunch of guys who think that they’re super hardcore and ‘gangsta’. Which makes me feel a little awkward because I’m far from that and I opted to turn my volume down so that others didn’t think that this was the sort of music I listen to while I’m on my laptop.

The voiceovers are alright. They aren’t great, and at times they are quite heavily stereotypical, but that sort of lends itself a little to the game. Why play as a crook cop if you aren’t going to go all out stereotypical, with choice cheesy lines and accents and all.

If you’re a fan of Max Payne this is definitely a game to get. Sure, it’s the watered down, app version but that doesn’t take away from the entertainment or fun of the game itself. It certainly is enjoyable in single-player mode, and as long as your laptop can deal with it, it plays well.