Arboria is a 3D rogue-lite action RPG. Players take on the role of a Yotunz warrior sent down to the depths of Durnar to save their village. The game emphasizes challenging skill-based combat that requires players to be flexible, adjusting tactics to reflect the enemy’s strengths and weaknesses. The game has just landed on Steam Early Access with a full launch expected in 2021.

Arboria is very much an early access that follows the original spirit of the program. It is nowhere near done. The basic gameplay loop is there, but a good chunk of audio/visual assets and playable content is missing. While it is far from a complete game, there is enough content to give players a very good idea of what sort of game Arboria is shaping up to be, and there’s plenty to be excited about.

The story behind Arboria is interesting so far. Players are chasing a fellow member of their tribe down into the depths of Durnar. The world is overgrown with plant life that has slowly consumed the remains of some lost high-tech society. There are a lot of lore questions to be answered and some good opportunity for some twists and turns. So far, it seems like the plot will be pushed forward between dungeon floors through short messages left by previous travellers.

Arboria offers challenging combat in the vein of The Surge and Dark Souls. Enemies are tough, and the players are squishy. Survival is reliant on a combination of evading enemy attack patterns, exploiting enemy weaknesses, finding better equipment quickly, and improving the permanent stats over time. Equipment is mostly scavenged from the depths of Durnar and are lost on death, making the early game very tricky. Weaknesses are generally in the form of attack patterns and elemental weaknesses. As the game progresses, players are able to purchase second slots for weapons that will allow them to switch to the best combination before engaging in a fight. Being able to exploit weaknesses is a big part of staying alive as players traverse deeper into the level.

The game sticks to the tried and true formula for rogue-lite games. Players will deal with randomly generated dungeons and character perma-death. As of publishing, there is only one setting with more in development. Map generation is decent so far but still needs some tuning before launch as some pointlessly long dead ends appear on occasion. While perma-death is a thing, players have access to an unlimited number of Yotunz warrior, so losing one is not a huge concern. After each death, players are simply prompted to choose from a pool of randomly generated heroes to take into their next attempt.

There are two main progression currencies. One unlocks new buildings and permanent upgrades for the player, while the other is split between paying for permanent upgrades and gambling for better rolls on the next set of randomly generated warriors. For what content there is now, currency progression feels like it is at a good place, with just enough sinks to prod the player forward.

The controls feel decent right now, though there is room for improvement. Options for rebinding the keyboard is missing and needs to be addressed soon. The controller layout should be familiar with those who played the God of War reboot. Everything is laid out logically, so those who are more used to the traditional hack and slash layout will be able to convert over after a short period of time. The only problem with the controller right now is targeting enemies with directional attacks. The game tends to be very fussy in terms of direction, so a light aim assist would be appreciated.

The graphical experience is unique to say the least. The art style will be a love it or hate it deal with its plant and troll inspired aesthetics. The animations are decent so far, though there are too many unnecessary cutscenes that could be skipped over in favour of a flat load screen and plain menus. The size of the partner is a bit large right now as she can get in the way at times. Shrinking her by 50% would be helpful for combat.

The sound experience is a work in progress. The sound effects are decent so far, but there are missing effects outside of combat. There is no voice acting. Considering the thick accents used in the game dialogue, I would prefer if the developers kept it this way unless they are able to snag an incredibly talented cast of voice actors.

Arboria is still in its early stages of development but offers a solid foundation for the developers to build upon. The combat is a fun challenge that rewards careful timing and thoughtful exploitation of enemy weaknesses. The gameplay loop has lots of room for player to improve their own skills and their characters in the course of progression. While the presentation won’t be for everyone, the art team should be applauded for a bold style. Arboria is not one of those extended beta Steam Early Access titles, so jumping into the game now might not be for everyone. Regardless, fans of challenging action games should follow Arboria on Steam and watch how the game progresses over the coming months. 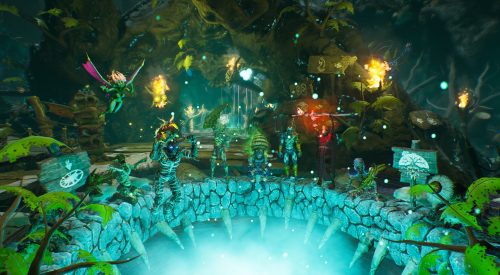