A new trailer for Pokemon Sun and Moon has been released and this is the most exciting one yet, revealing new Alolan forms for a few classic Pokemon, several new Generation 7 Pokemon and heaps of awesome new features as well. This article will break down all this new information including a lot of details that were expanded upon after the trailer had been released. If you want to watch it for yourself the new footage is embedded directly below.

So first off, new forms of old Pokemon. Due to the different mini climates in the new Alola region some already known about Pokemon have taken on completely different characteristics affecting their physical appearance, types, abilities and most likely their base stats. I saw most likely in regard to the stats as the official site mentions Alolan Sandslash is slower than it’s normal counterpart due to it’s increased weight. So far five Alolan Pokemon have been revealed. 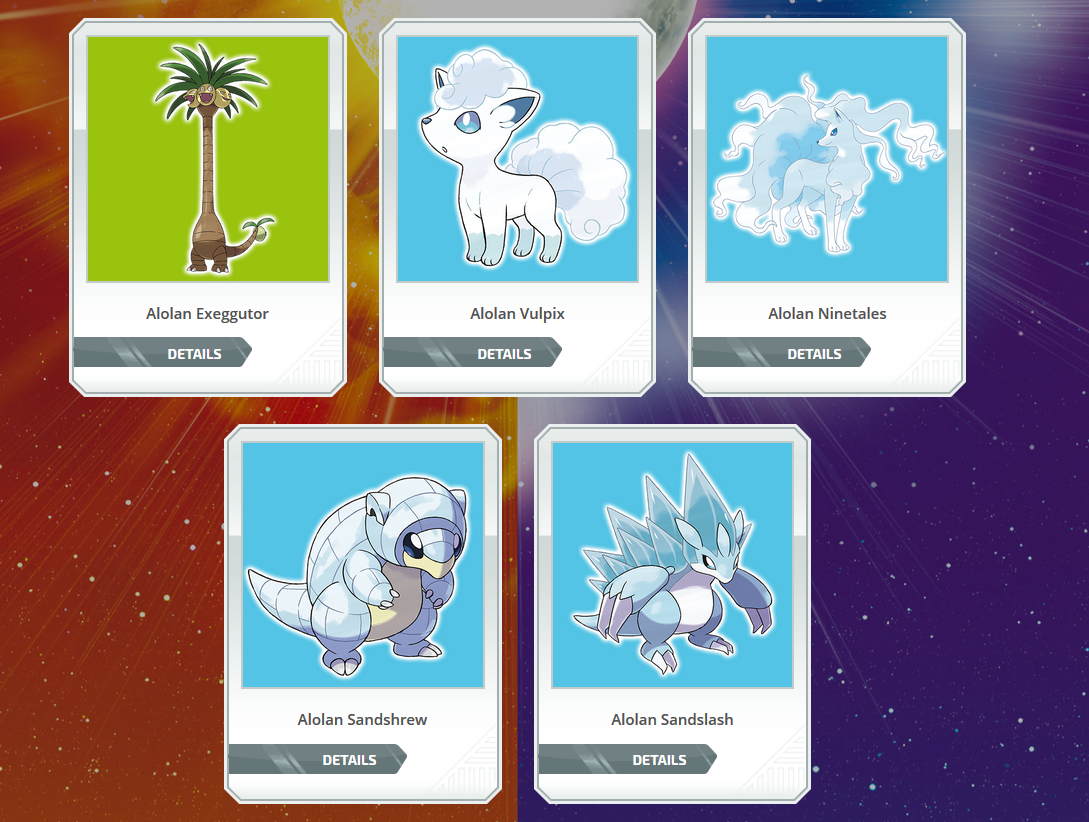 Alolan Exxegutor is perhaps the most radically different in terms of looks. It’s type changed from Grass/Psychic to Grass/Dragon and it has the Frisk ability. Alolan Vulpix and Ninetales both go from Fire types to Ice and Ice/Fairy types respectively. They have the ability Snow Cloak which gives them extra evasion in a hail storm. Alolan Sandshew and Sandslash also gain this ability and a new Ice/Steel typing as opposed to their original Ground forms. 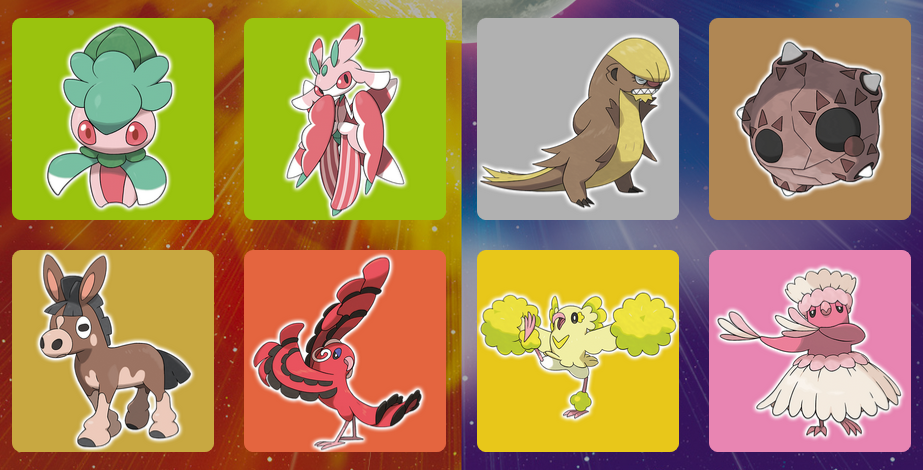 Now I’ll introduce you to some all new Pokemon. Starting from the top left we have Fomantis and it’s evolution Lurantis. They are both Grass types and learn an all new move called Solar Blade, which seems to be a physical version of Solar Beam, including the turn it takes to charge up. They get the Leaf Guard ability to protect them from status effects in the sun. Third from the left is Yungoos new evolved form, Gumshoos. It retains it’s Normal typing and Stakeout and Strong Jaw abilities.

Top right corner is Minior, a Rock/Flying type. It has an interesting abilitiy called Shields Down which give it excellent defensive capabilities until it’s HP drops to below half, where it will change into a more offensive form. Bottom left corner is Mudbray, the pre-evolution of the formerly revealed Mudsdale.

Then there is Oricorio, a Flying Pokemon that has a unique secondary typing for each of it’s styles. From left to right, Fire, Electric, Psychic and Ghost. Oricorio has the new Dancer Ability that will copy any dancing move used by another Pokemon such as Swords Dance or Quiver Dance, and give Oricorio those effects. It also get’s the new move Revelation Dance that’s type changes based on Oricorio’s current style. A different style of Oricorio is present on each of the four islands of Alola due to the Pokemon drinking nectar from specific flowers. It should be able to change forms by visiting the different islands although is currently unconfirmed. 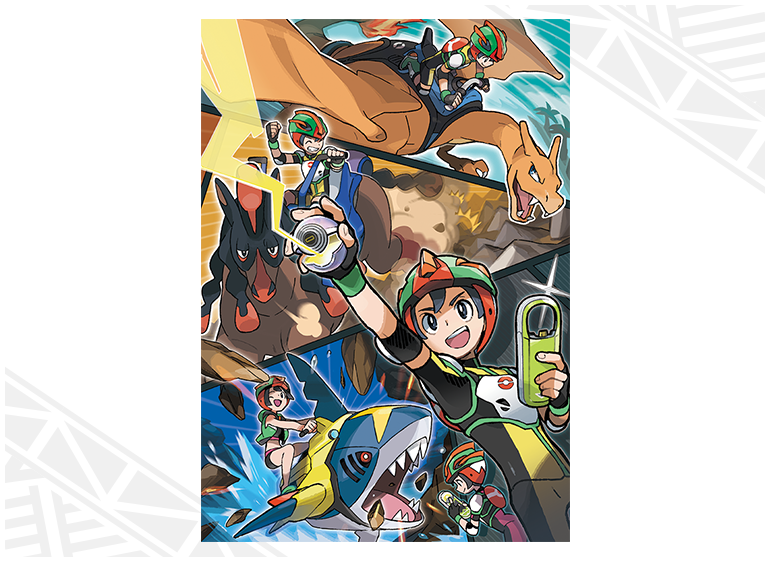 Now it’s time for some awesome new features. Poke Ride will allow you to fly on a Charizard, ride a Tauros or surf on a Sharpedo. Don’t quote me on this, but it seems Poke Ride is a way to replace HM’s such as Fly or Surf with a funner alternative. It is said that Poke Ride Pokemon don’t join your team, so you simply call for someone else’s Pokemon as opposed to flying on your own Charizard. Other confirmed ridable Pokemon include Tauros, Stoutland, Lapras and Mudsdale. 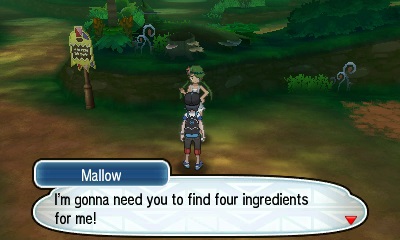 Pokemon Sun and Moon seem to feature a slightly different progression system than the past games. It seems the new games won’t have traditional Gyms and instead has something called the Island Challenge. There are four main islands in Alola and it seems you must pass the trial on each one before you can continue to the next. Each trial seems to put you up against a Trial Captain, a challenging Totem Pokemon battle and lastly, a battle against the islands Kahuna.

The first trial of each island is not limited to simply battling with Pokémon. They take a variety of forms, such as finding items or completing tests of knowledge. After you have completed that you will have to take down that islands Totem Pokemon. The first one you challenge will be a Totem Gumshoos. A Totem Pokemon can summon allies in battles, turning it into a one sided affair. They also are surrounded by a unique aura which will power them up in different ways, Gumshoos get’s a defense boost for example. 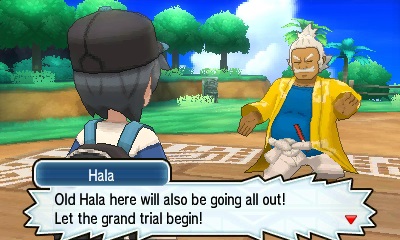 Lastly, you will battle the islands kahuna. Each of Alola’s four islands has a leader, called the island kahuna, who governs the island. Kahunas are chosen by the Pokémon known as guardian deities, which are also found on each island. Hala is the kahuna of Melemele Island, where you have just moved to, and is also your rival Hau’s grandfather. He is also the person who gives you your first Pokemon. 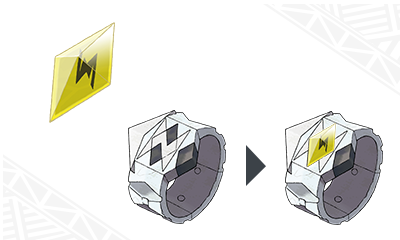 The final big announcement was the newest additional to the Pokemon battle system, Z-moves. This is what the dances in the last trailer were related to. These are ultra powerful moves that can only be unleashed once per battle (as in only one Z-move per battle total) and there is a Z-move for each Pokemon type. To use a Z-move you first must obtain the Z-Ring which fits on a Trainer’s arm, and one of 18 Z-Crystals (one to match each type). If a Pokémon holds the same variety of Z-Crystal and has a move of that type in it’s current moveset, the two will be able to resonate with one another and unleash a devastating Z-move. Currently we have seen, Bloom Doom, Gigavolt Havoc, Inferno Overdrive and Hydro Vortex, all which look absolutely devastating. 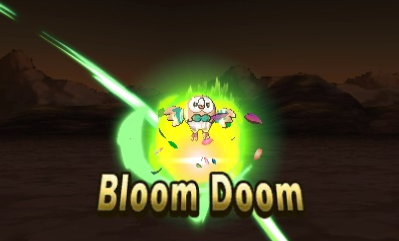 Surprisingly we haven’t seen anything about Mega Evolution so it could be this new feature could be replacing Mega Evolution all together but that is purely speculative for now. Toy company Tomy are releasing a real life Z-Ring which players can wear on their arm. The accessory will be released alongside Pokemon Sun and Moon and will light up, vibrate, and play sounds to go along with the video and sounds in the game. 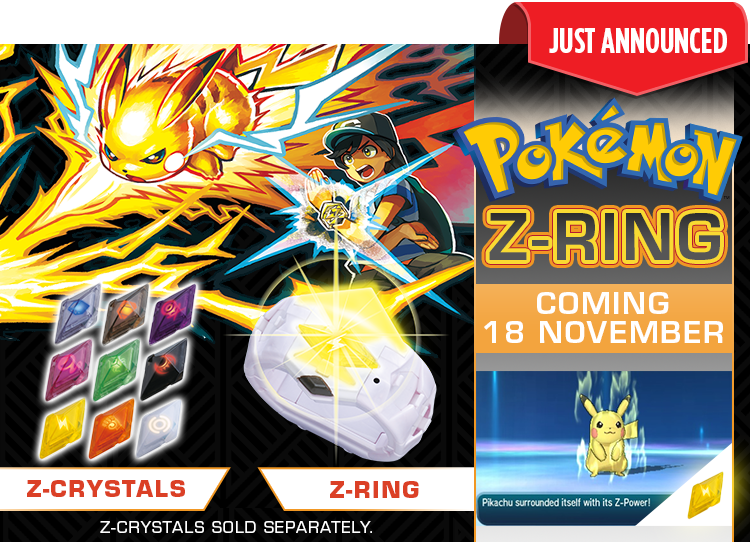 UPDATE: EB Games Australia has listed the Z-Ring accessory and Z-Crystals for preorder. The Z-Ring will set you back $38AU and comes with 3 Z-Crystals, Grass, Water and Fire. It also comes with a 5cm Pikachu figure. Additional 3 Z-Crystal packs are available at $10 each and contain different types.

That’s everything new we learned in today’s trailer but surprisingly the Pokemon Company have already announced that the next big information dump will take place in only a couple of weeks time on August 12th at 11:00PM AEST. Pokemon Sun and Pokemon Moon release exclusively on the Nintendo 3DS in most regions worldwide on November 18th.