Pokemon GO is a lot closer to release than many believed with late July 2016 being the aimed for release date announced at a recent live play event at Nintendo’s E3 Treehouse. It was noted this is when the game is aiming to be released and it may have to be pushed back if problems arise. We also got our first look at direct feed official gameplay, right from the developers themselves which revealed some interesting new information as well as some laughs, such as this picture of one of the developers dogs vsin g a Nidorino. 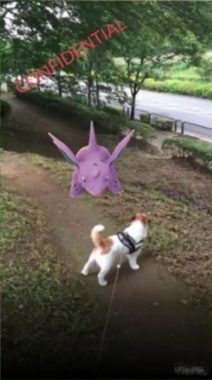 You can watch the footage in whole below but we’ve neatly listed all the highlights for you from that footage below.

Be sure to check out all our previous Pokemon GO! reports to see all the news we have collected over the last year, including how battles and gyms will work.