Abstraction Games and Jaywalkers Interactive’ Stylized Platformer Out Now on Xbox One, Wii U™ and PlayStation®4

Valkenswaard, The Netherlands – June 3, 2016 – Independent publisher Abstraction Games and developer Jaywalkers Interactive are pleased to announce that their exciting new physics-platformer, Kick & Fennick (winner of the Dutch Game Award for Best Entertainment Game Design – and Best Core Entertainment Game Nominee), is now available on Xbox One, the all-in-one games and entertainment system from Microsoft, Wii U™, and PlayStation®4 computer entertainment system. Kick & Fennick is an action-filled adventure about Kick, a young boy who’s battling to help his robot companion Fennick. Join them as they blast, bounce and bound their way through 45 challenging levels. Adding a unique twist to the gameplay – Kick’s gun not only blasts baddies, but its recoil can be used to launch the lad into and through many exciting levels and obstacles! Puzzles, platforms, and power-ups await in Kick & Fennick. 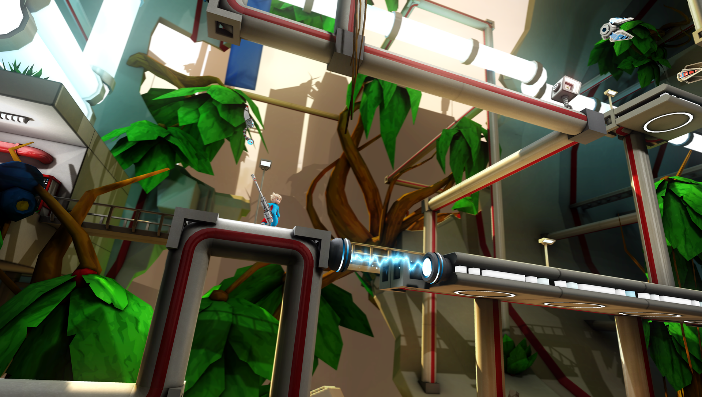 Kick & Fennick tells the story of a young boy named Kick who finds himself waking up in a bright and colorful, yet dangerous world. Besides shooting down enemy robots, Kick can make huge jumps by using his gun’s powerful recoil. Together they must explore this strange new world, jumping and shooting their way through 45 levels of collapsed skyscrapers, treadmills, bounce-pads, magnets, teleporters, and a big guard robot that are out to stop Kick at all costs!

Key features of Kick & Fennick include:

●     Players take on the role of Kick and must use a combination of jumping and blasting to navigate all 45 levels and find their way to the Core Tower to save Fennick!

●     Marvel at the brightly colored world of Kick & Fennick, with inspired character design, intricate and delightfully chaotic levels, highly-detailed animations, and a cinematic camera system that dynamically follows all of the action.

●     Kick & Fennick offers up challenging platforming adventures and puzzles that will keep gamers of all ages and skill levels engaged without throwing their controller in frustration.

Abstraction successfully bridges the gap between the major AAA publishers and the small, bootstrapped independent development teams. As it is essentially an independent development studio, Abstraction is plugged into the indie scene and knows which games and developers are worth paying attention to. Abstraction has strong publisher and first party relationships from its history of working on large adaptations, such as Angry Birds and Hotline Miami. With several major adaptations under its belt, Abstraction Games looks to continue to establish itself as a leader in the space, while also working on their own projects and games in the near future. For more information, please visit abstractiongames.com and follow them on Twitter at @AbstractionGame.