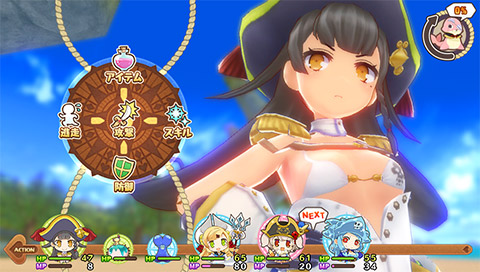 Today Compile Heart has released the first full length trailer for their upcoming PS Vita RPG Genkai Tokki: Seven Pirates and alongside this nearly four minute long video they have also released a few details about the game’s various systems. As you’ll see in the video below, players will be able to explore dungeons and find various treasure chests and items that appear as glitters on the ground while combat will take place in turn-based style with four party members battling at a time.

The final feature shown off is the “Chest Growth” mechanic. By using this system, players will be able to increase a character’s stats, improve their skill acquisition, and change the appearance of a girl’s chest. This means by performing various actions such as poking, pulling, rubbing, etc. the character’s stats will improve and the shape and design of their chest will also change.