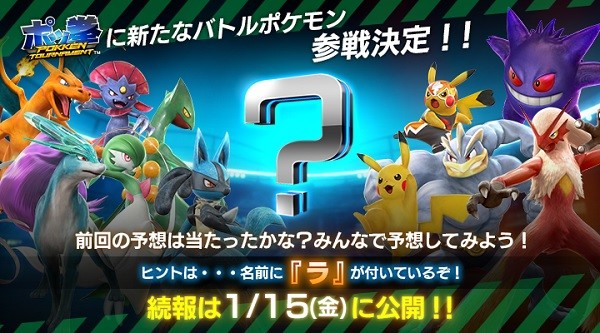 Last month Nintendo and Bandai Namco held a little teaser stating that they would reveal a new Pokemon for Pokken Tournament and at that time they announced that Sceptile would be joining the roster. Now they are doing yet another teaser in the same form as the companies have released another new teaser for Pokken Tournament stating that a new playable Pokemon will be revealed on January 15th.

The teaser this time is only hinting that the Pokemon’s name in Japanese will contain the character “ラ” which works as either “ra” or “la” meaning that it covers well over a hundred different Pokemon, including many fighting types, so it will be very interesting to see just which one it will be once January 15th rolls around.