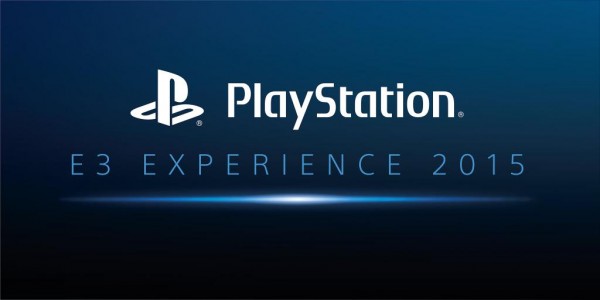 Welcome to Capsule Computers live (or semi-live) recap of events with the 2015 E3 showing for Sony. Below are the announcements as they occur with a bit of opinion layered on top and some screenshots and trailers for your enjoyment. Let’s see what Sony brought to the table this year!

And we begin with a montage of a good mix of PlayStation exclusives and third party highlights. Big cheers for the crowds they are really hyped for this one. This first game is said to be long anticipated. It can’t be. The Last Guardian! Wow! Finally! 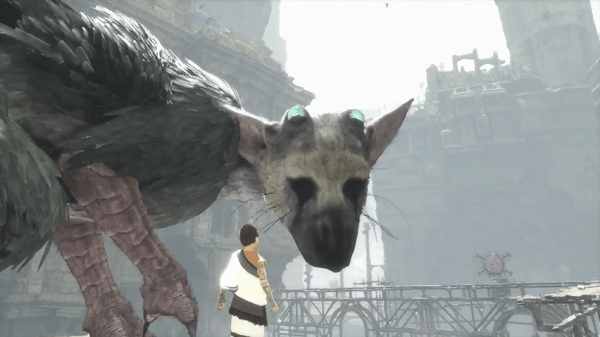 The world looks great as a young boy searches around some ruins. There’s the big beast and the boy gives him a hug. The beast can be called over and help you survive big leaps by grabbing your arm as you nearly fall to your death. The beast seems to be scared of this dream catcher thing so the boy moves it. The partnership between these two will be very integral to the games core gameplay. I’m not sure if this is scripted but if it’s not the collapsing ruins and all are very impressive. The beast scratches behinds it ears like a dog and we finally get a 2016 release date, but I don’t know if we can trust that. Shuhei Yoshida takes the stage to introduce the creative director of The Last Guardian as the crowd continues cheering.

A brand new franchise is being announced. Herman Hulst from Guerilla Games takes the stage. The new franchise is a PS4 exclusive and is called Horizon: Zero Dawn. A girl is narrating. It seems to be set in a post apocalyptic world where humans have long died off and nature has reclaimed the earth. Main character seems to be a female tribeswoman stuck in a ware between man and machine. The trailer switches to gameplay as a girl hides from a robot dinosaur. Kind of reminds me of the Witcher 3 crossed with Monster Hunter crossed with a whole heap of other games. The girl ties the beast down by firing ropes at it and pinning it to the ground before going in for the big kill. No release date yet but this has definitely caught my eye as a great new IP.

Square Enix now. The new Hitman that leaked a few days ago is being shown. Not much to say a lot of running interwoven with a shady night club scene. Seems the game is just called Hitman and now Asad Quizilbash takes the stage to talk about it. It seems to be a reboot and will be launching on both consoles and PC but Sony seems to have a exclusive console beta deal and six unique contracts only on the PS4. The game launches December 8th.

Now it’s time for Street Fighter V. Birdie from Street Fighter Alpha is shown and now Cammy is also revealed! Good to see anther fan favourite in the mix. Again PlayStation fans exclusively get to experience a Beta on July 23rd. Street Fighter V is coming out on PC and PS4 in March 2016.

Sean Murray from Hello games takes the stage to talk about No Man’s Sky. Sony’s premiere indie. Looks like were going to get some good play here. Sean commentates that there is a warring faction going on and you can join sides or leave it completely or even take on both. He then zooms out to reveal just how big this world really is and then zooms out again. There literally looks to be a million planets you can visit it’s pretty impressive. He states every player is trying to get to the center of the galaxy and then warps to a random planet called Keyti. You can scan a planet to bring up points of interest then fly into the atmosphere to visit it. Each planet is fully explorable. You can fully destroy all objects on a planet and sentinels roam around to help stop that but you can destroy them too. You can go underwater and add fish to your logbook. It seems you have to find an upload beacon first to upload any data you find. Pretty cool. Still no release date though. 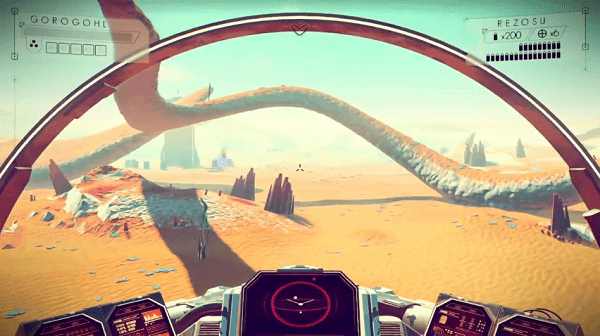 About half an hour in and now it’s time for another exclusive. A game about creating things by Media Molecule who of course are famous for Little Big Planet. The game is called Dreams. Guy is going on a bit about dreams and creativity etc. They have really simplified everything, maybe a bit too much. You move your controller to draw things and can animate them, all done with the motion controller. A guy playing piano, a polar bear, a space chase scene seems to be some of the dreams you can create. Just watch the trailer for this one it’s hard to explain.

Now for an intense mystery set in the wilderness. Fire Watch will be making it’s console debut on PlayStation. Seems to be a survival open world game where you have a girl radioing in constantly while you try to solve a mystery.

Now it’s Destiny time. The next great adventure as it was called on stage seems to be a big expansion pack. Not much to say here looks like classic Destiny. The expansion is called The Taken King and will bring with it new story content and supers. The expansion releases on the 15th of September 2015.

Assassin’s Creed Syndicate is getting more some time now. Showing Evie in action and some cool new weapons like the throwing knives. More exclusive deals where you will get to play some exclusive missions.

Final Fantasy is getting a new addition in a chibi styled game. Seems to bring together heroes from some old Final Fantasy titles. The game is simply called World of Final Fantasy and is releasing on PS4 and Vita in 2016. Finally some Vita love.

That’s not all the Final Fantasy love though. Could this be. It’s happening! A Final Fantasy VII remake! All new, next gen graphics. Finally a remake we can get around. There’s Cloud’s Sword. The word remake is flashed on screen and we don’t get a title or anything but we all know what it is! Coming first to PlayStation 4 but doesn’t seem to be exclusive.

Four new games from Devolver Digital. All indie games by the looks of it. Ronin, Eitr, Mother Russia Bleeds and Crossing Souls, all making their PS4 debut.

Wow Sony are delivering. Shenmue 3 is coming through Kickstarter! A true sequel to the first and second game. It looks and sounds great. The Kickstarter page seems to be live already and heres the link. The crowd are stoked! We are sure that this will have no problem getting funded. It will be coming to PC and PS4 and as of time of writing the Kickstarter is already at 900K! 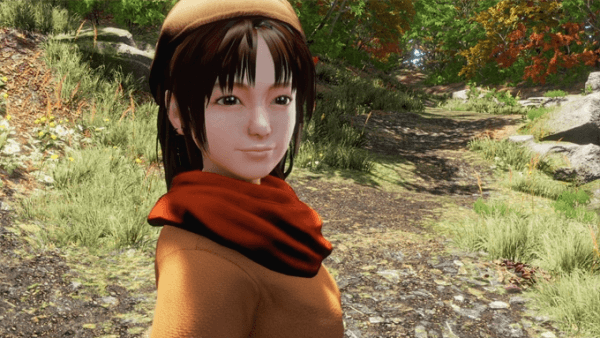 Batman: Arkham Knight getting some love now. Spoilers big time for anyone who hasn’t played the other Arkham titles so I’ll let you watch the trailer at your own discretion. Seems they are showing off the exclusive Scarecrow fear missions. Looks very brutal and horrific.

Andrew House, President of Sony Computer Entertainment out now to talk about Project Morpheus. Doesn’t really say anything new though. A new IP called Rigs is coming out that is a virtual reality three man team FPS. Morpheus will be playable on the show floor. Showing off how PlayStation Music was the fastest downloaded PlayStation App. PlayStation Vue seems to be a TV service exclusive to America. It’s some sort of subscription service where you can subscribe to single channels if you wish.

PlayStation is partnering with Activision for what else than Call of Duty Black Ops III. Apparently they don’t have their deal with Microsoft anymore. This is the world premiere of gameplay apparently. Single player campaign with up to four friends. Some campaign gameplay now. Looks like same old CoD. And now a multiplayer trailer montage. PS4 players get an exclusive Beta in August and first access to all map packs.

Sony sure loves their montages so here is another one. God of War III, Nathan Drake collection, Metal Gear Solid V: Phantom Pain, Ratchet & Clank, it all looks good. Until Dawn gets a bit longer representation and even the PS Vita gets 20 seconds worth of love in there.

The Star Wars theme song is playing. And it’s not what you would expect. Disney Infinity 3.0 announcement looking to bring Star Wars to kids and family. Two new play boxes are announced centering around Star Wars. A limited edition starter pack for Disney Infinity is coming for PS4 one month before they are available for every other console. A new trailer for the play boxes are announced. A Boba Fett figure is also coming out.

We’re wrapping up now one last announcement. Surely we will end on Uncharted 4: A Thief’s End and it seems that way. Yep we’re getting a look at some gameplay as Nathan Drake starts off in a crowded market. And he is not moving… Some technical difficulties it looks like, the demo starts again. And this time we’re off. Nathan carefully navigates the crowd even apologizing to people he bumps into. Game is presented very well. A shootout starts and it seems environments get destroyed in real time. We’re leaping from buildings, driving Jeeps, running, gunning it all looks like great fun. Seems like you can take multiple paths as well. Nathan Drake is about to run into a pillar, cut to black. End conference.

It’s hard to be unhappy with that press conference from Sony (unless you’re a Crash Bandicoot fan, next year guys, next year). Don’t forget to check out all the trailers embedded above and the full conference is available below for your viewing pleasure. 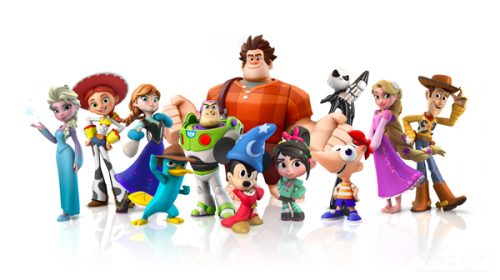