Viz Media has just revealed the upcoming release of Sailor Moon R Set 1. As with the release of the first season, there will be a three-DVD set and a Limited Edition set containing three DVDs and three Blu-ray discs. The sets will feature episodes 47-68 uncut and unedited with dual audio, and will be released on July 14, 2015.

The DVD set will feature trailers and carry a suggested retail price of $44.82 USD. The Limited Edition Blu-ray set will feature AX cast interviews, dub recording behind-the-scenes, an art gallery, trailers and the textless opening and ending animations. This set will also feature a 96-page full-colour booklet, with everything being contained in a premium chipboard box. It has a suggested retail price of $79.98 USD.

While stocks last, anyone who pre-orders the Limited Edition set from RightStuf.com will receive an exclusive 1.5″ goldtone coin featuring Sailor Moon’s second transformation brooch and transformation phrase. This coin is pictured directly below. 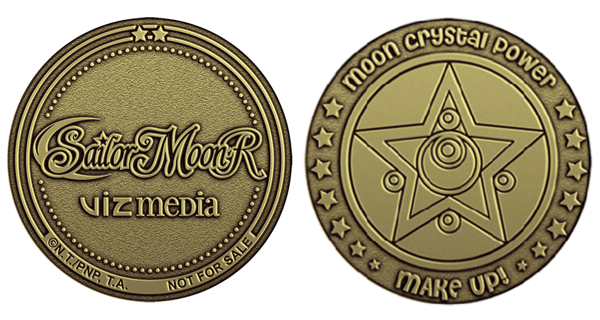 The English dub cast list for Sailor Moon R has also been announced. Here is the cast list in its entirety: