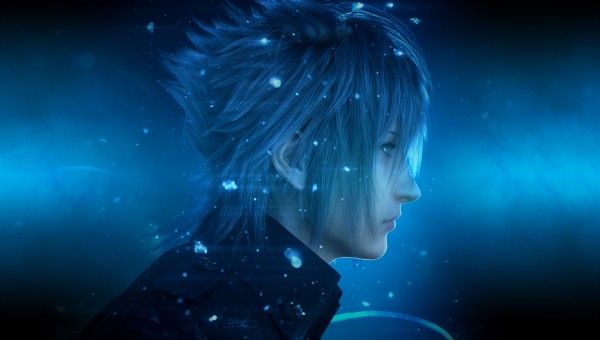 I can’t say I’ve personally been a big fan of the Final Fantasy series. The only game in the series I’ve ever played was Final Fantasy XIII which I mainly got into for the fantastic looking graphics but did have a good time with. Over five years later and now Final Fantasy XV is on the horizon, with Square Enix releasing a demo in the form of Episode Duscae. The graphics and scale again sucked me in so I was happy to give this demo a try when it was up for grabs. Is Episode Duscae worth the 3 or so hours of your time it takes to complete and does it impress? Yes and yes.

I assume Episode Duscae takes a very small part of the story from around the middle of the full game and then places you in that section of the game, tasking you to take down this Behemoth to get enough money to fix your car and end the demo. If the scale of the plains area represented in Duscae is only a tiny portion of the games entire world, then be prepared for an absolutely gigantic world to explore in the full game. Duscae is full of diversity with plains, forests, wetlands, caves, campsites etc. and there are lots of items to pick up scattered around the world, some a lot more valuable then others. Enemies populate the land at a good rate, giving you a good mix of battles and breathing room to explore. Unfortunately you are restricted to being on foot for the entire demo which is a little slow and means you don’t get to ride the adorable Chocobos at the ranch. 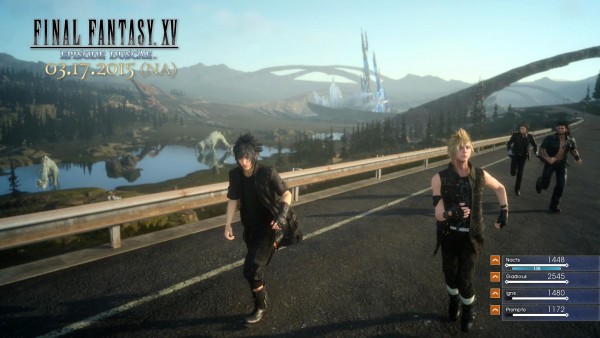 The Duscae region is a marvel to look at. Huge beasts roam the detailed land and are truly a sight to behold. The draw distance lets you see all the way out to the furthest mountain with minimal pop up outside of a few small things like small grass shrubs and plants. Lighting is impressive, particularly in the cave areas with realistic shadows and the way the light interacts with the areas and the main cast’s clothing. Textures are of a high resolution and the amount of plant life populating the world is again impressive. Character and enemy models are fantastic as are their animations, and seeing small details like the environment being affected by wind coming from landing ships was a nice touch of polish. Players will be happy to know there is no ‘transition’ screen between battles now, simply attack an enemy or enter its territory to start a battle and run away to leave.

The biggest let down technically is the frame rate, which can drop to low levels and can barely hold steady whether that be in battle, running across the land or even in cutscenes. It’s a shame as while far from unplayable, it does detract from the entire experience but keep in mind this is only a demo and we hope Square Enix can at least maintain a fixed 30 FPS for the games full release. A slight bump up in resolution would also be appreciated as would some more constant anti-aliasing. 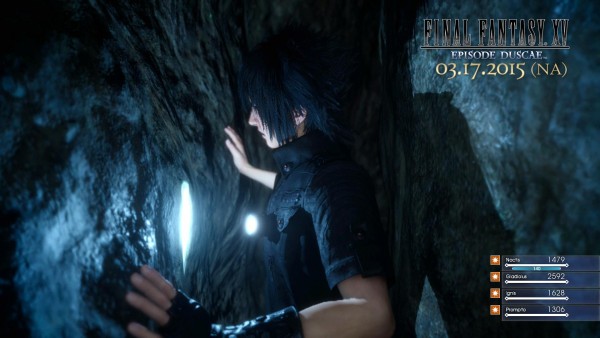 Audio was a big highlight of the demo. The music stays true to that classic piano and violin sound the series is known for and is brilliant here, fitting the environment or battle perfectly. The surround sound implementation is another highlight, as voices and footsteps come through the appropriate speaker. Tracking the Behemoth is a thrill as you hear the massive booms with every step he takes and snarls sound threatening. Combat sounds satisfying and varied and voice acting sounds great, with each character’s performance fitting their personality. The Japanese option is always there if you’re not a fan.

Of course this game isn’t a first person adventure so you experience everything through the main playable character of Noctis, a young prince who likes to sleep and is gifted in combat with plenty of super natural abilities. You also have three friends with you all with their unique personalities and combat abilities. There’s the smart and plotting Ignis who wields a pair of knives, the strong leader Gladiolus who wields a giant sword and the goofy kid Prompto who uses guns. It’s pretty stereotypical stuff, but the characters are likeable and I was loving the sense of comradery between all four with all the banter and assistance in combat. 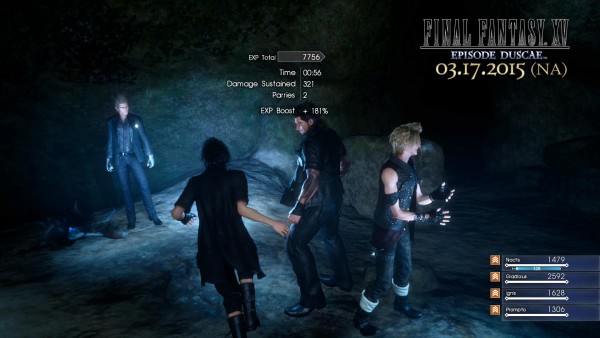 When you’re not exploring you will most likely be engaged in combat. Final Fantasy XV is best described as a real-time action RPG. If you expected hack-n-slash gameplay like Devil May Cry or Dynasty Warriors then you will be wrong. The combat is fast paced and does reward timing and reflexes however MP, skill and party management also play a huge part in success in battle. Players attack by holding down the square button and defend by holding L1 and while that may seem simple the combat is far from it. While holding L1 you are basically invincible but you can not attack while doing it and the action drains MP, meaning you have to constantly balance defending and attacking. A parry option is available and while it is hard to pull off and has a learning curve, much like the combat itself it is very satisfying.

There is also a few special abilities that tie into what weapon you use, granting you a maximum of five special attacks you can use in combat. When you find a new weapon you can also switch to that ‘mode’ that will grant you new abilities. An ancient sword I found allowed me to summon these cool light swords which made all my attacks more powerful and faster at the cost of constant MP drain. You will also have your three buddies helping you out at all times and can revive them whenever the enter stasis, which they can do the same. I was never dissapointed with the AI here. They heal you and each other when needed and handle themselves in combat just fine. Lastly you can use items which thankfully freezes the combat so you’re not struggling with menus and enemies while trying to give one of your friends a potion. 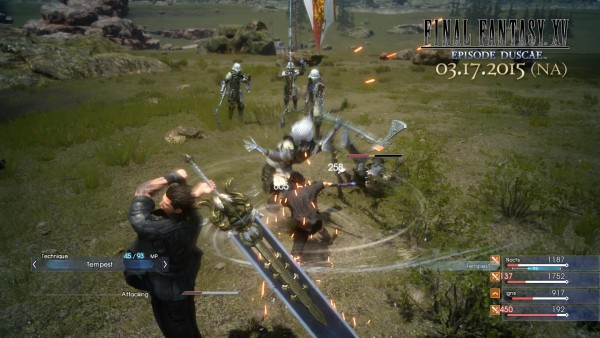 A unique element in Final Fantasy XV is camping. The world has an accelerated day-night cycle and at certain locations such as campsites or caravans you can choose to set up camp which will advance you to the next day. At camp you are fully healed, level up with all the exp earned throughout the day and also receive certain buffs for the entirety of the next day depending on the meal you eat. It’s a cool system and makes you think about what meal is best suited to the day ahead you have planned. A perfect example of this is when I first died in this long cave full of these goblin witch characters who kept poisoning me and draining my health. The next day I tackled the cave after eating a meal which gave me immunity and Noctis and the boys fared much better. You’ll definitely want to gain these boosts as the demo is fairly challenging especially when upwards of 15 enemies surround you at once.

I had a great time with Final Fantasy XV Episode Duscae. While the performance of the game is the main thing that needs a tune up the rest of the game is impressive in it’s scale, gameplay, visuals and audio. The four characters are likable and are a strong unit and going on the full adventure of Final Fantasy XV should be an excellent time. The full game still doesn’t have a solid release date but we expect it to launch on the PS4 and Xbox One sometime next year. A PC release is also rumoured.