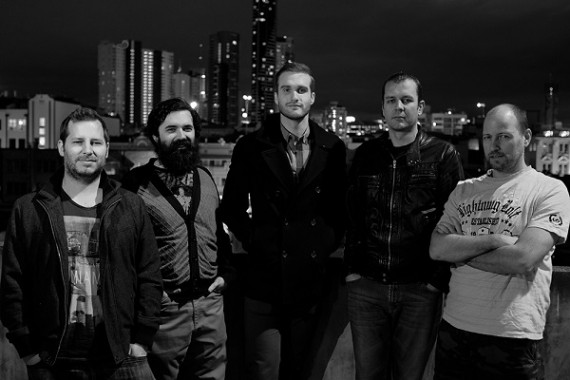 Satellite Reign is a new indie, strategy game by 5 Lives Studios which aims to be the spiritual successor to the old (and much loved) Syndicate franchise. I recently scoped out Satellite Reign as a title to look out for in the new year for all the high-tech/low-lives amongst you. As luck would have it, a fixer was able to set a meet up between myself, Chris Conte, and Dean Ferguson. After fulfilling my end of the bargain, I jumped into a secure node and got to extracting as much information as I could out of my two targets…

Belated congratulations on your successful kickstarter and your recent pre-alpha release of the game on Steam early access.

What has the experience been like with developing the game through a crowdfunding model in comparison to a publisher-funded model?

It has been overwhelmingly positive to be honest, we have a direct line to the end user which is priceless in our industry.  It has also been very humbling to have so many people share our belief in what we are doing. Probably the biggest difference is just the freedom to take risks and explore things we would never have done if a publisher had veto power. 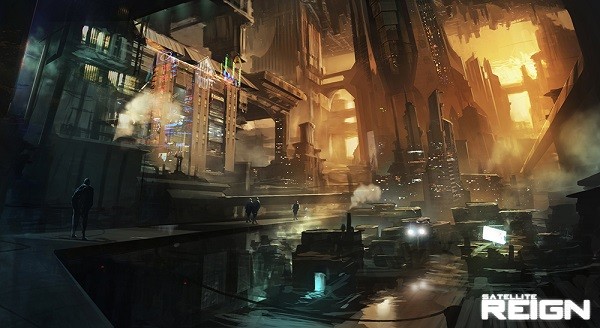 Freedom, sweet freedom. From what I’ve seen so far, the look and feel of the city nails a gritty and neon cyberpunk aesthetic. What influences did you have in designing the city?

So much, there is an immense body of work in the Cyberpunk style for us to draw from.  Our biggest influence for the city visually was probably Bladerunner.

It definitely comes through. The area of the city that’s in the current build is huge. How big a city have you got planned for the final product? What process did you guys go through to plan out the cityscape?

The currently released district is one of 4, each is roughly the same size…so its a very large city.

The planning stages were largely handled by Chris (designer) and Brent (environment artist), they blocked out the city in what we our ‘call white boxing’ phase.  This is where they lay down basic forms to denote specific areas of game-play/art. At this rough stage it is all about getting the basic flow and game play mechanics in and tested before we do anything long term such as art passes.  It allows us to play the game and see how the design is working and make changes quickly if needed.

There appear to be plenty of law enforcement and corporate security type enemies in the current build of the map, what other enemy types do you have in store for the final game? Are there plans to have other, competing syndicates with their own agents trying to take over the city?

We have 3 unique factions, each control certain areas in the city.  They aren’t actively trying to take over the city from each other but they have no love for your team.  We also have larger more imposing mech units on the way. 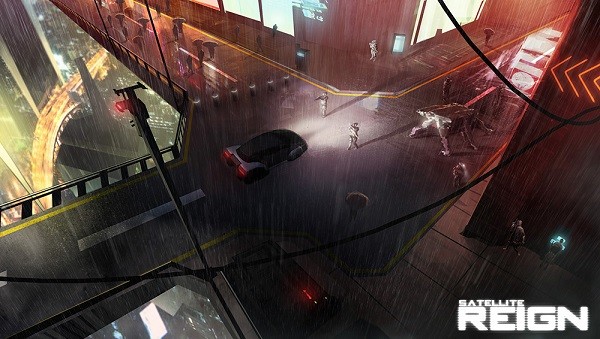 The end goal Satellite Reign is to take control of the city for your own nefarious purposes (or so my fixer tells me). To that end, how would the game-play transition from you ‘stickin’ it to the man’ in the early game to ‘being the man’ in the end game?

Your goal isn’t to take control of the city bit by bit, but rather to work your way through the city, building up your team to strike at the heart of the oppressive company, which has a stranglehold on the city. You start with a small team and limited resources, but through stealing, bribing and violent means, you can take your team from lowly cloned agents, into the heavily augmented, fully equipped, battle hardened killing machines you will need to make the final push into the Dracogenics headquarters and gain control of their satellite network.

Ah, well that certainly does sound a lot more cyberpunk. How deep does your simulation of the city go? Are there specific scripted instances for the player to encounter or will all events be the result of emergent game-play?

None of the moment to moment game-play is scripted. We have quests that even themselves have random elements to them where we set up things for the player to do but the enemies they face up against, the routes they take, the rewards you get and the chaos that ensues will be different every time you play.

Cyberpunk fiction generally portray a level of technology which is not too far removed from what can be seen today. Have you been working in a similar manner with your weapon and vehicle designs, or have you drawn upon other avenues of inspiration to create the tech in the game?

A little of both, we wanted to keep out of the realms of full on science fiction where possible, but at the same time its all about allowing the player to have fun so if a weapon or item is a little far fetched but really cool to use then that is fine with us.

Cool. Thanks for your time guys but I’ve got to cut the line as the trace is getting clos-

While you wait for a flash-cloned replacement writer to finish our preview of the current build of Satellite Reign, you can check out the game’s website here or jack into the game yourself through Steam. 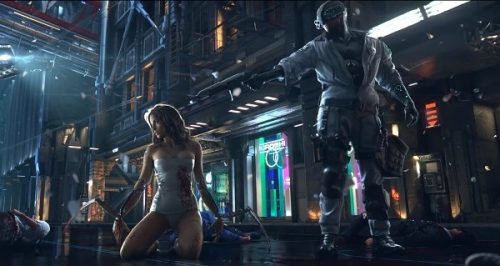