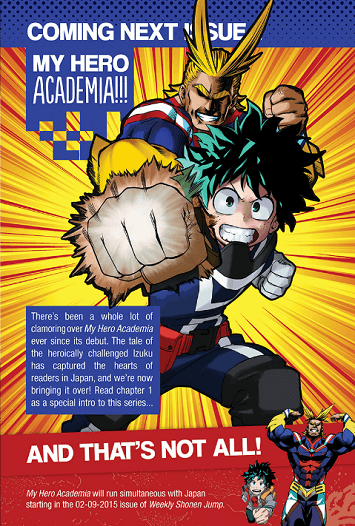 The latest issue of Viz’s Weekly Shonen Jump digital magazine has announced that they will begin releasing chapters of the breakout manga hit of 2014, My Hero Academia (Boku no Hero Academia), in English starting with next week’s issue.

Viz Media also announced that they will begin running the series simultaneously alongside the Japanese release starting in the February 9th issue. It is worth noting that currently Viz Media has not announced any plans to bring the collected volumes of the series to North America at this time.

Created by Kōhei Horikoshi, also known for his work on Barrage, My Hero Academia takes place in a world where super powers and special abilities are commonplace and a young boy named Izuku Midoriya wants to become a hero more than anyone else. The only problem is, he has no powers whatsoever until a certain event occurs that changes his life.