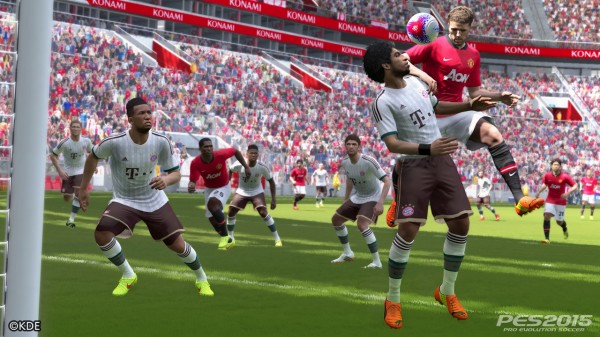 After the fiasco that was my first encounter with the Pro Evolution Soccer sports game series at EB Expo I felt eager to give the game a second chance. When the time came around and I was given the chance, I put my hand up eagerly to give the new Pro Evolution Soccer 2015 another go at its preview event in Sydney. I moseyed on down to Cheers bar over on George Street and saddled up to have my backside handed to me once more at the PES 2015 preview event. I was pleasantly surprised by the entire experience.

The first time I played the game, I had only 15 minutes and no tutorial or tutor to teach me how to play the game with any proficiency. This time however, I had some of the game’s die-hard fans to teach me, and contrary to the impression you might receive from the comments on my previous article; they’re actually quite pleasant people to be around. With the help of these awesome chaps, I was able to finally experience how PES 2015 should be played.

Firstly; my initial sentiments that this was a difficult game to master have been reinforced. Even with veterans of the series, I was still having trouble mastering the controls and the figuring out the gameplay. Another first time player of PES had similar difficulty learning the game and they were apparently an ardent player of the competing FIFA series… so I’m not just speaking from my own ineptitude. This game is one which requires time and effort to master… time and effort which I did not have. After I was given a crash course in the controls, I was paired up with a similarly newb-ish player and told to have at it. 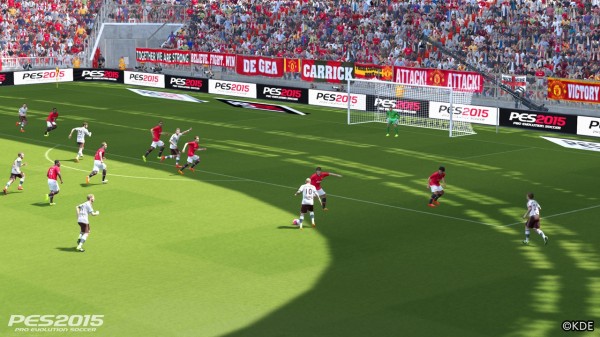 I feel that this time I was able to hold my own in the game. There are few feelings which can compare to playing a game in which you and your opponent are evenly matched. We each played a game which focused on different styles. I was quite proficient at passing the ball up the pitch quickly (like a game of pinball) with the AI largely moving my team mates into position quite capably. My opponent preferred to avoid passing and dribble the ball up the line as quickly as possible. Numerous times we both came within striking distance. Numerous times our shots flew wide/got intercepted/were prevented by the liberal use of slide tackles. I generally felt that playing defence was not as fun as playing attack but that may have been because I haven’t quite gotten the hang of it. Ultimately the match ended up as a nail-biting draw as neither one of us could get the upper hand on the other. 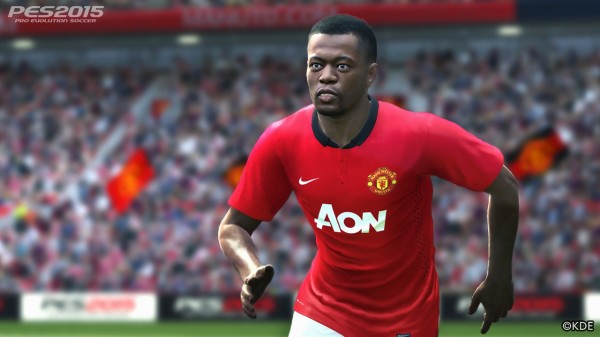 Flushed with my glory from my non-defeat, I grabbed some booze and chatted to the fans about their thoughts on the game. All of them had played the demo and were excited to have a look at the full game. Talking to them, I got the impression that these guys were reveling in the highly detailed nature of the game. For them, the strength of the PES series came from the fact that the game incorporated details such as deep simulation of headering the ball and advanced motion capture being used to more accurately portray the movements of a goalie (I kid you not). For these players, the intense simulation which the game provides as opposed to a more accessible, arcade game experience is what gives them its appeal.

They regaled me with their opinions on what they thought on the new additions to the game with various features earning their adoration and their ire. They were unified however, by a shared a love of this game which is based upon the ‘Beautiful Game’. I can’t offer an opinion on whether these changes in this installment are any better or worse than the previous version, but I can say that Pro Evolution Soccer 2015 is a fun game and that it’s passionate fanbase is one of the most accommodating to newcomers (at least in Sydney, Australia).