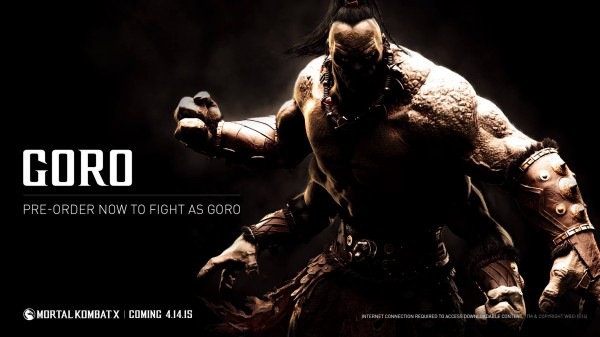 Finally, we have a firm release date announced for Mortal Kombat X. While I, being an MK fanatic who is lacking patience, was hoping for a January/February release, Mortal Kombat X will be available for the Xbox One, Xbox 360, PlayStation 4, PlayStation 3 and, yes, PC on April 15, 2015 in Australia and the next day in New Zealand.

Warner Bros. Interactive Entertainment not only revealed that, but also (as you’ve already seen above) a pre-order bonus: Goro, as a playable character for the first time in almost 8 years! I expect that the Shokan Prince will be made available as a separate DLC add-on later on, but for now he is being marketed as retail channel-wide exclusive. Fighting game/MK fans… go pre-order, now! Or the four-armed warrior will break your $500 sunglasses and treat you like Art. Remember him? Exactly.