London, Thursday June 5th 2014: UK developer RedBedlam has taken a step towards redressing the longstanding gender imbalance in the FPS genre by announcing that the lead role in its innovative, generation-hopping shooter Bedlam will be a new character created specifically for the game.

Players will take on the role of Heather Quinn (aka Athena), a programmer at medical scanning developer Neurosphere who finds herself transported into the world of Starfire: a nineties FPS she remembers from her teen years. Searching for an explanation and a way home, she ventures beyond Starfire to discover a vast realm of interconnected game worlds documenting the evolution of the FPS genre and of video games in general.

Bedlam is adapted from the novel by Christopher Brookmyre, but diverges from the original in this change of protagonist. The novel’s hero, Ross Baker, does feature prominently in the game, but the switch to a female lead – who is a gamer and sci-fi fan – offered a fresh and bitingly humorous new perspective upon the “gameverse” that the player will explore.

“Choosing a strong, independent and modern female lead for this role not only means that we can help to address the woeful diversity situation amongst video game protagonists,” said Nick Witcher, Marketing Director at RedBedlam, “but it also allows us to make the most of Christopher Brookmyre’s writing by drawing upon his acclaimed reputation for creating compelling female characters.”

“The average FPS protagonist is a testosterone-addled sociopath with all the endearing charm of a cornered honey badger,” said Christopher Brookmyre. “I thought we could prove that you don’t need balls to be ballsy. Players of both sexes will identify with Athena, because first and foremost she is a gamer herself. Women have been shamefully ignored by the FPS genre, so it seemed appropriate that we have an acerbic female perspective in a game that plays upon the evolution and conventions of the genre.”

Developed in association with Standfast Interactive, the decades-spanning FPS takes players into a unique world of action and intrigue, visiting a range of genres old and new, from arcade platformer classics to modern RTS and shooter environments, all from a first person perspective and with a smattering of Brookmyre’s trademark dark humour.

For the latest screenshots and concept art for Bedlam please check out the gallery on the game’s website – http://www.bedlamthegame.com/gallery/

The game is set to appear on Steam in the summer of 2014 and with another two novel / video game tie-ins planned, the partnership between RedBedlam and Brookmyre looks set to take the gaming world by storm, with a new direction in plot-driven game design.

Christopher Brookmyre has written 18 critically acclaimed novels and won numerous awards for his works, also appearing regularly on primetime radio and TV. His love of videogames has manifested in countless references and now, for the first time, in a fully-formed first person shooter that itself pays tribute to a wealth of iconic titles. Bedlam the book was originally published in hardback in February 2013 and paperback January 2014. 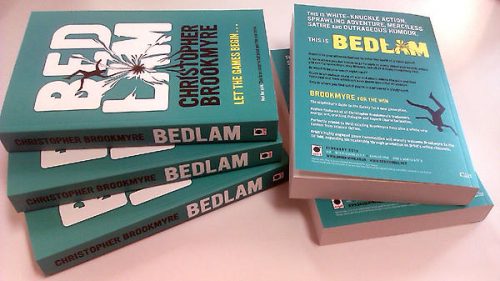