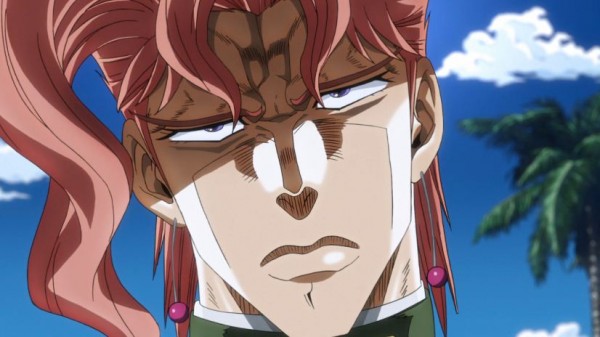 There’s so much that can be said about “JoJo’s Bizarre Adventure”. One thing is that it somehow jumps between badass and ridiculous almost seamlessly. Another is that it has a cast of character who are both incredibly stupid and immeasurably smart  at the same time. The thing I happen to love the most about “JJBA” though is that it can and will always take you by surprise! No matter what you think is about to happen next…you’re probably going to be wrong. Last week saw the introduction and then death of a character called Devo (“Soul Sacrifice”) who used a small, stuffed doll to do his bidding. Before you even think about that twice I want to tell you…that’s nothing compared to this week’s enemy, a man you’ll come to know as Rubber Soul. 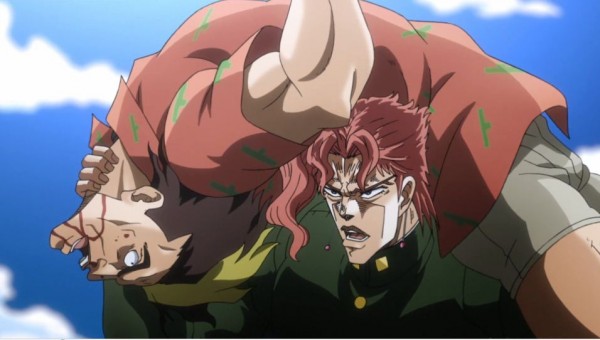 Episode 8 ended with one hell of a cliffhanger thanks to Joseph’s “Stand” ability. It was a premonition that warned the group of a mole, the one called…Kakyoin. I’m sure, as avid fans of the series, you didn’t entirely believe the TV at face value and for that I commend you because it’s clear the TV doesn’t know everything. Jotaro, Kakyoin and Anne (who I’ve been calling “Pico” this whole time) decided to head down to the shore for the morning to get themselves something to eat and possibly a nice cool drink. Unfortunately they’re travelling with a traitor…or so we’ve been told.

The trio run into a bit of trouble when a pickpocketer makes the mistake of trying to steal from kakyoin who, well, isn’t quite himself. Catching onto the thief quick, Kakyoin dispatches “Hierophant Green” to trip him up. He then proceeds to channel the side of him that loves professional wrestling and back breaks the wallet-stealing scumbag…something the “real” Kakyoin wouldn’t do. Catching eye of a couple tasty looking rhinoceros beetles, Kakyoin leaves the young man be to take a nibble…something the “real” Kakyoin wouldn’t do. Probably. I’m not sure anymore. With that odd experience now behind them, the three decide to head up to the train station via the cable cars. This is where the episode truly gets weird. 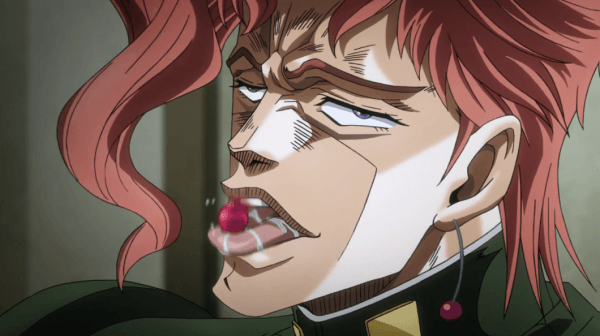 – Cherries Are My Favorite! –

Cherries Are My Favorite!

It’s not that the chilled coconut juice didn’t quench Jotaro’s thirst, it’s more that Kakyoin’s little “alpha male” display left him with a bad taste in his mouth so it’s time to grab an ice cream WITH a cherry on top…Cherries make JoJo feel good. Kakyoin, apparently being quite the fan of fruit, asks Jotaro for his cherry. Jotaro unfortunately says yes and the audience is subjected to what I can only compare to the beginning of a horrific pornographic film. “Cherries are my favorite!”, Kakyoin says as he aggressively “tongues” the small fruit for longer than anyone should should…something the real Kakyoin wouldn’t do. Ok, let me level with you; by this point in time it is obvious that THIS is not the real Kakyoin. Probably. I’m not too sure. Jotaro is then hurled off of the side of the building, luckily Jotaro Kujo is a hulking mass of psychic energy and is able to quickly grab onto the side of the building before he falls to his death. Kakyoin plays it off like a little joke between friends but Jotaro is having none of that! SMACK!

JoJo punches Kakyoin in the face, seemingly breaking his jaw and forcing him onto a cable car. He knows that’s not the “real” Kakyoin and it’s about time he stops the childish games. Anne runs to a pay phone and calls up “Jotaro’s grandpa” to explain the situation. As usual, Joseph and Avdul immediately know what is going on and they’re quick to do absolutely nothing about it. Jotaro accuses Kakyoin of being possessed and the now mutilated young man explain that he’s not so much possessed as he is…not Kakyoin at all. Jotaro notices a little yellow blob on his pinky finger as his friend’s face begins sliding down off of his skull. The seemingly decaying corpse of his school pal now explains that he is a man in control of a “Stand” that encompasses, digests and fuses with all different types of mass, making him bigger and stronger. He merely took the shape of Kakyoin to attack Jotaro and the crew for DIO. 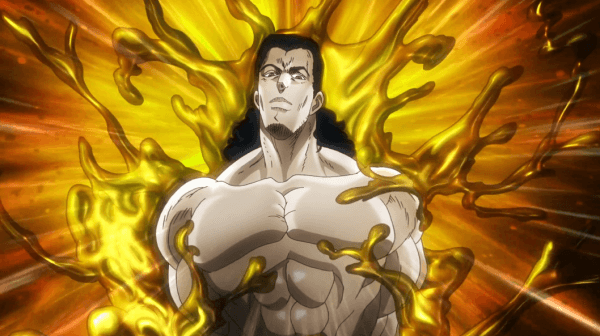 – They Call Me Mellow Yellow. –

They Call Me Mellow Yellow.

The man never actually introduces himself but he does give us the name of his stand; “Yellow Temperance”. He reveals his true body alongside the true form of his “Stand” which happens to be a mass of yellow goo, the likes of which are very similar to what Jotaro is slowly being devoured by. He never actually says his name but a bit of research will tell you that it is “Rubber Soul”. Named after the Beatles album, this man is just another assassin for DIO though, unlike Kakyoin himself, Rubber Soul is under no divine influence…he’s just a dick that wants some cash. Jotaro tries to fight him using “Star Platinum” but it’s no good, “Yellow Temperance” just continues to consume him and he has no choice but to jump ship and escape the cable car…mid air. Using his awesome psychic powers, Jotaro manages to make it onto a pillar safe from the majority of “Yellow Temperance” but still afflicted by the small piece that has attached itself to his hand. Jotaro thinks quick and gets out his lighter to burn the goop off of his hand, unfortunately he knows absolutely nothing about “Yellow Temperance” and the lighter just makes it spread faster…it was a good guess, man, don’t beat yourself up about it.

Not out hero is in a hurry, he needs to find a way to get this sludge off him and he needs to find it quick. Spotting an oncoming cable car, Jotaro leaps at it using “Star Platinum” to help him make it across the gap and getting into the cab. There he finds a young boy, his father and a robust lady that’s clearly overcompensating for something. He snags the young boy’s ice block and rubs it up against the blob on his hand thinking “if heat doesn’t work, maybe the cold will” but, once again, he’s wrong and instead of spreading across his hand, “Yellow Temperance” just pierces his skin in an act of rebellion against the chill. His heart begins beating faster than ever. Then…the young boy screams. Jotaro turns around to the grueling sight of the child’s small dog being devoured by the large lady; somehow “Yellow Temperance” was able to make it from one cable car to the other without anyone seeing him and took the form of this fat lady who now proceeds to attack Jotaro. The delinquent channels his ancestors and explains to Rubber Soul that the Joestars always have a back up plan when it comes to combat and that’s to simply run away. Jotaro then hurls himself (alongside his enemy) out of the cable car and into the briney deep…well, it wasn’t exactly “deep”…both of them could stand up in the water but…you know, I’m trying to be dramatic. 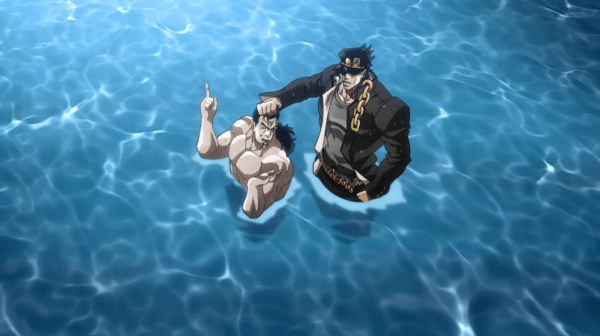 The rest of the episode is just your typical “Stardust Crusaders” battle: Jotaro is on the winning side when he realizes that he can kill the “Stand” user without even having to attack the Stand. He does this by attempting to drown him and then quickly pummeling him. Rubber Soul then puts Jotaro back on the loosing side when he escapes the water and uses a drain pipe to try and suffocate our hero. Jotaro then steps back onto the winning side by channeling water through the drain pipe, making it shoot out like jets at Rubber Soul who is then knocked back into the water and is beaten to a pulp by Jotaro. The way “Stardust Crusaders” battles go has become really boring and entirely too predictable. I understand that the main characters aren’t allowed to lose but do they always have to win in exactly that way? We’ve seen it countless times before. The combatants go back and forth between winning and loosing before the main character always wins, not to mention in exactly the same way every time.

Jotaro gets one over Rubber Soul by beating him up in the water, the reason behind him not being able to use “Yellow Temperance” to defend himself in the water wasn’t exactly explained though my assumption is it had something to do with the salt water which, even then, doesn’t make a lick of sense. Jotaro beats the bad guy up with “Star Platinum” and then begins to question him: “Are you working for DIO?”, “Who else is coming to kill us?”, you know…the usual. Within a matter of seconds, Rubber Soul is spilling the beans about his fellow assassins. He even goes into great detail about a particular man with two right hands who “killed Polnareff’s sister”. I understand these antagonists do their research but wow was this guy learned. The episode ends with the group getting onto a train headed for India. They say that Anne stayed in Singapore to meet up with some family but it is quickly revealed that she is right there on the train with them…only a carriage away. I pray that next week’s episode outdoes this one because, for the most part, I wasn’t exactly impressed. Come on, “Stardust Crusaders”, show us what you’ve really got! 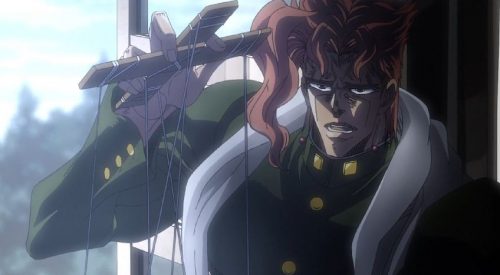 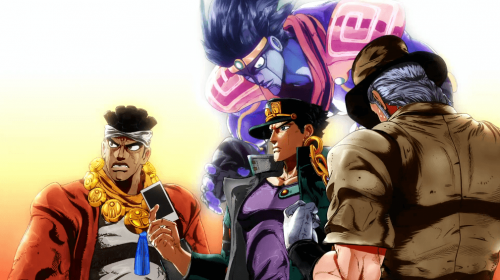