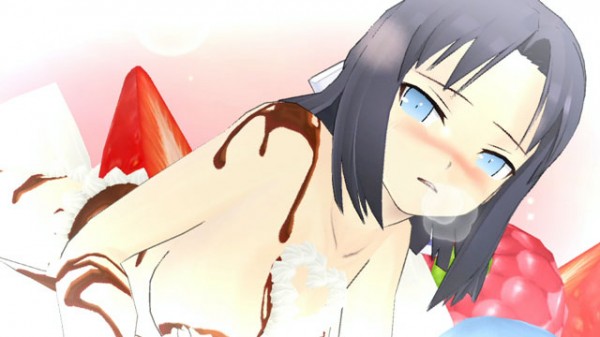 You may remember that a cooking rhythm game called Dekamori Senran Kagura was announced and released in Japan earlier this year for the PS Vita. Well at that time it seemed that a game with such an odd premise but a delightful mechanic that involved the female characters’ clothing being destroyed while cooking would not be released in the West despite XSEED‘s success with the series so far.

However not only has a card game with a rubbing mechanic been released for the PS Vita but an idol simulation title has already been brought over to the North America and it seems that Dekamori Senran Kagura will be as well. NeoGAF was able to catch a listing on E3 Insider, an official website for E3, that showed a title called Senran Kagura: Bon Appétit.

This listing has since been removed but it listed the title for Winter 2014 release and contained the following description:

Senran Kagura Bon Appétit! is a rhythm spin-off of the ninja brawler series, Senran Kagura. Featuring cooking battles rather than shinobi showdowns, the emphasis is on outrageous humor and delicious food.

The Devil is a Part Timer, Senran Kagura, and latest Hetalia anime to be given home release