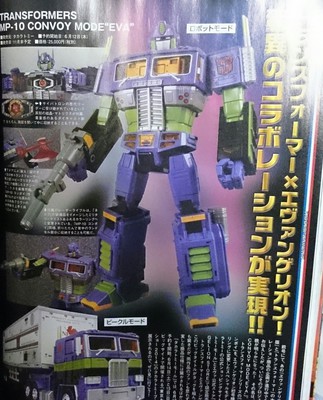 ’til all are one

Takara Tomy has finally revealed the details regarding the mysterious Transformers x Evangelion project mentioned a while back. As with some other franchises Transformers has decided to work with in the past, this crossover will take the form of a brand new figure.

Specifically the release is known as a Mode Eva edition of the classic MP-10 Convoy figure. As previewed in the teaser image, this version of the Autbot leader is a green and purple redeco of the original release. Though the heroic champion of all sentient beings still carries the Autobot crest, fans may also notice that the NERV logo is emblazoned on his trailer. Though I’m sure it’s completely on the level *cough* Cybertronian Instrumentality Project *cough*

The figure is set to release in Japan in November, though pre-orders will open up on June 12th for 25,00 yen. Though not an actual anime release or anything, having an Eva-Transformer to add to your collection is still pretty cool. No word yet on whether or not more Transformers will join the fray however, though it’d certainly be awesome watching the Autbots and Decepticons powered by Adam and Lilith wouldn’t it?