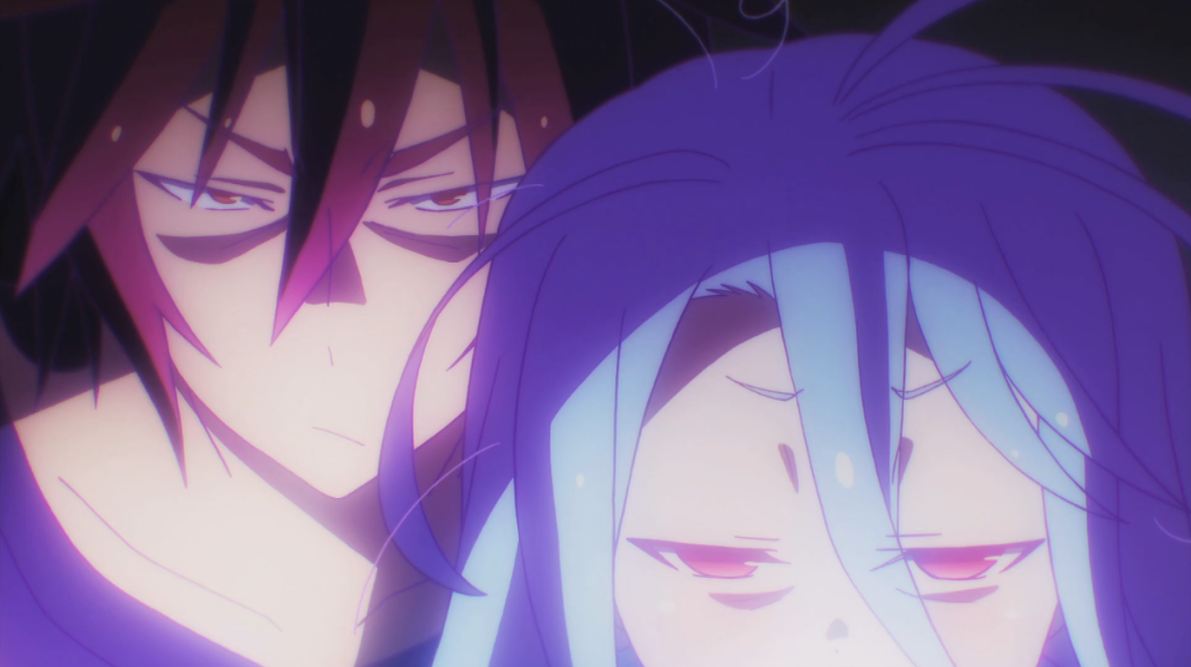 Not your traditional heroic duo

No Game No Life
Episode 1: Beginner

Life is complicated. As you make your way through the day to day mundanities of life, you cross paths with countless others who call this big blue marble home. You form bonds, be they friendly or not, and build a complex mesh of ideaologies that form the foundation for life…Then there are those beyond that. Whether intentional or not, some forgo a connection to the outside world in order to delve deeper into their own psyche…Or they just don’t like people. Regardless of the reason, forcing an introvert into society isn’t the best idea. That is unless there existed a world specifically tailored to their mindset…

Meet Sora and Shiro, a brother and sister duo who pretty much define the term shut-in. Wearing their NEET classification with pride, the two spend all hours of the day playing various games. From MMOs to chess, they utilise their genius intellect to dominate all who would dare oppose them. Having built a name for themselves as the enigmatic Blank, an unbeatable quartet of fighters, the two are able to overcome even cheating foes with sheer skill. It’s honestly very impressive. Not to mention the fact that both Sora and Shiro manage to control two characters at once. Hell, Shiro uses her feet to play…though I don’t recommend staying awake for five days straight for any reason. Poor girl. 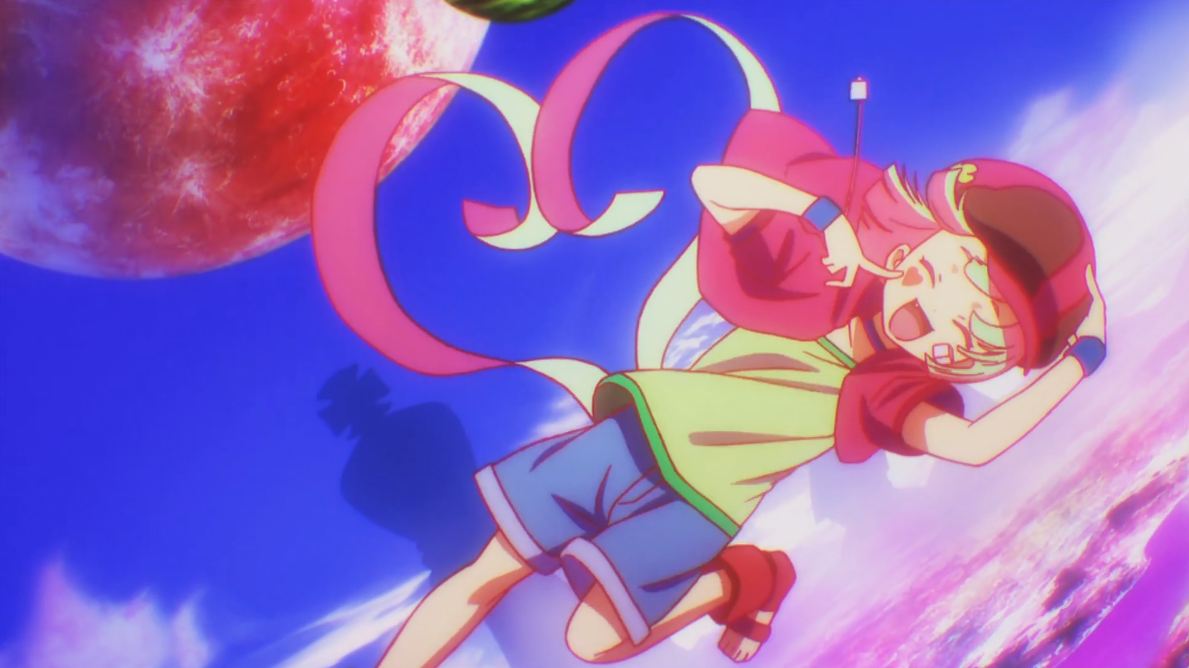 After receiving a mysterious e-mail, Sora and Shiro are invited into a chess game that proves surprisingly difficult for the gaming savants. It is at this point that the anime takes a rather sharp turn into the realm of seriousness. After being asked his honest opinion on the world, Sora explains how, to him and his sister, life is nothing but a crappy game. With no absolute rules, existence is nothing but a pit of chaos that should be avoided, hence their shut-in lifestyle. Though not even 10 minutes into the first episode, we’ve already jumped from quirky family who love video games, to ostracised siblings who only have each other. While this lends credence to their obviously close relationship despite the age gap, it also provides insight into their gaming habits. In the virtual world, people respect their power, stare upon them in awe. Even those who would dare to cheat are unable to compete with their power. Who wouldn’t want that? Yet they always leave their name blank. Despite their obvious desire for connection with other people, their introversion still dominates their choices. The duo almost  relish in the disconnect that anonymity provides them. Like looking at humanity through a window. Close enough to witness, but not participate.

Naturally the e-mail received was far from ordinary and the siblings soon find themselves plummeting from the sky above a foreign world. It is during this unexpected freefall that we meet the One True God, a rambunctious little chap known as Tet. Being the God of Games and sole surviving member of his race, it is Tet who imbued upon his world a set of easy to follow instructions, intended to appease his love of playing: the Ten Pledges. 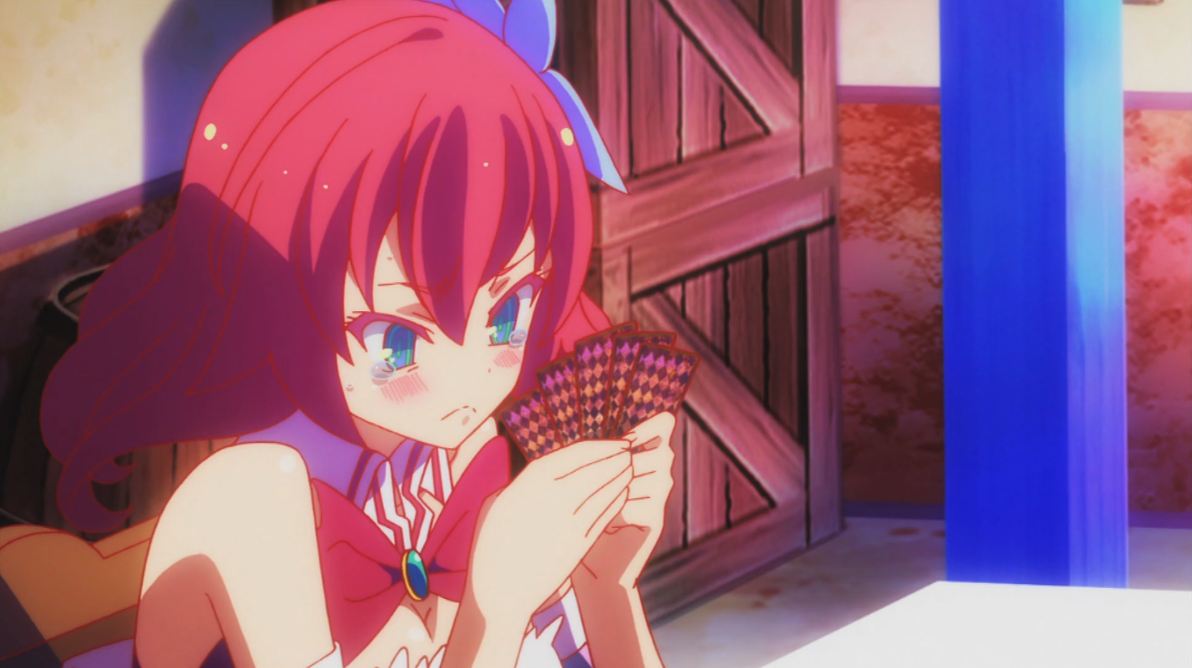 Ok, so it’s not the best poker face…

Being a world practically designed for them, Sora and Shiro have no trouble comprehending (and subsequently manipulating) the irrevocable rules of the world. Though from what we’ve seen so far, it doesn’t come as much of a shock. Despite living in isolation, Shiro expresses the same boldness he exhibits when playing as Blank. Combined with the fact that he does not give his name to those he meets, he seems happy that he can fully adopt his online persona. Becoming his “true” self. Following his train of thought in response to Tet’s e-mail, he even ponders why the protagonists of stories long to return to Earth, should they find themselves lost. This creates an interesting story element, in that, at this point, we have no idea where Sora and Shiro are heading. They have no grand goal to drive them forward, nor a desire to do anything but play. Even Sora’s self made list of objectives included nothing more than “Find a place to stay”. All things considered, it’s rather interesting to see characters who, though lost, are actually content. If anything, they’ve already come home after being lost for years. Quite a clever inverse of a traditional story type. 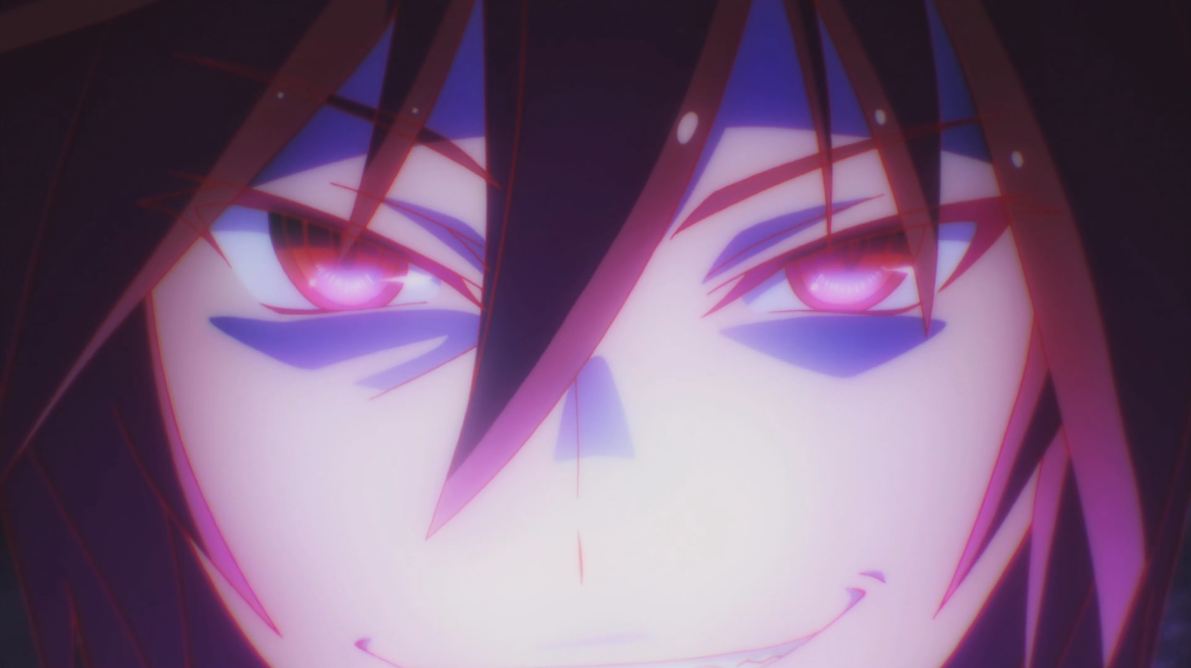 Well with their first objective completed, Sora and Shiro are one day into their brand new lives. Having already showcased their prodigious talents and witnessed the lengths other will go to in order to cinch victory, the games have only just begun in the world of Disboard. If that wasn’t chaotic enough, the girl Shiro informed regarding her opponent’s cheating turns up in the middle of the night clad in nothing but a blanket. 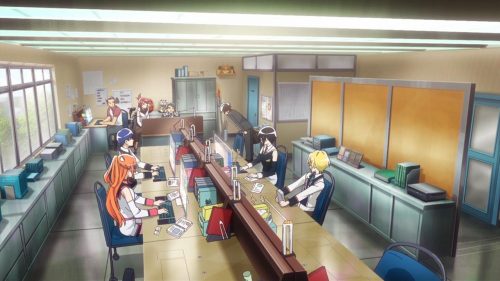