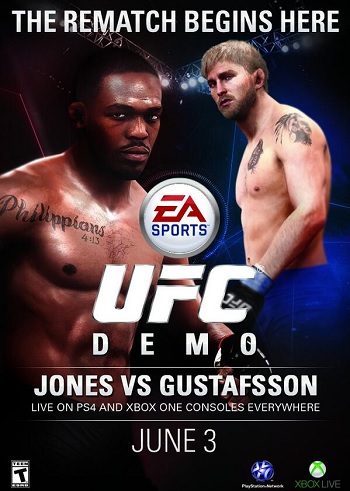 Back in April EA Sports revealed that a demo for their upcoming game, EA Sports UFC, would be released sometime before the game was released in North America and today they have followed up that announcement with a date for said demo. As you can see on the image to the right, the EA Sports UFC demo will be available for download on the PlayStation 4 and Xbox One starting on June 3rd.

Also as you may surmise by the image, in the demo players will be able to play as Jon Jones and Alexander Gustafsson. These two previously fought each other last year in UFC 165 for the Light Heavyweight Title and Jon Jones ended up coming out the victor in what many consider an extremely close match. As such players can let these two rivals battle each other virtually before EA Sports UFC is released on June 17th. At the moment players can still pre-order the game and receive an unlock code that will automatically unlock Bruce Lee as a fighter, though those who don’t pre-order can still unlock him by completing Career Mode on the Pro difficulty setting.