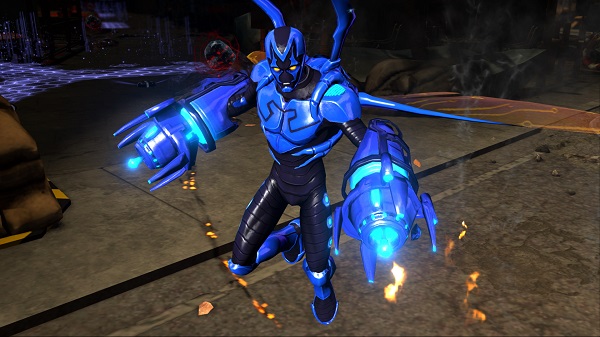 Infinite Crisis is a MOBA based on the DC universe. Play as Superman, Batman, Wonderwoman, Green Lantern, and more as you battle your opponents in a 5v5 game mode. Blue Beetle, the latest addition to the squad, is a ranged/melee assassin that swaps between the two roles to inflict high amounts of damage to enemies. The Blue Beetle, or Jamie Reyes, was granted powers when he tried to escape a fight. A blue scarab bonded with Jamie and covered his body with armor, and allowed him to access powers beyond his imagination. Swapping between a melee and ranged role, the Blue Beetle can dispatch his opponents in quick succession.

Below is the trailer for the Blue Beetle, in addition to a few screenshots they’ve released of the Blue Beetle. For more information on Infinite Crisis, check out their site here, where you can also sign up for their beta.