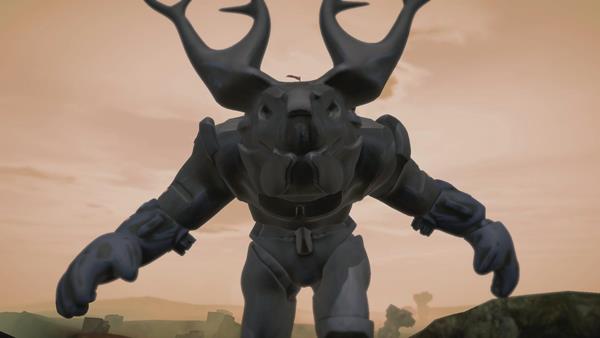 Burden, a game that was announced to be in Pre-Alpha at last year’s PAX Australia, has just had its first trailer début online. You can watch it embedded at the bottom of this article. The game will be coming to Steam an an Early Access title in the next two months, published by Surprise Attack Games. Developed by PixelPickle Games, Burden is a tower defense game set on a colossal mechanical beast.

The player must defend against onslaughts on multiple battlefronts simultaneously, placing shields and artillery towers on the exterior of their Colossus whilst also juggling defences on numerous nodes where enemies will attempt to board and penetrate. The land the beast journeys across throughout has been ravaged by a civilisation called the Mhoroa, who are themselves on the verge of extinction. The Colossi were built by ancient ancestors of this civilisation, and prior to being discovered by engineers, were thought to be a myth. It would seem the key to saving the world from self-destruction is guiding these beasts to key locations, although the player is met with some opposition bred by fear. Chris Wright, Managing Director of Surprise Attack Games, and Rob Dowling, Director at Pixel Pickle Games, said of the game;

Tower defense with a twist is enough of a cliché that someone somewhere is probably planning a game jam about as we speak. But if its a cliché to want to play a tower defense game set on a 200ft tall mechanical beast then colour me clichéd and call me Susan. – Wright

Everyone talks about standing on the shoulders of giants, but they never consider those shoulders have towers that can kill you. – Dowling

Burden has been developed for the PC, with Mac and Linux versions planned. Once listed as an Early Access title on Steam and available on other digital platforms, Burden will cost $15 before that cost rises to $20 for its full launch later in 2014. Surprise Attack and PixelPickle are planning an open, community driven development through to the final release and have launched a community-focused website to act as a hub for community engagement. And for those who are attending GDC Play, Burden will be playable at the Surprise Attack Games booth (#PL113) at the showcase from March 17-21. Check out the following gallery of screens.