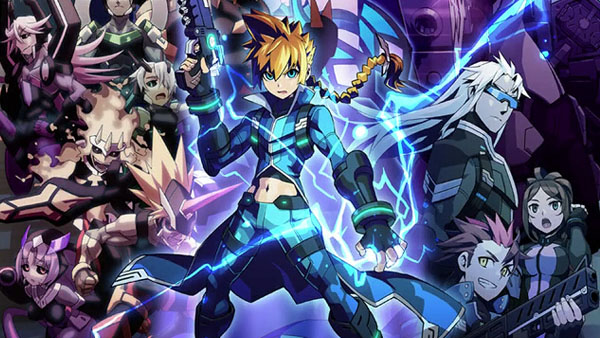 Keiji Inafune – a God in the world of action/platformer titles and the creator of the legendary “Megaman” series – is a busy, busy man as of late. Not only has he (and his team of developers) been working on the upcoming Megaman successor “Mighty No.9” alongside many other titles like “Yaiba: Ninja Gaiden Z” and “Kaio: King Of Pirates”, he’s now just announced his next side-scrolling title and, this time, it’s coming straight to the 3DS.

– The Azure Striker In Action –

“Azure Striker Gunvolt” puts players in control of a young renegade fighter named “Gunvolt” – a psychic hosting brilliant powers that unfortunately lives in a world where people of his kind (psychic user) are treated as lesser beings. The story follows “Gunvolt” and his comrades as they rise against this oppressive governing force with the hopes of breaking through the social barrier, taking out those who oppress his people and creating a world where each and every individual can live the life every person on this earth has the right to: A life of freedom.

The upcoming title was announced at the BitSummit indie games festival which took place in Kyoto. Fans of Inafune’s work will “mega” excited for this one, as am I. What came with the announcement of the game was an estimated release period, being summer of this year, and a platform, being the Nintendo 3DS. With all the excitement I feel coursing through my veins, I could talk about this all day but I guarantee you’d all rather hear from the man himself: An announcement trailer was also released with Keiji Inafune himself addressing the audience directly, you can see the full trailer in the featured video section below so head down there to check it out. Enjoy! (“Azure Striker Gunvolt” Official Website: Click Here)