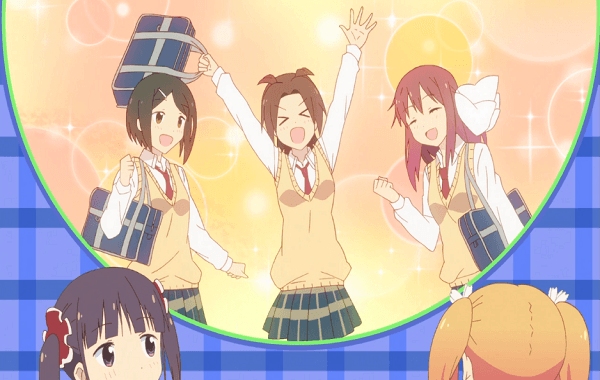 A new episode of Sakura Trick is here and my oh my do I have an F based impressions post for you. Whilst watching this episode I couldn’t help but notice a few themes that revolved around that particular letter, this is entirely coincidental I do realize, but I think it’s a pretty cool one and will result in an interestingly fun impressions post this week. So without any more stalling or faffing around let’s look at the five fascinating focuses featured in this fantastic episode, brought to you by the letter F (unfortunately it’s number six in the alphabet, damn the flow was so close).

Festival: in episode two we saw the significance in the school closing down in relation to the athletics day, in this episode it’s the schools cultural festival that’s under the spotlight. Yuu wakes up after class to find out that Haruka has left with Ikeno and Iizuka to the local coffee shop, what she doesn’t know is that Mitsuki has also joined them in order to talk about the festival. At first Mitsuki rejects their proposal of being in their production of snow white, but then changes her mind during in the second half of the episode.

Much like in episode two the cultural festival is very important to Yuu, only this time the reason is less selfish; as it will be the final festival for first years Yuu wants to perform with her older sister while they are both at school, the importance she places on not only Haruka but also her own family shows how caring Yuu can really be. But wait there’s more, and keeping with our little theme the next story just so happens to be a Follow up. 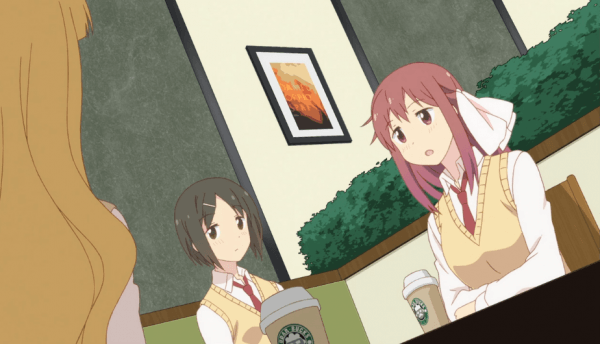 5-B: Witches and Apples and Onee-Chan

As the cultural festival draws ever so closer the six girls are planning the roles for Snow White, surprisingly the role that’s most sought after isn’t the main princess herself but rather the witch. During this discussion Mitsuki tries to look in on Haruka and Yuu and ends up being caught by the Ikeno, who then points out to her that by participating she will be able to observe the pair without looking suspicious.

After Mitsuki agrees to be a part of the production she gets the role of Snow White, this turns out to be even more awkward for her when Haruka is playing the prince and they have to re-enact the kissing scene. This would be the part where you’d expect an almost yuri moment between Haruka and Mitsuki but thankfully this doesn’t happen (I’ll get to that reason in a bit), instead we get an ending where Yuu and Haruka are kissing underneath a cape… in class…  the same room as the other four girls and most of their classmates.

Although ending with yuri is now expected this is quite a bold move as they are displaying their affecting in front of everyone, a very fearless act if you ask me. Now that both halves have been talked about it’s time to move on to what’s really important in any comedy show… 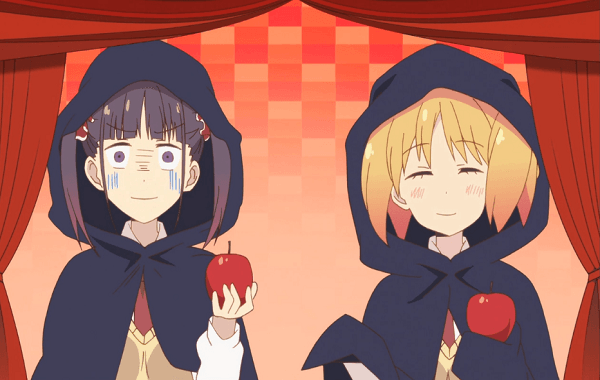 Funnies:  I am happy to say that this episode has picked up in its humour; there were scenes from both the first and second story that used the girls’ interactions for its set up and resulted in some pretty funny moments. The most entertaining parts from the first story came from a conversation Yuu, Shizuko and Kotone were having whilst walking to the café, the cafe name itself… come on guys what brand do you think they’re trying to depict… and the successful hi-five moment when Ikeno and Iizuka guess’ Mitsukis’ favourite drink (which just so happens to be Yuus’ favourite too).

There’s also a suggestive wink Iizuka give to Mitsuki, almost in a black mail-ish way which is a nice call back to the events that have happened in previous episodes. In the second episode we get a great depiction of both Yuu and Shizuka acting out the role of the witch, the contrast in both performances is spot on to how they would normally behave and ends up being a great scene. We then get Mitsuki misinterpreting the scene between her and Haruka, leading to an almost yuri kiss until Yuu interrupts them in a manner that best fits the jealous side of her. The way that all girls interacted definitely made the scenes funnier, combine this with the follow up nature of the festival approaching and we get an almost enjoyable episode. Unfortunately as much as I like this one there were two major F’s that just put me off and I fear it’s going to be more frequent in the future. 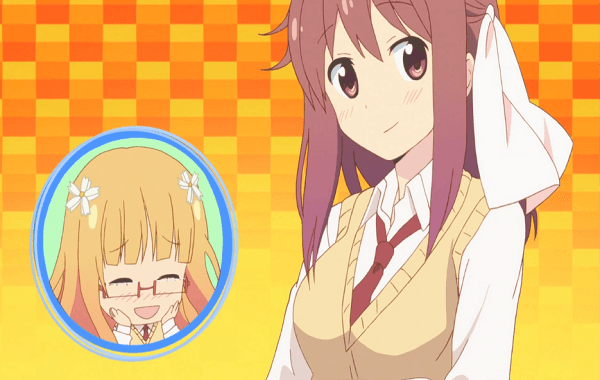 Fantasies: Surely I can’t be the only one who finds Mitsukis’ imagination just plain old irritating, I get the joke: she’s having romantic thoughts about Haruka for some weird reason, but it doesn’t add anything to the show. I do realize the scenes are for comedic effect because they are the same thoughts Yuu would be having, however they originated out of nowhere and don’t seem to be leading up to anything.

If these feelings were further developed then it would be interesting as it would cause more tension between her, Haruka and especially Yuu, but I have a feeling this would be too heavy for the show and they will make it nothing more than a quick laugh. Now then, on to the other F that jiggled me the wrong way with this episode…

Fan service: Again much like Mitsukis’ weird Haruka thoughts, the fan service in this episode was only used to get a quick laugh from its audience. Now granted the show did have small traces of fan service in previous eps (and especially in the OP) but in this one they decided to increase the amount of chest close ups and jiggling, which for the most part added nothing to the jokes. There was a scene in the café where Harukas and Mituskis boobs were used as a setup, but the constant close ups made the joke a bit too obvious resulting in the punch line not being as funny as it should’ve been. 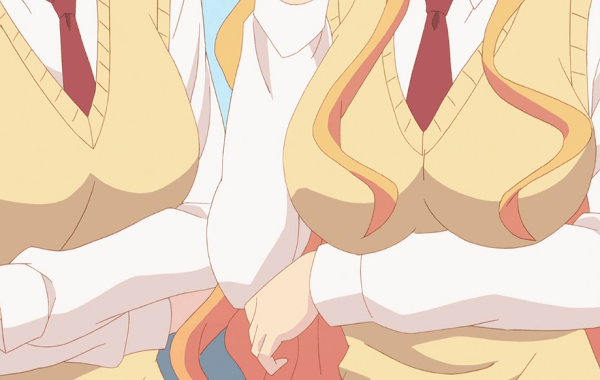 You can obviously tell they added in more fan service than usual because for the first time the show has given us an extra at the end of the episode, and it just so happens to be scenes of Shizuko washing herself, she even says the purpose of it was for fan service.

Apart from the previously mentioned points I did overall, as usual, enjoy watching this episode. The plot is getting more focused around wanting to do things before the school shuts down, so there is genuine emotion when a decision doesn’t go according to plan, and I did get more laughs out of this one then previous episodes. I’m still holding out for another fantastically awesome scene like the veranda jump or volleyball and this episode showed me that the wait may soon be over. And now as I finally finish frantically fretting over this post, I can reserve a front row seat for the special performance in episode 6. 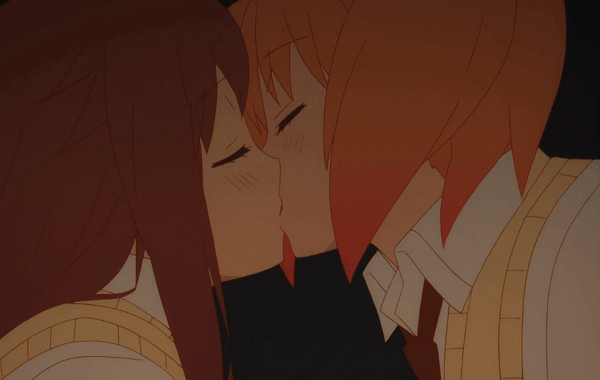