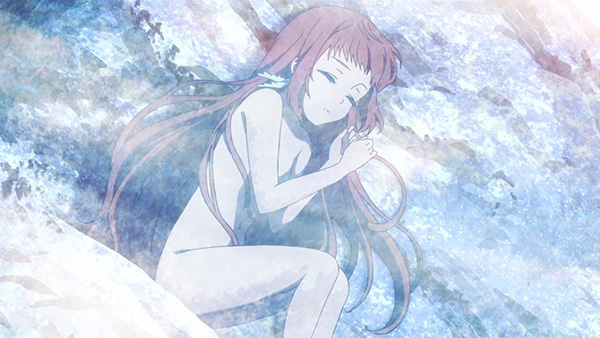 There is something oddly peaceful about turning on Nagi no Asukara every week. In comparison with every other anime currently airing, it’s incredibly quiet and thoughtful. But also beautiful and sad at the same time as you have this constant feeling of not knowing where this is all heading.

True to this formula, this episode has Hikari, Kaname and Miuna explore the desolate Sea Village of Shioshishio following their decision to find out what happened after the cataclysm and to track down the mysterious creaking sound Miuna heard. It’s almost poignant down there in the village during the hibernation and definitely not the romantic vision Miuna had learned of since she was a child. The frozen people creepily resemble bodies while the streets are dead silent. Hikari snaps at Miuna because even he’s unsure of whether they’re alive or not. He manages to visit his father at his old home, lying frozen, and says a few words detailing how life has changed on the surface, even if those words can’t be heard. 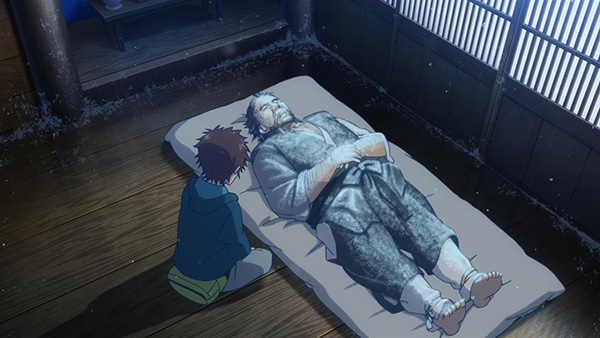 The second half of the anime has been told more or less through the eyes of Miuna and it’s no different here as we learn what she feels for this frozen village which was once the home of her friends. A place where the people she loves grew up yet she herself has never seen. After wandering into the abandoned middle school she has a vision of what the place was like when Hikari and his friends attended it. Outside, she has an encounter with the enigmatic Lord Uroko, the mere “scale” of the Sea God who we haven’t seen since last season. This hibernation is his doing and we still don’t know whether he’s hiding something from his people.

He asks her why she came to the village and she replies by saying she’s looking for Manaka. To this question, he cannot reply for Manaka was a living “wooden maiden” and the sacrifice to the Sea God. He leaves just as Hikari and Kaname arrive to find Miuna. 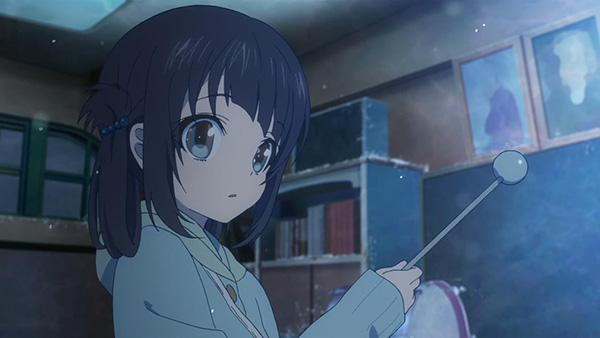 Miuna feels that the crackling sound she has been hearing is Manaka calling out to her, and she follows the sparkling lights and sound to a mountain. Inside are thousands of Wooden Maidens from every boat ceremony over the years. And in the middle is an elaborate pedestal shaped into a hand, covered in a translucent cloth and with Manaka lying inside. So Manaka has finally been found, but they all know that forcefully waking someone up may have unknown consequences.

Lord Uroko appears next to Miuna, who is waiting at the opening of the cave, and says a few fateful words. “When something appears, something else is lost.” No doubt this will have huge meaning in the episodes to come, as Manaka is freed by Hikari once they notice her ena is falling apart, putting her at risk of drowning. In a desperate escape that is sure to invoke the Sea God’s wrath, the three friends grab Manaka and swim back towards the surface. I found the scene when Miuna looks back to Lord Uroko who remained displeased, surrounded by the shaking earth, as if she wanted to talk more. 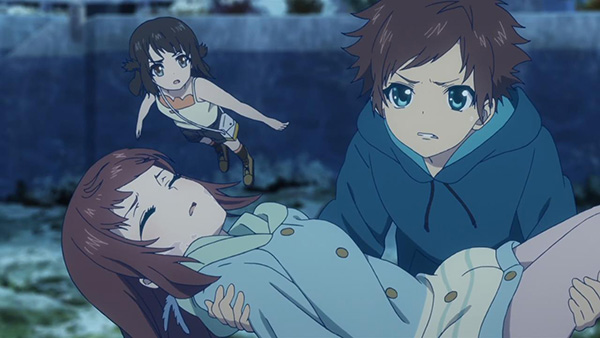 Funnily enough not much actually happened throughout episode 18, which shouldn’t be surprising if you’ve seen the show up to this point. It was more of an eerie, drawn out experience but with sudden action at the end which drove the plot onward. First Hikari, then Kaname and now Manaka has finally been found. What does this mean for the village now that they have forcefully taken a sleeping resident away? Not to mention Manaka has apparently lost her ability to live underwater. It seems like this show continues to raise new questions every episode.