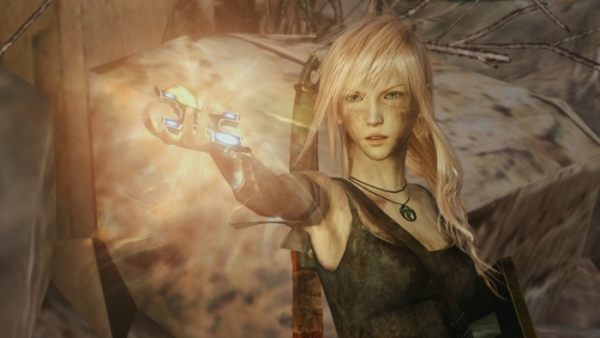 I hate tombs…and the end of existence

That’s right folks, Final Fantasy XIIIs stoic heroine Lightning has received yet another costume to aid her in her fight against the apocalypse. This time, Square Enix has decided to draw upon its other licensed titles and give Lightning access to the clothing of Lara Croft. The costume itself will be based upon the reboot of Tomb Raider, netting Lightning an outfit that has seen better days, a Survivor’s Axe and a Riot Shield.

This treasure hunter garb will join the veritable wardrobe of outfits that Lightning may don to bring a little style to the end of days. North American and European pre-orders allow the pink haired defier of fate to get a little angsty and wield their favourite Buster Sword, complete with SOLDIER uniform. There’s also a Yuna costume, samurai threads and outfits based on the three city-states of FF XIV: Limsa Lominsa, Gridania and Ul’dah.

Well it’s not long now. Lightning Returns to North America on February 11th and Europe on February 14th, for the PS3 and XBox 360. Check out the trailer below and see what happens when you combine two badass heroines together. Don’t mess with Lightning Croft.