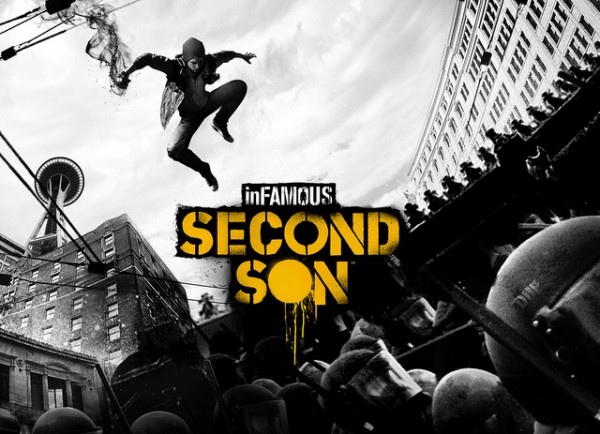 The dawn of the Second Son

With the finale of inFAMOUS 2 leaving players wondering whether or not the franchise would ever see another instalment, the announcement of Second Son was met with accolades and joy. And rightfully so. I was able to get my hands on a brief section of the upcoming title and test out some good ol’ conduit action in a brand new location. Welcome to Seattle with a twist.

Let’s start with the obvious: Second Son features a new protagonist. Say farewell to Cole MacGrath and hello to Delsin Rowe. Now this isn’t new information, but it’s still a major factor of the game that warrants a touch of discussion. Unlike the previous, more mature protagonist, Delsin is a young man with no love for authority. In the brief glimpse I received of the game, this personality really shone through in the dialogue. His quips and jokes give the game a slightly more jocular feel than the last, focusing on a character who enjoys his newfound strength.

Delsin’s personality is also a very powerful facet of the returning Karma system which has been a trademark of the series since its inception. As with the previous games, the Karma system result in a stark divergence that really alters the plot. Playing through the demo twice, I was able to see just how differently things play out depending on your choices. Extending from said choices is a tangential series of missions affixed to your allegiance. Following the path of good, Delsin decides to help reform a quasi-enemy, granting them the opportunity for redemption in his eyes as a Pro-Conduit freedom fighter. This paths leads into combat against drug dealers and expresses the characters’ propensity for justice in a harsh regime. The darker path has Delsin side with their foes violent ways and seek revenge for his persecution at the hands of the DUP (Department of Unified Protection). This leads to conflict with his brother and a much more violent mission centred on harming unarmed civilians who just so happen to disagree with Delsin’s views. 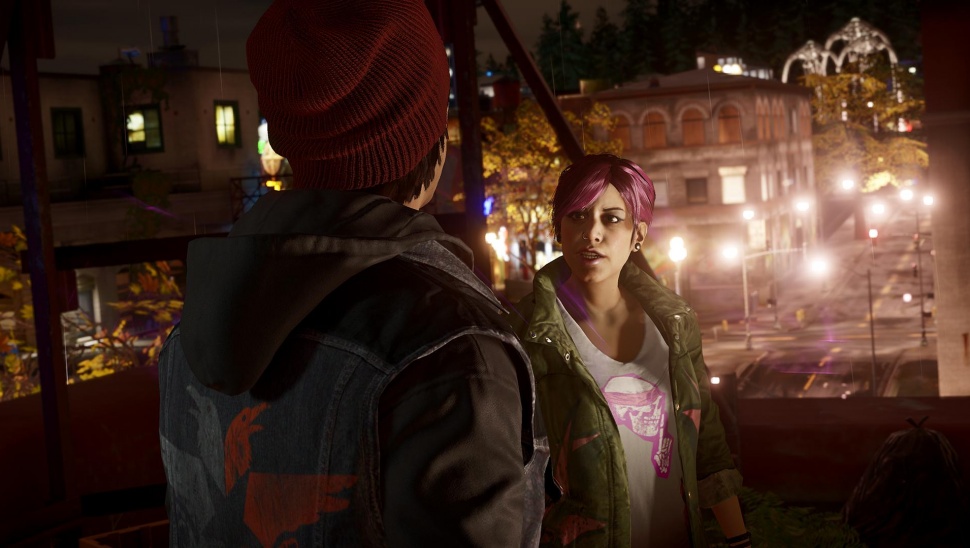 She looks rather Fetching in this light

It’s interesting to note that it is in fact Delsin’s choices that affects the outcome of an NPC’s life, rather than them convincing him to follow a certain path of action. Though this element has been present in previous games, Second Son appears to place more emphasis on Delsin’s personal code of ethics, rather than a “larger than you or me” style plot. This more personal take was also aided greatly by Second Son’s stellar voice cast. Voice actor royalty Troy Baker, Travis Willingham and Laura Bailey each portray Delsin, Reggie and Fetch respectively. It’s all kinds of awesome and their performances gives the characters a depth to them that truly personifies them, even within the short time frame of the game’s demo. Imagine what the full release will be like.

On the gameplay side of Second Son is what everyone loves in a story such as this: Powers. And Delsin has a sweet list to choose from. First off is Smoke, the scourge of cityscapes and also the simplest way to tell if something is on fire. With these powers in hand, Delsin is able to fire standard bolts of smoke from his hands along with a more powerful, wide-casting charged blast. Also available is a stun blast that causes enemies to cough and splutter for a while, until you decide to finish them. He is also able to perform a Smoke Dash and zip up any available vent, bypassing the need for parkour should you be feeling particularly lazy. Or if you’re on the run from the DUP. Should you get tired of literally producing second hand smoke, just absorb a little neon and light up the night with some dazzling attacks. Bolts become long reaching laser blasts with more strength than smoke, whilst stun grenades cause enemies to levitate for brief periods. The dash also handles a little differently as, instead of smoking up vents, you are able to run up any available wall and leave behind a glorious trail while you’re at it. Melee combat is also altered by the equipped power. Whilst Delsin wields a chain when imbued with smoke, his neon powers manifest in the form of a laser sword. Like neon needed anything else to be an awesome power. 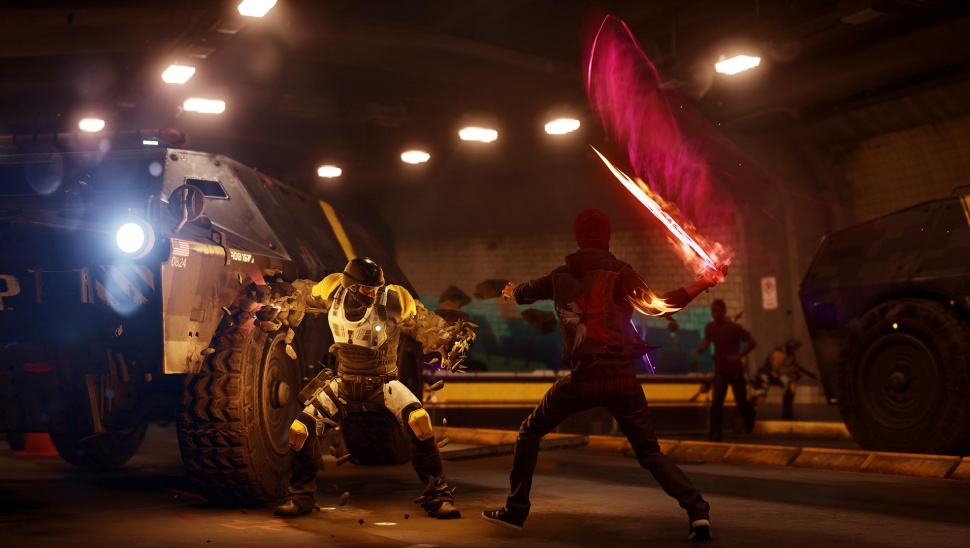 Laser beats rock, everybody knows that

Rather than storing two powers at once and having them drain from a single gauge, you must alternate between absorbed skills. Absorbing a sign will grant you neon and bar you from using any smoke based power. However, should you wish to switch, it’s as simply as finding a smoke source and absorbing it. Regardless of any power remaining, the new element will override the gauge and allow you to use your newly chosen power. With the multitude of power sources within the urban sprawl, in combination with Delsin’s parkour skills, it’s quite simple to rapidly alternate between powers and really mix up combat.

Both sets of powers also include a special finishing move that causes a colossal amount of damage to a wide area, known as Karma Bombs. Featured in the trailers, the Orbital Drop is analogous to Cole’s Thunder Drop skill x100. Available to the neon player is a skill dubbed Radiant Sweep, however, when said move was used in the demo the screen blurred and details were hidden. It would seem that Sucker Punch still wants to keep a few secrets to themselves. I can say this with certainty though, the move is incredibly effective and flashy.

Unlike previous inFAMOUS titles, you no longer need to aim to utilise powers. Instead a reticule is present at all times, allowing you to fire at will and providing combat with an overall better flow. Should enemies be just that bit too wily, there is an additional function that allows you to aim further. Using said skill, you are also able to ascertain enemy weak points and attack accordingly. Red points, such as the head, will result in catastrophic damage and utter obliteration. Blue points on the other hand will merely stun a foe, allowing you to keep casualties low in a Heroic playthrough. This notion is also furthered in combat, where you will occasionally be given the option to Subdue and opponent or finish them. Naturally restraining them nets you some good guy points, whereas kicking them while their down bolsters your evil side. As always, your karmic alignment will be represented by the colour of your powers, such as neon taking on a reddish hue for evil and remaining a pleasant pink for good. Choose wisely. 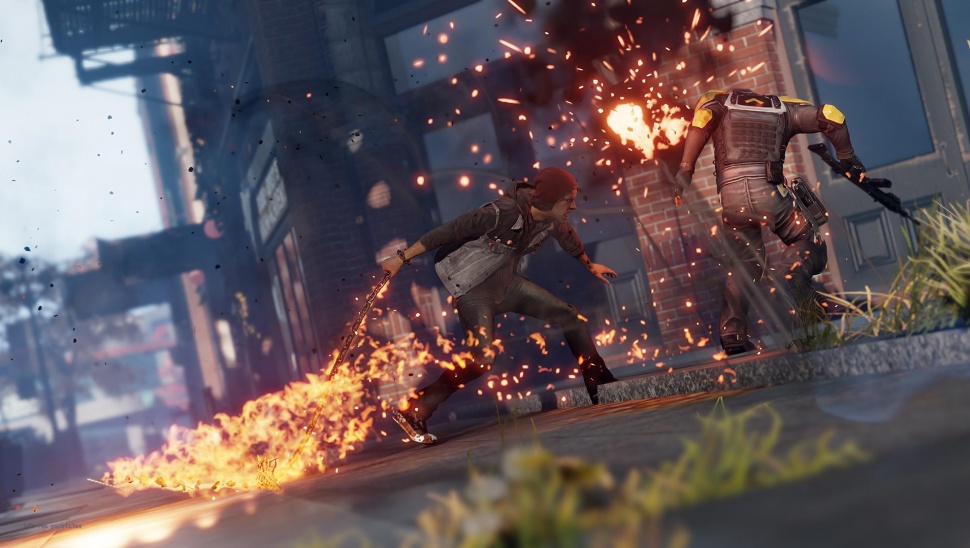 Chain smoking is bad for your health

However, all of this may be easier said than done, as the hypocritical DUP has some Conduits of their own. These foes wield the power of concrete and, as such, pack quite a wallop. In addition to firing shotgun blasts of stone to cause damage, enemies also have the ability to cement you in place, leaving you wide open for further attacks. Higher ranking soldiers possess greater mastery over the element and have a shield of rubble that protects them from a majority of your attacks. Persistence is paramount when dealing with such foes, that and dodging incoming stone. On the other hand, some enemies decide to to take a more traditional approach and simply bring guns to a fight. Though lacking the knockback of concrete, weaponry will often win out in sheer numbers, so don’t take it lightly. Mini bosses may also join the fray with chain guns that can dole out some serious punishment. These foes force you to spend a majority of your time dodging, but when they stop to reload…

As previously mentioned, parkour makes a return once more and serves as the basic mode of transportation for Delsin. However, Sucker Punch seems to have learned from previous games and has added in a number of anti-frustration features, namely the dash system. Though I did mention this power earlier on, I think it’s important to note just how helpful it is. Just as the reticule adds flow to combat, the expedited modes of travel save the game from falling into the travel lull that afflicts other open world games. Parkour is awesome, no one is disputing that, but can you really tell me that you don’t want to bypass it sometimes? Plus, shooting out of a vent as smoke and reforming mid air looks visually stunning, thanks to the new graphics available to the PS4.

Whilst playing the demo, I noticed that one of the greatest visual accomplishments had to be the powers themselves. They look fantastic. Rather than simply creating a light based power, the game really captures the gaseous nature of neon, especially when it is being absorbed into Delsin. The colour also contrasts the environment and creates a unique visual element. Smoke is also presented in a manner that really lends well to the essence of the power. An overall vibe of suffocation which, while sounding horrible, is fantastic in the urban locale. Seriously, when Second Son is released, spend a while just marvelling at the visuals, you shan’t be disappointed. 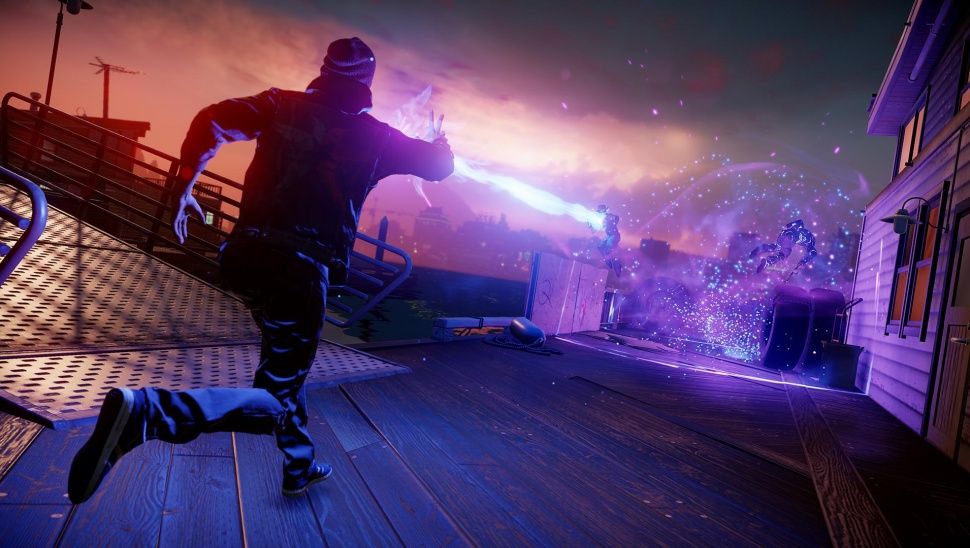 So with March 21st drawing ever closer, it won’t be long until everybody can get their hands on a copy of inFAMOUS: Second Son. Which you should absolutely do. My brief interaction with the title showed me that it truly is the next step in the inFAMOUS series. Whilst the gameplay remains largely the same, it has been tweaked and polished, resolving a number of minor issues that affected the last instalments. Though it’s sad to say goodbye to Cole, Delsin provides a new view on the place of Conduits in the world. A much more raw, emotional view. Rather than the “Saint vs Devil” Karma System we all enjoyed, Second Son’s is more along the line of “Vigilante Justice vs Revenge”. Will you choose to fight for what’s right? Or will you decide to destroy what you consider wrong?