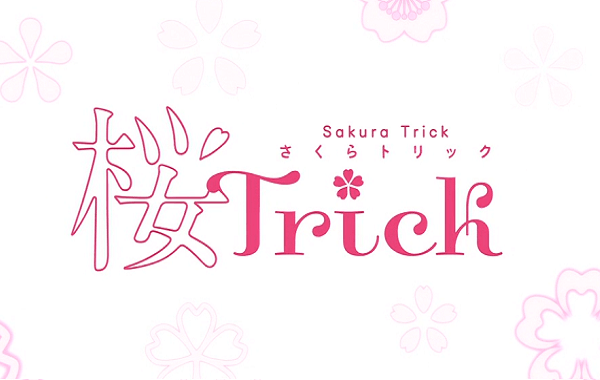 The 2014 winter anime season is upon us and I can already see the cherry blossoms, some of you may think of them as elegant and breathtaking but for me I find them only quite amusing at best. Okay so obviously I’m not taking about the actual flowers but rather a show that bears the name,  with that said I invite you all to join me as I take a look at that the anime Sakura Trick.

Before the OP starts we get an introduction to our two main characters; Haruka Takayama, who is excited about her first day at high school, is woken up in the middle of the night by her best friend Yuu Sonoda. What important matter made her call up Haruka at 12:34 am you may ask? To find out if she packed her pencils… no really, that’s the reason. Yuu rings up a second time to remind Haruka to check what class she will be in and not to show up with food on her face. We are then treated to a zoom into a photo of the two together with three other friends, followed by Haruka falling on her bed saying “Yuu-chan’s the nicest friend ever.” 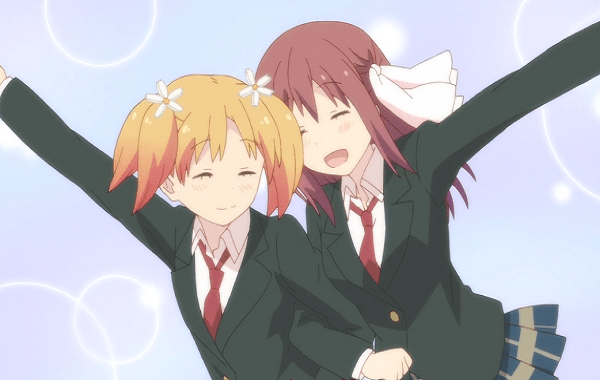 The first half of the episode “Sakura Coloured Beginnings” is used to establish both the main characters and introduce us to the other supporting characters; Iizuka Yuku, Ikeno Kaede, Kotone Noda and Shizuku Minami. Although Haruka and Yuu are the ones that share the special kiss (we will get to that shortly), the other four girls are also paired up. Iizuka is best friends with Ikeno and Kotone introduces Shizuku to everyone. Haruka and Yuu’s relationship starts to develop when Haruka suddenly runs away after seeing other people linking arms (or as she puts it, her treasured spot) with Yuu. After finding her in an unused classroom Yuu suggests they create a memory by doing something they wouldn’t do with anyone else, finally arriving to the long awaited kiss, the 30 second long kiss to be exact. 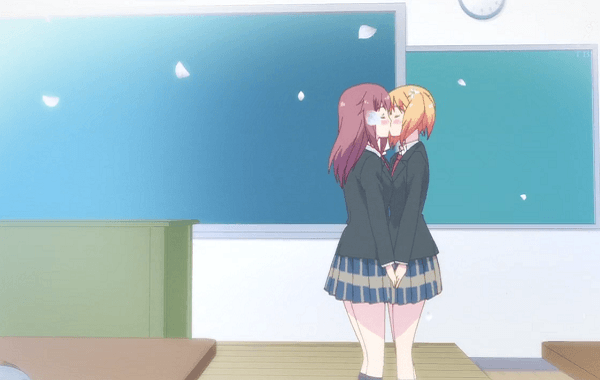 Although only some moments were lightly humorous, the first half does succeed in showing each character’s personality. Haruka is the more sensitive/romantic of the two whilst Yuu is more realistic in her train of thoughts, not really what I was expecting considering she is smaller and cuter then Haruka. The balance between pairs can also be seen the supporting characters with Ikeno winding up the serious minded Iizuka, and the outgoing nature of Kotone helping the more reserved  Shizuku is a nice friendship in the making.

The second half of the episodes titled “Yakisoba, Verandas and Girls” is based around Haruka and Yuu trapped in the same unused classroom where they had their kiss. To avoid being caught by some incoming teachers they decide to hide outside on the veranda, once they think the coast is clear they walk back in to discover the teachers had locked the classroom door.

There are still moments where the humour is just weak/ stupid, but there are three golden moments that occur that put this story far ahead of the first one, making it a great way to end the entire episode. The overall goal of delivering yakisoba to Iizuka and Ikeno is a great set up; it frequently shows scenes of the two girls waiting for Haruka and Yuu to return and ends in a nice, unpredictable way. The tone Yuu uses for one line after she kisses Haruka is just hilarious and the story has the most awesomely impossible way to jump across verandas I have ever seen, I couldn’t help but admire what a ridiculous yet enjoyable scene it was. 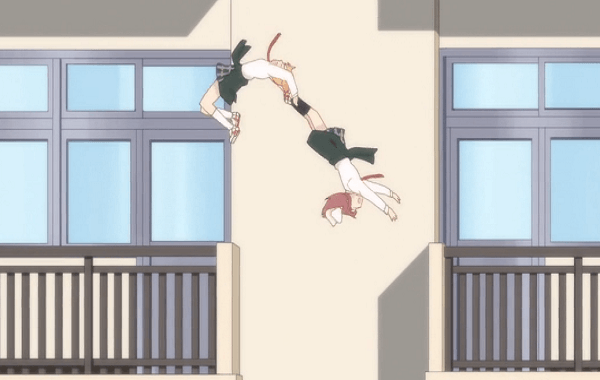 One thing that did bother me about this episode was the amount of fan service that was used; there was only one scene where chest grabbing was essential to a joke and although it was used periodically, it didn’t add anything to either story plot. There are a few fan service bits in the opening theme so I recommend skipping it if you are in company. The theme song does fit the overall tone of the show as it is light hearted, upbeat and does put you in the mood for a light comedy show. The ending is also joyful and leaves you in the same state of mind you had when you first entered the show, again a few fan service scenes are added and some will find the chibi versions of the characters adorable.

Overall I found the first episode of Sakura Trick to be good; nothing to write home about, but also not bad enough to put you off watching the show. The first half gave us an insight into each character and the second half gave us that wonderful veranda jump (seriously it’s just straight out funny), an average show that does have its moments.