Gnomoria is a sandbox strategy game which evoked within me a vast richness of emotions. On the one hand I was infuriated by the lack of tutorial/any form of in-game guide through the interface but on the other I  experienced pride for whenever I overcame the ignorance I had of the interface through trial and error. I experienced despair at the lack of ability I had in indirectly ordering the gnomes of my kingdom to build a well and then watching impotently as they slowly die of thirst because they instead choose to clean out the dirt from their tunnels. Evidently the gnomes I had were suffering from severe cases of Obsessive Compulsive Disorder as cleanliness took precedence over life itself. All the while however, I could not stop playing.

The nostalgia for old school Dwarf Fortress was most definitely a factor in why I persevered past my initial dismay at the lack of direction. Instead I simply followed my natural instincts (honed after years of ‘fun’ in Dwarf Fortress) and found the game to be quite intuitive. For those unfamiliar with Dwarf Fortress; the game puts you in charge of a dwarven expedition as it seeks to build up a new hold. You start off with a handful of miners, farmers, and craftsmen which can then become a mighty dwarven kingdom filled with riches and height-impaired subjects. However, if The Hobbit has taught us anything, it is that even the mightiest dwarf hold ends up falling due to the attentions of a dragon, an invading goblin horde, or (my personal favourite) total anarchy brought about by a drunken brawl gone completely out of hand. The game is less about winning as it is about losing slowly… or as those who are more familiar to the game would know it: ‘Fun’.

Gnomoria does not mess around with this formula too much. In fact, replace every reference to ‘dwarf’ with ‘gnome’ and you’d pretty much have it. Granted, Gnomoria makes the interface much prettier than it’s predecessor, which doesn’t say much but it is most definitely a welcome improvement. I have yet to notice too many changes to gameplay, although I was somewhat disappointed by the lack of a ‘world generator’ which not just generated map for you to play on but also an entire fictional history to the world you will be playing in. This however is a small quibble and to showcase just how similar the gameplay is, I’ve written up a recount for two of my gnomish kingdoms/workers republics. 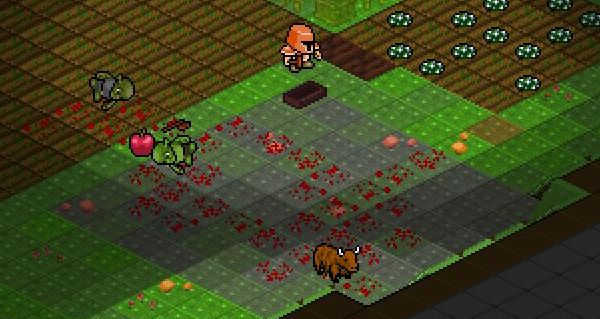 Kingdom of the LOLs:

Lets face it, it’s my first time with this game and without a tutorial to guide me through it I knew I would be failing in a range of hilarious ways so I might as well embrace it. I started off by following my instincts digging into the side of the mountain. I had carved out a nice little little hole in the wall for my expedition. Save for the occasional incursion by a monitor lizard who scared the bejeezus out of both me and my gnomes, things went along peaceably. I had no idea what I was doing or how to do… anything so often when I sent my forager gnomes out to supplement our food supplies with wild berries and apples, they would fall asleep in the mud. 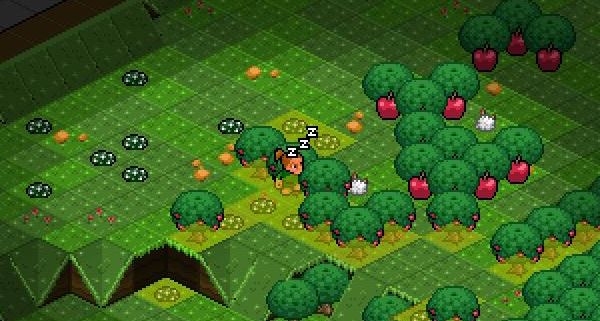 I then determined that I should pre-empt my drinks shortage by building a distillery and turning some of that sweet, sweet fruit I had just collected into wine (because nothing cures dehydration quite like alcohol!). By following the prompts from the list of ingredients needed to build this hallmark of gnomish civilization, I determined I would have to start with a ‘crude workbench’. One of the requirements for this bench of +1 to crudeness was a stone resource. I spent two days of game time hollowing out a mountain, hunting for rock walls of any kind. By the end of it, I had begun to despair of ever being able to build my simple workbench, let alone a complex distillery. But then after excavating 8 floors down into the ground, I finally found it. Granite! Igneous gold! I was so happy to finally be able to build that motherf#$%ing workbench that I gave it its own room in the hold. 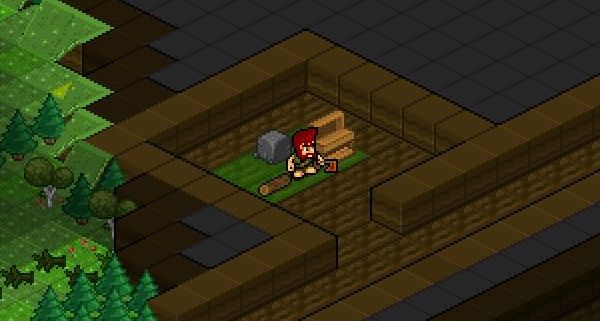 I had expended so much effort in building that gorram workbench that I felt like it was an equal member of my gnomish society. While I was busy giving full citizenship to inanimate objects and building my distillery, a full blown drinks crisis had developed. We were completely out of booze. The yaks provided me with a steady trickle (da dum tsch) of milk which my gnomes were so desperate to drink that they just sculled it as soon they milked the yak, possibly going so far as to suck on the teat directly (hooray for imagery!). In terms of my distillery, I had put myself in between a rock and a hard place wherein I could not ferment any of my fruit because my food stocks were too low already, so I would simply be swapping a drinks shortage for a food shortage. I needed to find another grove to forage from and quickly. To the far west I found my saviour (Cue ‘hallelujah’ music). 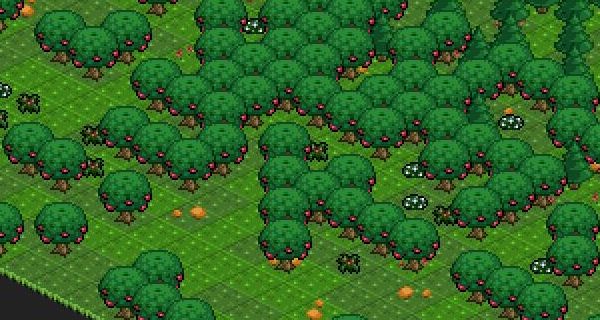 I sent my foragers off to quickly collect the fruit so we could start fermenting gnomish moonshine ASAP but, as they went about their business, tragedy struck. Goblin raiders ambushed and murdered my foraging gnomes and made quick work of my defence force (which consisted of one brave gnome wielding an axe and armoured with a helmet and breastplate). The goblins overran my hold, slaughtered the inhabitants, and (I assume) stole the two yaks I had. Just like that, the gnomish Kingdom of the LOLs fell into ruin.

For my next hold, I decided I would roleplay a bit now that I had gotten some handle (albeit shaky) on the gameplay mechanics. I find it very amusing that my gnomes would dig out tunnels until they collapsed from exhaustion and when they woke up once more they would continue on with their tunneling like the dutiful worker drones they were. It had the feel of some sort of Dickensian nightmare or dystopian Stalinist dictatorship… So velcome comrades, to glorious Republic of Gnomehstan! Vith love of party in hearts and song on our lips ve vill tame vilderness to create land vhere gnomes can prove superiority to stinking dwarven empire.

First off, I had the fortune of having one of my original gnome character models wearing a monocle. I renamed this particular gnome ‘Chairman Napoleon’ and although all gnomes were equal in the Democratic Republic of Gnomehstan, Napoleon was more equal than the rest of them. I was able speed through development much faster as I struck bedrock much sooner. I was able to avoid the crippling food and drink shortages which plagued me last time by quickly setting up my farms, groves, and distillery. The comrades of the Republic of Gnomehstan wanted for nothing… except beds which I could not make as I didn’t have animal bones with which to make needles for a tailor and straw beds were out of the question as all straw on hand went towards feed for the yaks. Beds were a luxury that the we could not afford… however Comrade Chairman Napoleon received one due to his excellent leadership to serve as an example to the rest of the gnomes of what the republic could achieve for them. Unfortunately, we still didn’t actually have any chairs to spare at this point…

I had learnt from my last game that constant vigilance was the price that gnomes had to pay survive. So when gnomads (sic) arrived, I immediately conscripted one of them to a squad named ‘Gnomingrad’s Defence Brigade’ (GDB). I put the GDB on constant training just outside the entrance to the hold. The soldier dutifully stood at attention outside in the rain and heat. Collapsing from exhaustion and getting back up intermittently. Sure, the poor sod became dreadfully unhappy, but happiness was a luxury that we could not afford. 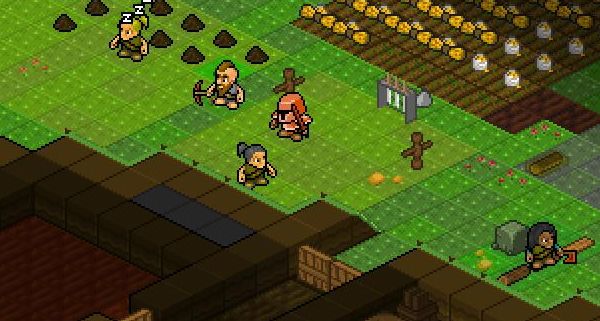 The stratagem ultimately paid off when goblin raiders were detected quickly and engaged. The battle was not going well for the Gnomish force to start with until I realised I wasn’t playing as accurately to my character as I could be… I then immediately set about conscripting the rest of the gnomes in the hold to held defend the motherhold. They all ran to the frontline armed with whatever tools they could arm themselves with. The miners had their pickaxes, the woodcutters their felling axes, and the rest of conscripts ran in with their bare hands and a zealous devotion to the Republic. In no time at all, the goblin invaders were overwhelmed. Their bodies were turned into sausages to feed the hungry gnomes who had killed them. Napoleon was drunk on victory (and strawberry wine) which led to the hold’s downfall as he then sought further glory by sending the gnomish conscript army to hunt down a bear which was spotted nearby. Needless to say, none of them returned as victory turned out to be a luxury we could not afford…

So there you have it. My disastrous (but fun) first run at Gnomoria. The interface is fairly intuitive (once you know what to look for) and the visuals are nothing to really write home about but are do the job well enough. This is not a game for those seeking out a visual smorgasbord. This is a game for those who want to take the time to plan and build their glorious gnomish hold before watching it all collapse. This is the kind of game which creates stories. This is the kind of game I love.

But enough about me, tell us about your own mighty holds in Dwarf Fortress and Gnomoria, alongside with how they met their downfall.